US airline strategy: It may just be time for a rethink

WEEKLY REFLECTIONS WITH RON KUHLMANN & THE CENTRE. On October 19, the Air Transport Association’s Office of Economics released a report entitled “Industry Review and Outlook”. It was a sobering reminder of two facts. First, a viable aviation industry is a vital component of national and global economic health. Like the railroads in their heyday, airlines provide the means by which the now-global village is interconnected. Second, the ability of the industry, and particularly US carriers, to even recoup the cost of capital—much less make a profit—remains in peril.

And no wonder. The industry is buffeted by technological complexity, susceptibility to weather and other natural forces, almost everywhere has far more government and regulatory involvement than necessary - except in places where government inaction impedes progress. And, not least the business is especially vulnerable to wild swings in its primary resource, fuel. Add to that mix the sexy appeal of flying which makes starting an airline relatively easy, so that newcomers are a constant threat, and one must be amazed that the whole distorted mess has held together as long as it has.

Despite its proven importance to the US economy, the airline industry has not been especially well (or at least intelligently) treated by its government, which has yet to be introduced to an aviation tax that it did not like. It has also been painfully delinquent in updating the national ATC grid, adding costs, frustration and delay for both airlines and consumers.

All of this is well and aptly chronicled in the ATA report, which leaves one with the urge to make certain that there are no airline stocks in one’s portfolio. It is indeed a bleak landscape, albeit one that has been unchanged over many years.

Just when you were feeling sympathetic…

However, what is missing is the rest of the story. ATA gave plenty of attention to the reductions in service, aircraft and market value, but made no mention of the fact that up until relatively recently most US airlines ranked success not by earnings, but rather by market share. Go back just 10 years and you will find carriers dumping capacity into markets simply to say that they have “the most frequent service” or, more menacingly, to kill the chances of a startup challenger.

The ATC system is indeed in great need of renovation, but then check the number of departures scheduled at many hub airports between 17.00H and 18.00H and it will become immediately evident that even under the best circumstances, with state of the art equipment, there will likely be delays due to airline overscheduling. The report touts improved US domestic performance without noting that it has been actually a byproduct of more rational scheduling and capacity, as schedules have been reduced.

And then there are some fairly interesting cause and effect conclusions (page 46) such as;

Regarding the first point, just who is setting the fares and who is responsible for monitoring expenses? Isn’t that the carriers themselves? If carriers perceive that it is necessary to price below cost in order to attract travelers, how is this the consumer’s fault? As passengers are we meant to ask whether or not our fare is paying the bills, and if not, pass the hat?

The second observation is equally suspect for a number reasons. First, the late 90s happened to be a period in which companies and individuals were willing to pay rather extraordinary amounts for travel. This was especially true in premium where fares could easily top $10,000 for a one-way first class transatlantic ticket. This willingness to pay made the period one of rare profitability for some carriers. Consensus is that those days will not return.

But even before the 2000 tech collapse and 9/11, the airlines were seeing this bubble pop as the economy cooled. Nonetheless, increasing numbers of seats were allocated to these luxury cabins, believing that this was the long awaited golden goose. Perhaps there was just a little poor planning on the part of the airlines?

Then 9/11, the universal traffic collapse and the vindication of simpler business plans understandably reduced both the number of travelers and the fares they were willing to pay. Consequently, by comparing the peak to the valley, point two can be presented – but there is a lot more back-story to the statement. And the airlines are not unique in this. Right now it is better to be Target than Tiffany’s.

The ultimate weakness in the report is twofold:

A record number of Americans are unemployed. Many of the rest are nervous and reluctant to spend. Airline customer service in the US is, by all measures, rated poor and still declining, by consumers. These are realities that exist, and the downturn in travel as well as the demand for low fares is attributable to those realities. So exactly why are we surprised at the statistics? And if that is the reality, what is the plan to adapt?

Time to recalibrate the model

Asia Pacific airlines, long the envy of the aviation world, both for service and profitability, have been the most hard hit by the current downturn. In a report by the Association of Asia Pacific Airlines (AAPA) presented in September, similar conditions were cited and a spectacular fall from profitability to loss was also chronicled. However, the presentation was entitled Navigating Through Turbulence. In other words, like turbulence, this is a temporary condition, needing everyone’s full attention.

Many of the same sad statistics regarding the long-term performance of airlines were cited as well as a large serving of current bad news. The difference, however, was to be found in the fact that the AAPA’s report focused on future opportunity and ways in which the current mess might be endured.

Tough times, airlines focused on survival whilst preserving ability to respond to any upturn

AAPA stated it does not “blame” the market for its woes, but rather notes the actions that have been taken by Asia’s carriers to survive in the current environment while “preserving ability to respond to any upturn”. You know, like a plan?

The AAPA carriers have:

There is an important and fundamental difference exhibited in the AAPA presentation. Rather than seeing change and passenger reduction as a sign of impending doom and further proof of Armageddon, the Asian carriers view these actions as an understandable, if unpleasant, response to current conditions. But at the same time keeping the flexibility to adapt to an upward swing. The fundamental difference is attitudinal. This glass is half full - not half empty.

Same story, different place. In an address to the European Parliament on September 30, Ivan Misetic, CEO of Croatia Airlines and current Chairman of the Association of European Airlines (AEA) also highlighted the positive economic benefits attributable to airlines as well as reciting a litany of ills that have rocked the AEA carriers in unprecedented ways.

But again, there was a different focus. Imagine this statement being made (credibly) by most US carriers: “We depend on the satisfaction of our customers. Given the competitive environment in which we are flying, we want our customers to be happy and need them to be fully satisfied… Airlines are service providers where consumer satisfaction is key right after safety and security concerns.”

And, like the AAPA, there is a sense that we are in a special moment and actions being taken are not signs of long-term decline but rather are necessary to deal with current conditions. He also said, “I would actually like to make a distinction between crisis relief measures that are of a cyclical nature and embody a crisis management plan for the next 6 months and a more strategic and structural long term action plan for the next 5 years.” Again, that plan thing.

There is universal agreement that the current situation is dire and that even dramatic programs will only lessen the impact. It has been an equal opportunity downturn, striking healthy as well as marginal airlines and has been even more destructive following so closely the fuel spike of last year.

But among the three major markets, one has chosen to see these challenges as yet another roadblock to sustainable operations. If only people would fly more, or pay more, or make the cost of fuel more predictable, we could move ahead. To emphasize their sorry state, the last page of the ATA report reiterates the “immediate challenges [that] loom large”.

The Europeans ask their elected leaders for help and for modernization of the airways. They also are moving ahead with cross border consolidation that looks to continue with a deal (maybe?) between BA and Iberia. 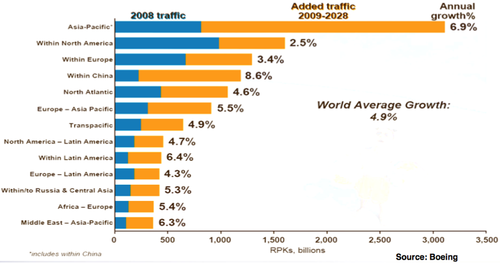 The message is clear; shut the door, lament the problems and wait for better days. Oh, and maybe some more bailouts and Chapter 11s. That’s a strategy?