Asiana Airlines, South Korea’s second largest airline by revenue after Korean Air, reported a sharp reduction in operating profit in the three months ended Jun-2011 (2Q2011) as a result of the combined impact of the 11-Mar-2011 Japan earthquake and tsunami and high oil prices. The carrier however returned to the black at the net level in the quarter.

See related article: Korean Air swings to net profit but in the red at operating level

Investors have preferred Asiana Airlines' shares over the past 12 months, sending its stock around 10-20% higher against Korean's 15-20% fall.

Shares price comparison for Korean Air, Asiana Airlines for the past 12 months 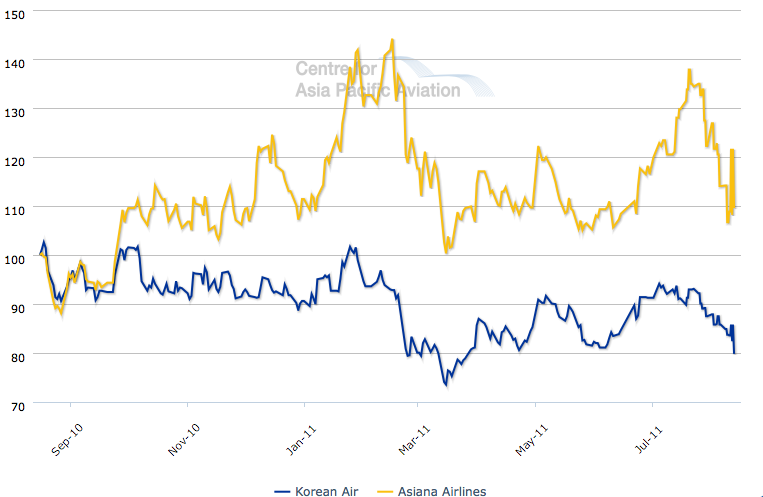 During 2Q2011, Asiana Airlines’ operating profit slumped 64.1% to KRW49.75 billion (USD46.1 million) for an operating profit margin of 3.8%. Net profit stood at INR17.72 billion (USD16.4 million), an improvement from a net loss of INR4.65 billion (USD4.3 million) in the previous corresponding period, and resulting in a net profit margin of around 1.3%. The year-earlier net loss was mainly due to foreign exchange translation losses, the company said.

Asiana's revenues increased 6.6% year-on-year to KRW1.310 trillion (USD1.22 billion) in the quarter. International revenue was the largest contributor to the carrier’s revenue base, at 56.1% of the total, followed by cargo revenues, which comprised 28.5% of the total.

Asiana Airlines’ revenue growth was, however, outpaced by a 22.9% year-on-year increase in operating costs, driven by a 36% increase in fuel costs. Fuel costs, as expected, represented the largest operating expense for the carrier in the quarter, at 37.5% of the total. Labour expenses, the second largest cost for the carrier, represented a significantly lower portion of total costs, at 11.0%. 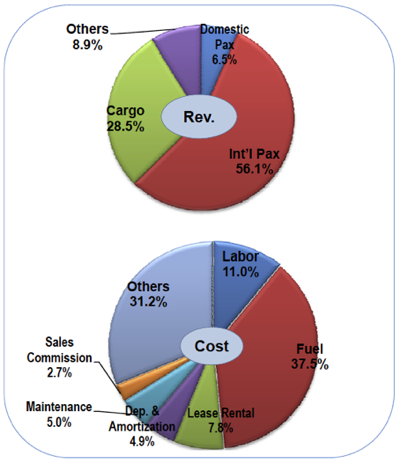 USA the largest market for Asiana Airlines by revenue

The largest market, both in the passenger and freight revenue for Asiana, a predominantly international airline, was the US, contributing 21.4% of passenger and 46.6% of cargo revenues in the quarter. The second largest passenger market for Asiana Airlines, by revenue, in the second quarter was China (19.5%) followed by Southeast Asia (19.0%). 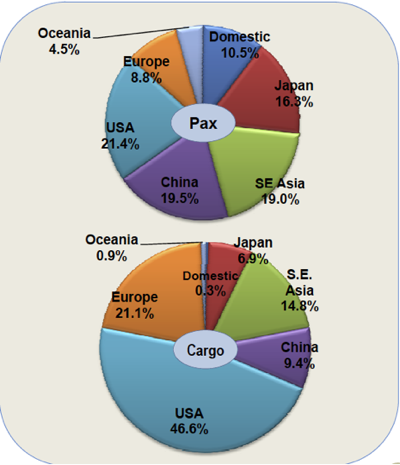 Overall Asiana Airlines’ international traffic (RPKs) growth stood at 3.5% in the quarter, with actual traffic reaching the third highest quarterly level on record after 1Q2010 and 3Q2010. Inbound traffic and transit passengers have been stronger in the first half of 2011, whereas outbound traffic has been generally weaker. 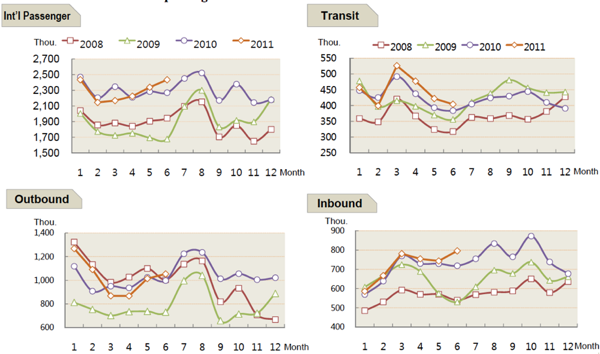 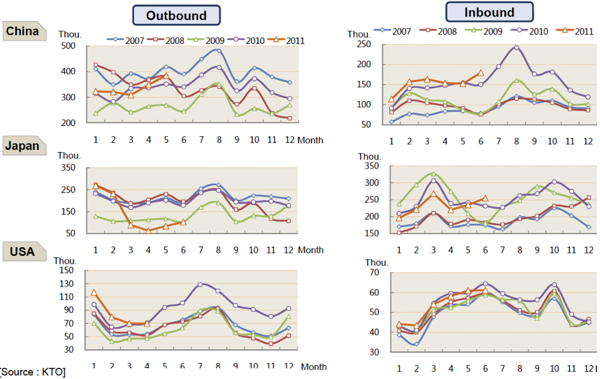 The overall international traffic growth occurred despite a considerable 21.7% slump in Japan traffic due to the earthquake impact, with traffic to Oceania also considerably weaker, down 17.0% year-on-year.

Commenting on passenger demand trends, Asiana noted that "South Koreans chose China and Southeast Asia over Japan in May and June and the company focused more on oil hedging (during the second quarter), which helped keep the quarterly operating profit from falling further”. The carrier also noted that due to the passenger demand increment to China and Southeast Asia, international traffic increased by 3.5%, outpaced by a 10% yield increase.

Following the USA, Europe (21.4%) and Southeast Asia (14.8%) were the next two largest freight markets for Asiana Airlines, in terms of revenue generation, with these three markets also being the largest markets by traffic (RPKs).

Overall cargo traffic (RTK) increased by 5% over the same period in 2010 to reach a new high, driven by inbound demand. However, yields declined by 6% due to a strong base for comparison last year. 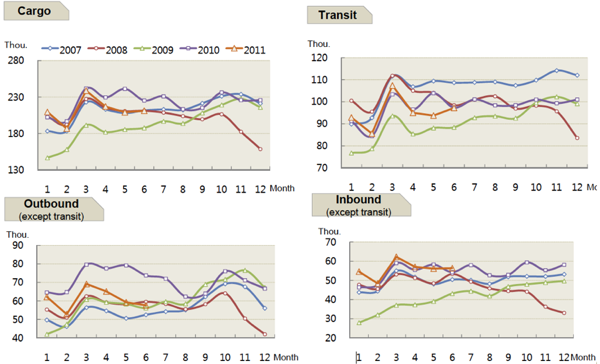 However, yields were strong on China routes, increasing 19.9% year-on-year. Japan saw the largest yield improvement, of 21.7%, with the US seeing the only double-digit decline in freight yields, of 12.7%.

The carrier expects to end the year with 71 aircraft in its fleet, increasing to 79 by the end of 2012. This will be boosted by the addition of seven passenger and one freighter during 2012. The carrier stated it is scheduled to take delivery of six A380s between 2014 and 2017, for deployment on long-haul routes, and 30 A350XWBs between 2016 and 2022, for deployment on mid/long-haul routes.

Looking forward to the peak third quarter, Asiana Airlines will benefit from lower oil prices and a one one-time capital inflow of around KRW570 billion (USD528 million) from the sale of its stake in Korea Express Co, the country's largest logistics company by sales. This will help reduce the carrier’s debt levels, which stood at KRW3.1 trillion (USD2.9 billion) at the end of 2010. As at 30-Jun-2011, Asiana Airlines had a debt ratio of 587.7%, down from 603% at Mar-2011 and 636.3% as at the end of 2010.

The cargo market also appears to have softened, reflecting weaker economic conditions in North America and Europe. All eyes will be on the strength of this year's peak cargo period that will start to build in coming months. 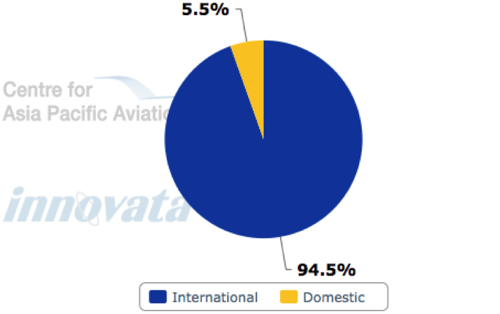 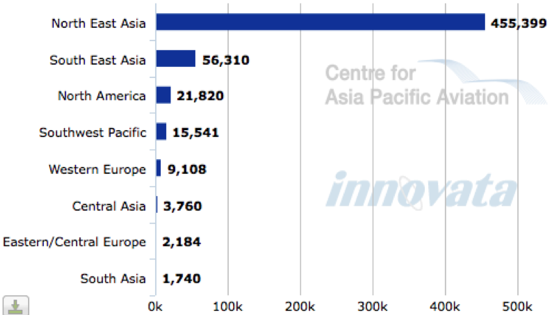