Asian airline margins being squeezed but are faring better than in other regions: AAPA

Airline margins have been “squeezed” in 2011, due to sharply higher fuel prices, according to the Association of Asia Pacific Airlines (AAPA), although the association noted that the region’s airlines are faring better than airlines in other regions as they continue to benefit from relatively strong economic growth in developing economies across the region.

AAPA, at the 55th Assembly of Presidents in Seoul earlier this month, stated its member carriers remain "extremely vigilant" about the immediate threats to growth and profitability associated with a potential slowdown in the global economy and fuel prices that have already risen 40% this year. The association also cautioned that while strong domestic spending is ensuring key Asian economies remain resilient, there is increasing concern about the possible impact of further financial instability in Europe and the US moving into 2012.

AAPA director general Andrew Herdman has also noted the structural changes occurring in the region. “The traditional distinctions between full service network carriers, and low cost carriers focusing solely on short haul point to point routes, have become increasingly blurred over time. The recent development of a number of new joint-ventures between traditional carriers and new entrants, seeking to combine their respective strengths and tap new markets is testimony to this trend,” he said upon the release of the association’s Oct-2011 traffic on 24-Nov-2011.

The scope for further growth is considerable, with the region now generating 27% of global GDP and being home to more than 4 billion people, or 62% of the world’s population. Operations are supported by a growing fleet of 4390 aircraft. AAPA forecasts global air travel demand to double over the next 15 years, led by growth in the Asia Pacific.

Mr Herdman also noted that leading Asian carriers have the highest market capitalisations in the global industry. As a result, if ownership regulations are liberalised, global consolidation is more likely to be led by Asian carriers as European or US carriers would lack the cash needed to pursue acquisitions in Asia. “It is money that talks,” Mr Herdman said. “Think about that if we do get further liberalisation of control. Certainly Asian carriers will be even more important in terms of players on the global stage.” 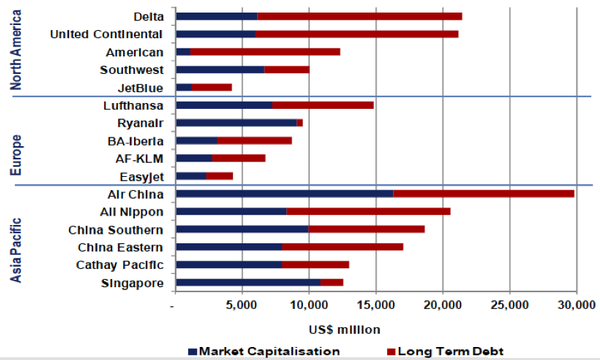 AAPA members handled 16.5 million international passengers in Oct-2011, a 5.0% year-on-year increase. Passenger numbers have increased in all but one month (Mar-2011) of 2011 and in every month of 2010. Mr Herdman said the region's carriers have continued to see growth in demand for both business and leisure travel. 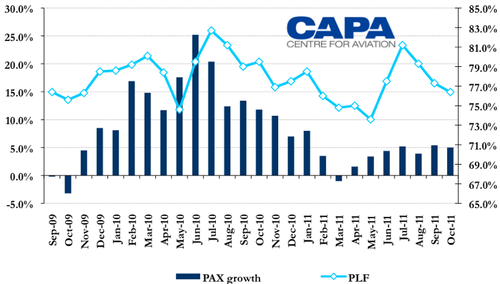 International traffic (RPKs) increased 5.1%, outpaced by an 8.8% capacity (ASKs) expansion as a result of additional aircraft deliveries and resulting in a 2.7 ppt reduction in load factors to 76.4%. International capacity growth at Asia Pacific airlines has exceeded traffic growth for the past 11 months. As a result, load factors have also declined for the past 11 months (Dec-2010 through Oct-2011) after 16 consecutive months of year-on-year gains between Aug-2009 and Nov-2010. 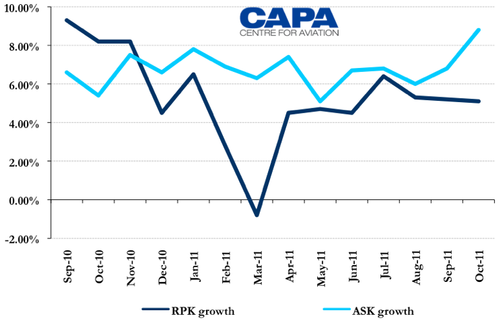 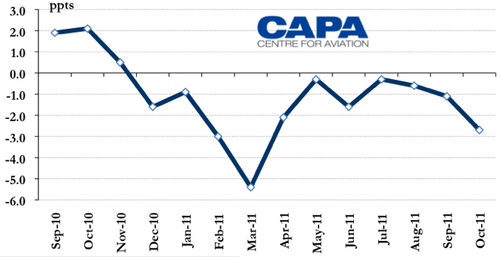 International air cargo markets showed further weakness in Oct-2011, with the region’s carriers feeling the impact of slowing Asian exports as a result of slower economic growth seen in Europe and North America. 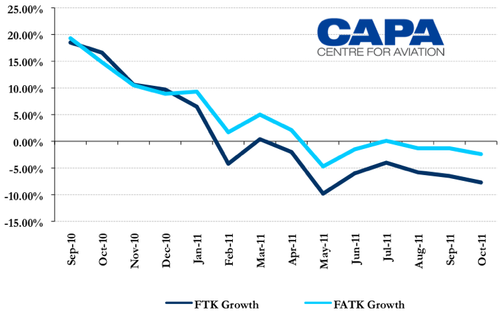 Mr Herdmann, meanwhile, stated that while aviation will play a key role in global economic recovery, it is struggling with the impact of new taxes and regulations. Governments should remember "that aviation is a key contributor to economic recovery and job creation, led by travel and tourism", he said at the Assembly of Presidents. "Taxing the very people who you want to attract as visitors to your country is neither an effective welcome message nor a good way to develop the tourism industry," he added.

He also lamented that airlines are increasingly subject to "an ever more complex web" of regulatory requirements. A key part of this is the European Union’s controversial EU Emissions Trading Scheme (ETS) scheme, which AAPA believes is an over-reach in the authority of the EU.

Asian carriers continue to be impacted by weakness in the inbound Japanese leisure market as the recovery from the Mar-2011 earthquake and tsunami has been much slower than initially projected. However, the overall outlook for Asian carriers is relatively positive as growth in Asia is expected to continue outpacing growth in mature markets, particularly Europe, by a wide margin.