Asia Pacific airlines are coming off a difficult 2011, thanks to stubbornly high fuel prices and weaker yields in a challenging global economic environment. But not all the problems are necessarily external. Overcapacity is looming as a threat in 2012 as the region's full service airlines gear up for a period of growth and change in the coming decade. Balancing capacity and demand in choppy and unpredictable economic times is not easy and the coming year looks like being one in which at least temporary oversupply is very likely.

Record aircraft delivery levels are being maintained even as traffic growth slows. The upshot of that combination of factors is lower load factors and reduced yields, made more notable as the finance sector - a key user of premium services - is undergoing sometimes savage staff cutbacks. That in turn implies damage to airlines' bottom lines in what is now an intensely competitive market, with low cost airlines, Gulf carriers and Chinese airlines each vying for larger shares of markets which were historically the territory of the region's flag carriers.

International capacity growth by Association of Asia Pacific Airlines (AAPA) member airlines exceeded traffic growth in 2011. Load factors suffered as a result, in what was a challenging year for airlines worldwide. Asia Pacific airlines were impacted by a series of natural disasters in 2011 and continuing uncertainty is expected in 2012, according to AAPA in releasing preliminary traffic results for 2011.

AAPA noted that uncertainty over prospects for the global economy in 2012 has “somewhat overshadowed the immediate outlook, and airlines worldwide are bracing themselves for another challenging year ahead”. In the longer term, AAPA stated that “Asian airlines still remain optimistic about longer term growth prospects, as evidenced by ambitious fleet plans, ongoing service enhancements, and the launch of innovative new business ventures”.

Trend of surplus capacity to continue in 2012

The trend of surplus capacity is expected to continue in 2012, as foreshadowed by IATA in its Dec-2012 financial forecast, with a demand-supply imbalance likely to have a negative impact on load factors and yields, and hence profitability.

Consequently concerns are again emerging that airlines have over-ordered aircraft, with Asia Pacific airlines particularly vulnerable given their significant on-order fleets, encouraged by strong growth in the past two years.

Overall, Asia Pacific airlines (including Chinese airlines and LCCs which do not belong to AAPA) have 520 aircraft on firm order with manufacturers for delivery over the next three years (2012 through 2015), of which 120 are widebodies, foreshadowing continued capacity expansion in this region, with many of the new deliveries acting to be additional - not replacement - aircraft. This equates to 15 aircraft deliveries per month, which could increase to a rate more than double this based on leased additions.

Much of the region’s growth will come from Chinese airlines, both the ‘Big Three’ and the second-tier carriers, as they expand their presence in the region and increasing in long-haul markets. According to OAG Fleet iNet, Chinese carriers are scheduled to receive over 160 aircraft in 2012, followed by around 360 aircraft in 2013 and 100 in 2014. The nation’s current fleet size is 1719 aircraft, with 663 aircraft on firm order. 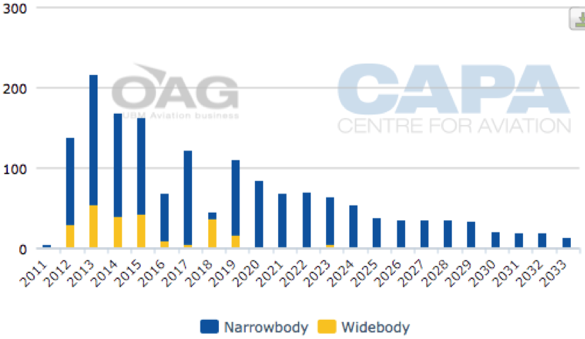 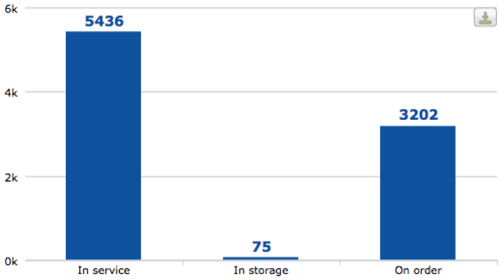 Globally, single-aisle aircraft to rise by 20%, while widebody deliveries rise 91%

BOC Aviation head of strategy and market research, Peter Negline, in IATA’s Analyst Viewpoint for Oct-2011, stated global annual single aisle aircraft deliveries (100+ seats) are due to rise by 20% from 2010 to 2013. He continued: “More alarmingly, annual wide-body aircraft deliveries are due to rise by 91% over the same period – due in part to previous delays in the programmes for the B787, B747-8 and A380. Together, this 33% jump in annual production over the three year period equates to an extra 350 aircraft deliveries per year”. He continued: “More worryingly, the growth in production rates does not stop in 2013.” 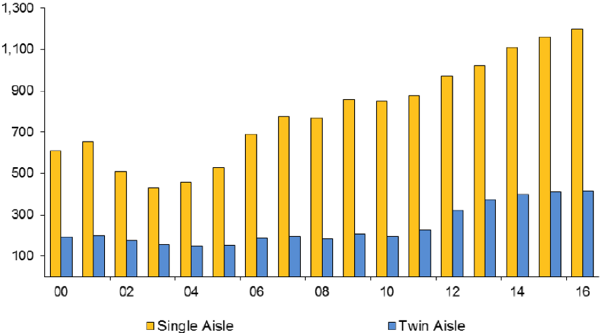 Part of the motivation is driven by higher fuel prices and environmental challenges. Mr Negline stated there has been a “ferocious appetite for new, fuel efficient aircraft” in 2011, with orders, especially for narrowbodies, now well above their previous peak in 2007. The 2011 order spurt has been driven by high oil prices, demand for improved fuel efficiency gains, fears of a protracted period of US dollar weakness and replacement aircraft demand in the US, Mr Negline said. A significant portion of forthcoming deliveries will be for replacement of older aircraft. 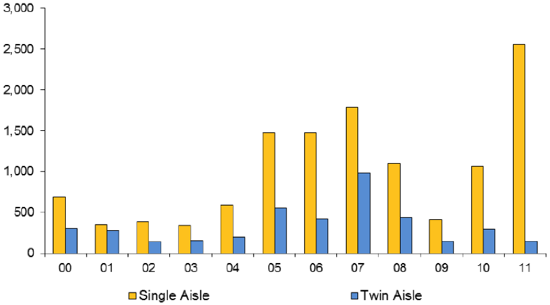 Source: IATA Analyst Viewpoint for Oct-2011 sourcing Airbus, Boeing, Bombardier and Embraer
* Assumes 496 orders for the Boeing 737Max are confirmed in 2011. Boeing in Nov-2011 stated it has received 600 737Max
commitments from eight customers but no firm orders.

This flurry of orders has in itself created a new challenge, intensified by the current economic concerns in the euro zone. Based on BOC Aviation’s estimate, the value of annual commercial aircraft deliveries that BOC Aviation is interested in is due to increase 47% from 2010 to 2013 – or USD30 billion in additional annual capital expenditure (CAPEX) over the three-year period. 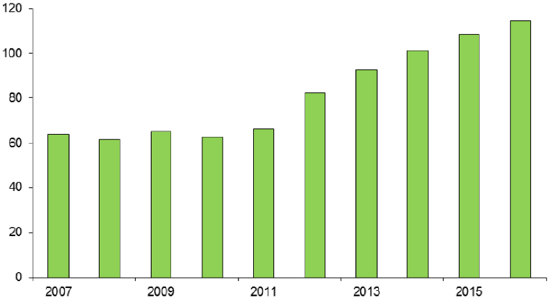 Overall, Asia Pacific airlines carried a record 190 million international passengers in 2011, a 3.5% year-on-year increase (the slowest pace of growth over the past three years), with the region’s sustained economic growth supporting both business and leisure travel demand. International passenger traffic (RPKs) increased 3.7%, outpaced by what AAPA labelled as a “relatively optimistic” capacity (ASKs) growth of 6.3%. 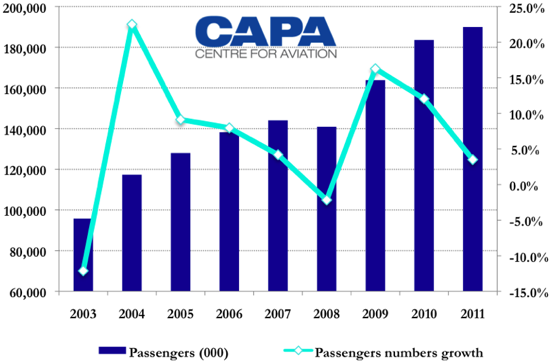 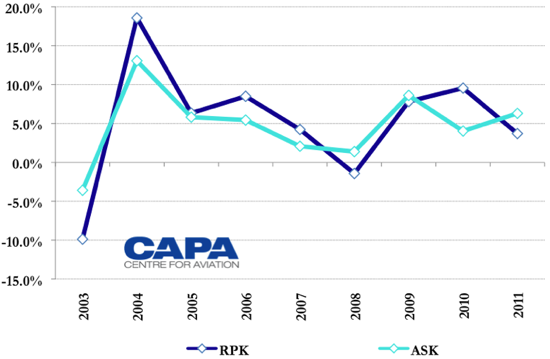 This resulted in a 2.0 ppt decline in average international passenger load factor to 76.4%.

And when “relatively optimistic” capacity growth meets a negative freight indicator, there could be problems 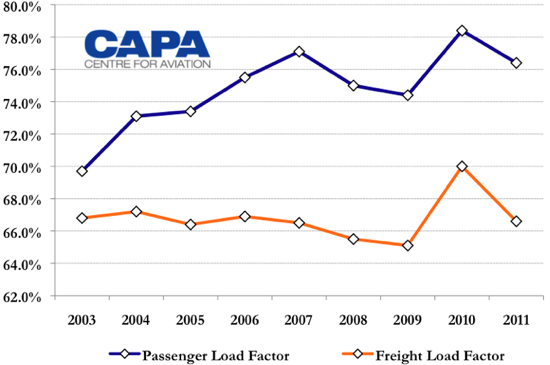 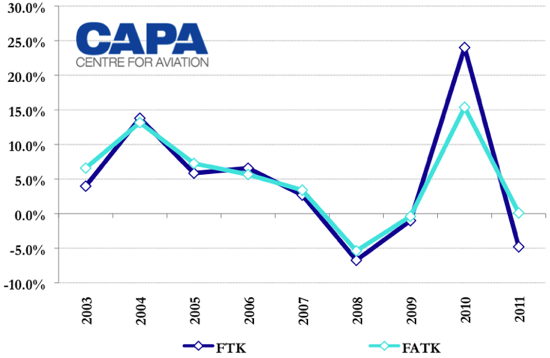 AAPA reports pax growth in all but one month of 2011

AAPA members handled 16.6 million international passengers in Dec-2011, a 4.0% year-on-year increase. Passenger numbers increased in all but one month (Mar-2011) of 2011 and in every month of 2010 as the region's carriers continued to see growth in demand for both business and leisure travel.

This continued what is now a feature of international capacity growth at Asia Pacific airlines, consistently exceeding traffic growth for the past 13 months. As a result, load factors have also declined over this period (Dec-2010 through Dec-2011) after 16 consecutive months of year-on-year gains between Aug-2009 and Nov-2010. 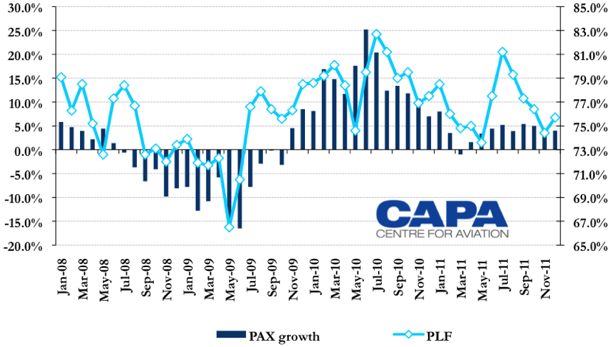 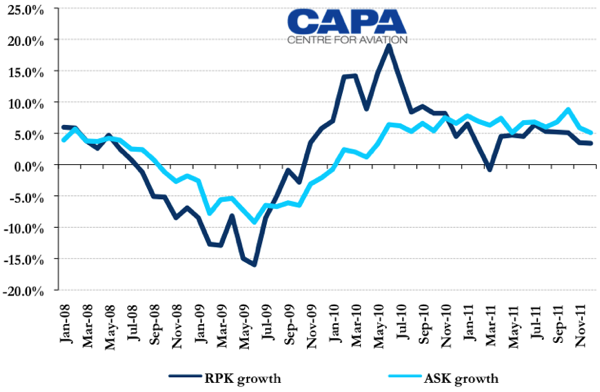 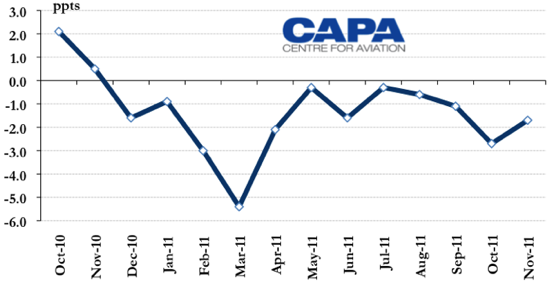 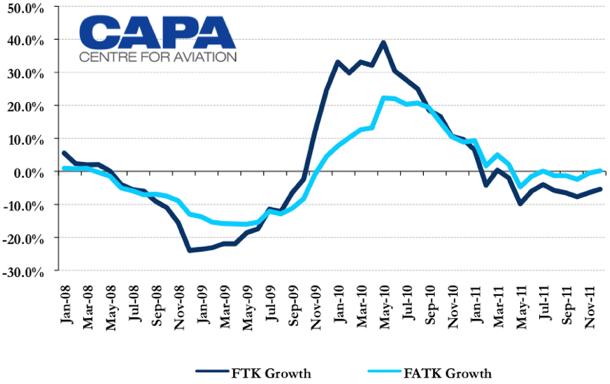 Challenges ahead and continued uncertainty for Asia's airlines

The aviation industry continues to have a cautious outlook for 2012 amid continued reductions in business and consumer confidence and current economic uncertainty and weak trade conditions, which are all likely to weaken air travel and air freight further. It is not all gloom, as some sparks of recovery may be occurring in the important US economy, but the lingering political indecision within the Eurozone is having its effect on business confidence worldwide.

Meanwhile, continued increases in aviation taxes and stubbornly high fuel prices are added concerns for the industry and barriers to profitability in an industry already pressured by weak margins.

The influx of new aircraft and capacity now make it unlikely that airlines can maintain recent yield levels and load factors, which had aided in a recovery in profitability following the 2008/09 economic downturn. Optimism may be the medium term outlook for market growth in the Asia Pacific region, but the oversupply of seats in the short term promise to make profits much more elusive in 2012.