Argentina’s current president Mauricio Macri has followed through on pledges to liberalise the country’s aviation market and the result has been a 32% jump in passenger growth from 2015 to 2018.

The more liberal approach, coupled with Argentina’s low trips per capita, has attracted a flock of new low cost airlines hoping to cash in on the opportunity in the country to stimulate traffic. Three low cost airlines are now based in Argentina – Flybondi, Norwegian Air Argentina and JetSMART Argentina.

Mr Macri is presiding over economic turmoil ahead of an election in Oct-2019. Speculation is growing that Argentina’s former President Cristina Fernández de Kirchner could challenge Mr Macri, and if her team were to win the election, her Peronist policies will likely become vastly different from those of her predecessor.

Prior to Mr Macri taking office in 2015, Argentina was largely closed off to airline competition and its flag carrier Aerolineas Argentinas enjoyed a solid wall of protection from Ms Kirchner’s government (and previous governments).

Mr Macri allowed airlines to expand domestically and international operators to serve Argentina’s secondary market. Aspiring LCCs also received a break when the government lifted the long-standing fare floor in Argentina during the summer of 2018.

Flybondi was the first fully fledged LCC to debut in Argentina when it launched operations in Jul-2018.

The airline operates a fleet of five Boeing 737-800s on 13 domestic routes and one international route to Asunción in Paraguay (according to CAPA and OAG). Data from the Argentinian government show that Flybondi transported approximately 865,000 passengers from its debut to YE2018 and achieved a 6% share of the domestic market during that period. It marked one million passengers carried in Feb-2019.

JetSMART Argentina made its debut in Apr-2019 and operates three A320s on six domestic routes and one international route to Santiago, Chile. JetSMART Argentina is a subsidiary of JetSMART Chile, which ushered in the ULCC model in Chile during 2017. 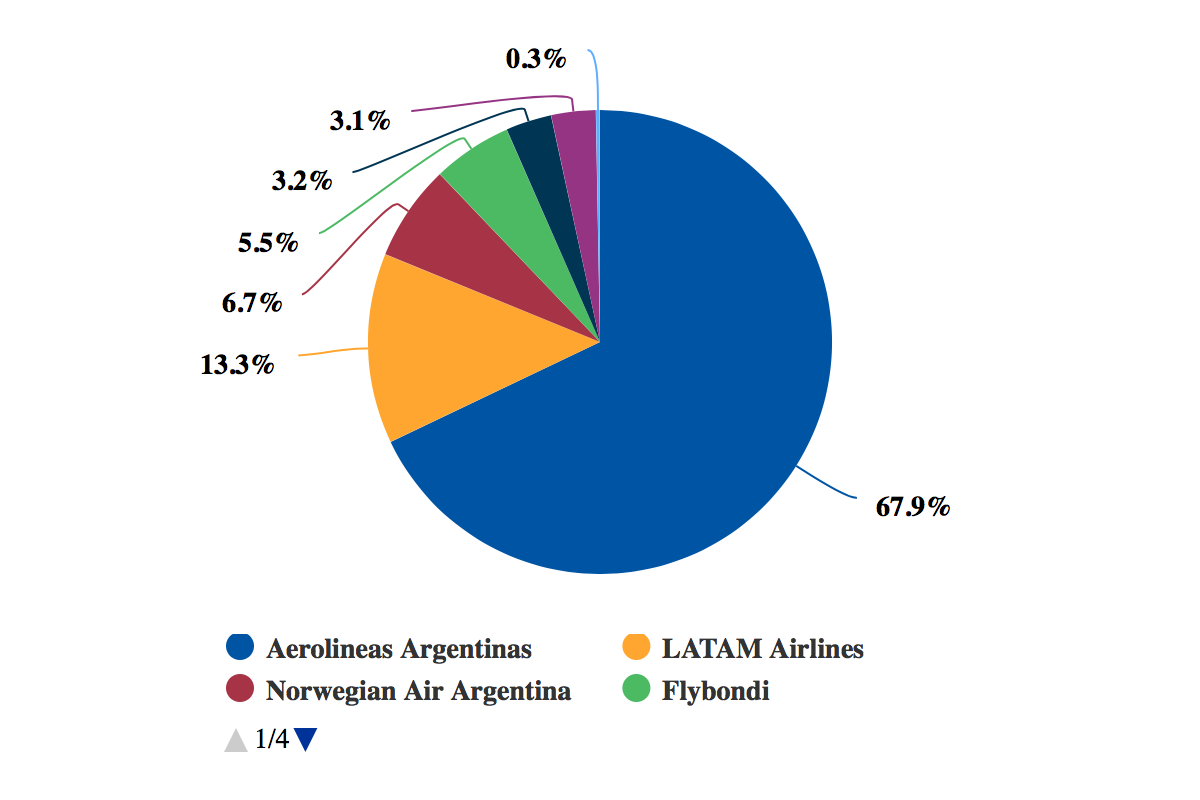 The country has been battling with currency devaluation that makes international travel unaffordable for many travellers.

Government data show that international passenger levels fell year-on-year from Jun-2018 to Dec-2018, falling as much as 7% both in Oct-2018 and Nov-2018. Domestic passenger levels grew steadily in 2018, but there is little doubt that Argentina’s airlines battled weak yields. 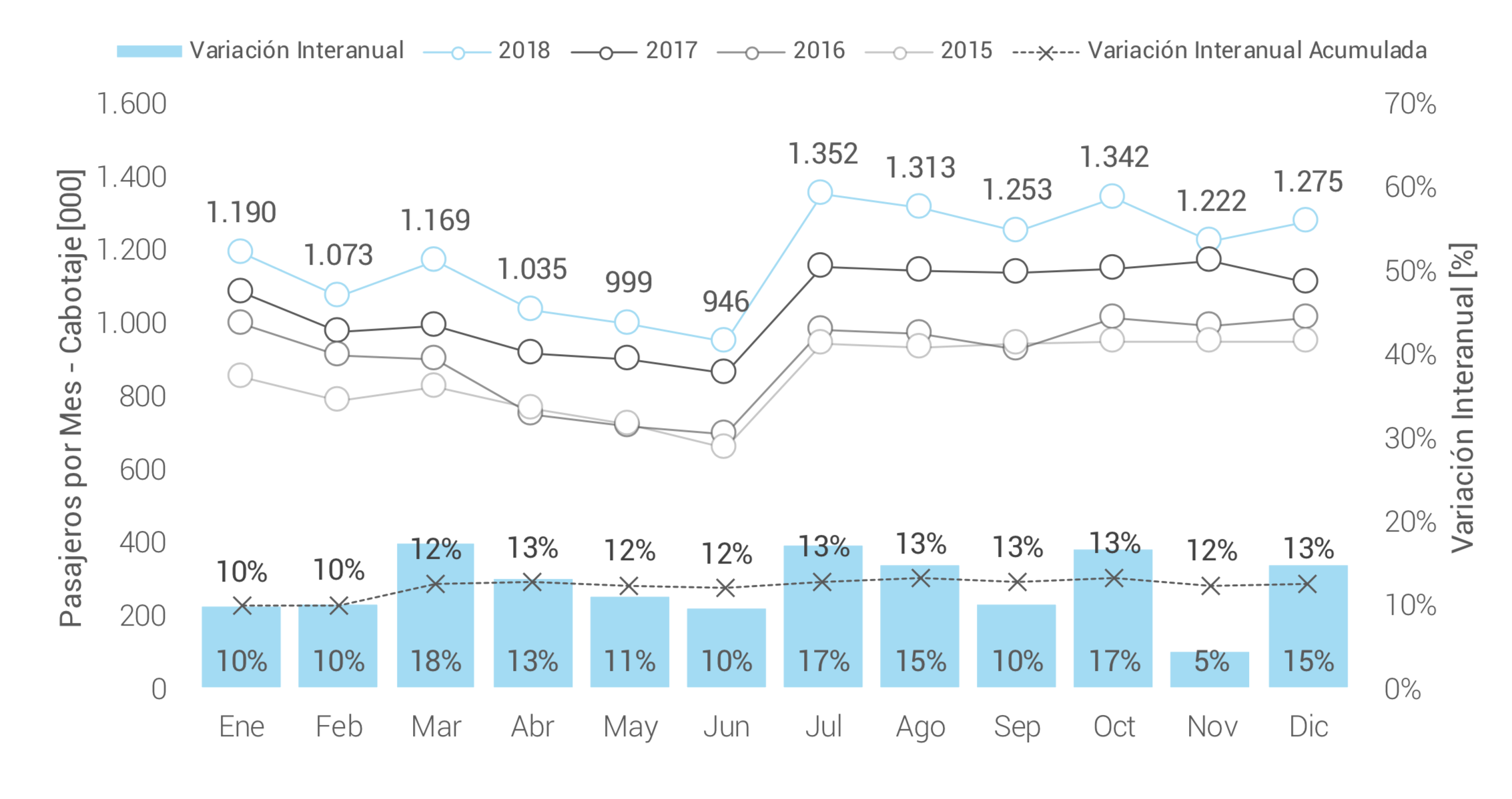 There is not enough operating data available to draw conclusions about the performance of Argentina’s low cost start-ups, but Flybondi named a new CEO in early 2019 and Norwegian Air Argentina has sent mixed messages to the market, reportedly threatening to withdraw while also outlining plans to expand within Argentina in Sep-2019.

Argentina has a population of close to 45 million residents, and there were 0.3 trips per capita in 2017.

Similarly to Mexico, in Argentina there is an opportunity to convert bus passengers to air travel in Argentina. But Argentina likely cannot support three low cost airlines and two traditional carriers at this stage in its development. Although the low cost model in the country remains in its early stages, at some point consolidation will occur in Argentina’s low cost sector.

There could be a new administration: a risk to liberal policies

Copa Airlines has said that it is planning flat capacity growth on its international routes in Argentina in 2019.

Argentina’s tough economic conditions are also putting Mr Macri’s future in doubt. The country is holding elections in Oct-2019 and his approval rating have fallen, particularly after the securing of loans from the International Monetary Fund (IMF) and his institution of unpopular austerity measures.

Populist former President  Ms Kirchner (actually running as Vice President, under what would surely be only a nominal President, former cabinet chief Alberto Fernandez) is in the midst of a corruption scandal, but it appears she could have momentum if she runs against Mr Macri.

It is too early to determine the outcome of Argentina’s election and there are other candidates voicing their plans to run for president, but it is probably a safe bet that if Mr Macri loses the election many of his policies and initiatives will be rolled back – including his more liberalised aviation policy.

There has never been any discussion about privatising Aerolineas Argentinas during Mr Macri’s tenure, but the airline has been forced to compete more evenly in both the international and domestic markets. That could also change under a new administration.

Argentina's upcoming election could be a wildcard for its aviation sector

In many ways, Argentina is a study in contrast. There’s a huge opportunity to stimulate air traffic in the country, but persistent economic turmoil makes it difficult to predict the long term success of the low cost model in the country.

The upcoming presidential election in Argentina is a major wildcard for the country’s aviation sector, and although the start-ups will continue to persevere, the operating environment could significantly change.