An eventually successful A380, but no new orders this year? – Suppliers Share Wrap

EADS CEO, Louis Gallois, thinks the A380 will eventually be a successful product, but the executive does not expect significant orders for the company’s troubled aircraft until 2011 or 2012.

With just 202 orders, two years of design/testing delays and three years of production problems, the A380 has been a massive money pit for Airbus. The manufacturer has delivered just 26 of the aircraft since 2007, with the 27th due to be delivered to Lufthansa later this month.

Lufthansa Fleet Manager, Nico Buchholz, stated it has no immediate plans to purchase additional A380s, in an interview with Bloomberg. The carrier has 15 A380s on order, and will deploy the aircraft on Frankfurt-Tokyo service from 11-Jun-2010. Lufthansa also plans to operate A380s to Beijing and Johannesburg.

EADS shares were down 4.2% on Friday, as European markets continued their slide at the end of the week. 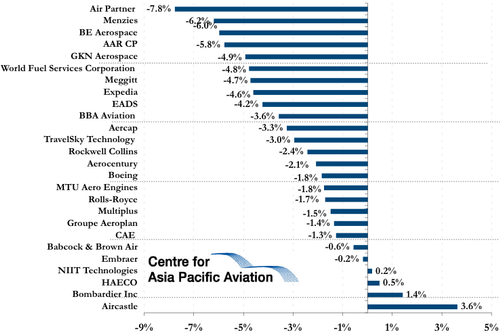