American and Continental raise fuel surcharges; Conference Board states economy on the mend

The AMEX Airline Index dropped (-1.9%) on Thursday (19-Nov-2009), as the majority of North and South American carriers witnessed a fall in stock prices, despite a 2.7% reduction in oil prices, to USD77.46. The wider market was also weaker, with the Dow ending trading down 0.9%.

Slow growth ahead, according to Conference Board

Stocks dropped despite the Conference Board reporting a seventh consecutive monthly increase in the Leading Economic Index (LEI) in Oct-2009, up 0.3%, following a 1.0% gain in Sep-2009, and a 0.4% rise in Aug-2009. This suggests that an economic recovery is finally setting in, with the US economy likely to experience slow growth through 1H2010. However, the Board cautioned that the pace of growth will depend on when and by how much demand picks up.

The Organisation for Economic Co-operation and Development (OECD), meanwhile, warned that the economic recovery now gradually developing across OECD countries remains "too timid" to halt the continuing rise in unemployment.

The report described the recovery as tepid, as economic activity is being held back by households and businesses repairing their finances and reducing their debts. With a subdued recovery and substantial spare capacity, inflation is projected to continue to fall well into 2010, according to OECD.

US covering with the help of government stimulus measures: OECD

According to the OECD, the US is recovering with the help of government stimulus measures, a rebound in world trade underpinned by increasing demand from large emerging-market economies, stockbuilding by businesses and stabilisation of the housing market. US Gross Domestic Product (GDP) is expected to grow by 2.5% in 2010 and a further 2.8% in 2011, while the jobless rate is expected to peak in 1H2010 in the US. 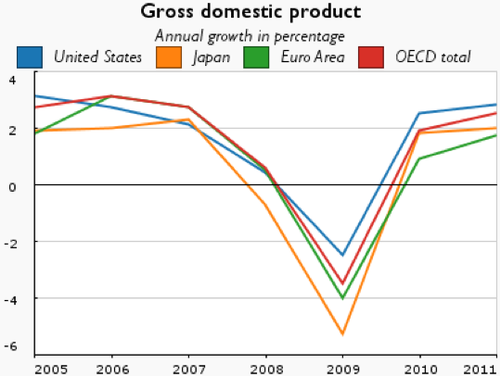 Contractions in Canada appear to have been halted: OECD

According to OECD, the contraction that began in 4Q2008 seems to have ended in 2H2009. External demand and domestic investment now appear to be rebounding, but they also pose the greatest risks to the recovery’s sustainability. Unemployment is projected to keep rising until the end of 2009 and underlying disinflation is expected to continue for several more quarters under the weight of "persistent slack".

The organisation suggested expansionary measures, including extending the window of eligibility for extraordinary unemployment benefits, should be resisted, given the time required to roll out fiscal stimulus and the nascent recovery. Instead, governments should be preparing "detailed and credible" medium-term fiscal consolidation plans to be announced soon and be implemented when the recovery is firmly underway.

Meanwhile in Brazil, GDP grew in 2Q2009, following a decline in the previous two quarters. Activity rebounded robustly on the back of resilient private consumption and an ongoing recovery in industrial  production, which had contracted sharply in the previous months, according to OECD.

The OECD added that capacity utilisation is approaching pre-crisis levels in a number of manufacturing sectors, although investment is yet to recover. Domestic demand is set to grow vigorously in 4Q2009 and into 2010, supported by a "still accommodative policy mix".

Air Canada's shares dropped yesterday (-7.2%) despite Statistics Canada announcing that the country’s composite leading index increased 0.7% in Oct-2009, its fourth straight advance. In Oct-2009, 8 of the 10 components expanded, the same as in Sep-2009, with housing remaining the fastest-growing component. While the US leading indicator continued to recover, this has been slow to translate into higher demand for factories in Canada.

In other Canadian news, WestJet (-0.4%) announced plans to push the launch of its new loyalty programme back to 2010 following issues with the integration of its new reservation system in Oct-2009. The carrier had planned to launch the programme by late Nov-2009 or early Dec-2009.

American Airlines (-3.8%) and Continental Airlines (-3.0%) have reportedly followed the generally trend and raised fare surcharges over peak travel periods. Both plan to charges USD30 for flights during peak days in Mar-2010 and Apr-2010.

American Airlines meanwhile stated preparations for an investment in Japan Airlines are at an advanced stage, with the carrier again warning of the “enormous risks” JAL will face in switching to SkyTeam. American Airlines Vice President of Asia and the Pacific stated “there is very minimal risk in staying with oneworld as opposed to joining the SkyTeam”. 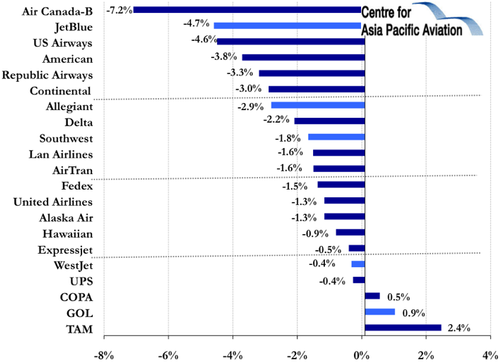