American Airlines joined its US network airline peers in recording strong financial results during 2Q2014, and similar to Delta and United, saw particular strength in the US domestic market.

Also similar to Delta and United, American has concluded that there is some excess capacity on the trans-Atlantic markets, and has joined its peers in refining its capacity targets in that region for the remainder of 2014.

American in particular is bracing for headwinds from a reduction in service to Venezuela in 3Q2014, which will ultimately result in unit revenue performance below Delta and United. That pressure is continuing through 4Q2014.

Despite some geographical pockets of concern, American overall has a positive view of the demand environment, and is also joining its fellow network airlines in defining new shareholder rewards.

On a GAAP basis, American recorded a profit of USD864 million in 2Q2014 compared with USD801 million for Delta Air Lines and USD789 million at United.

As has been the case during the past couple of quarters, American believes it is more prudent to benchmark the combined results of American and US Airways on a non-GAAP basis, and uses those results as the basis of earnings discussions.

Together American and US Airways, which merged in Dec-2013, recorded a 10% increase in operating revenues to USD10.3 billion. Operating expenses increased 7% to USD9.3 billion, and operating income jumped 41% to USD991 million. 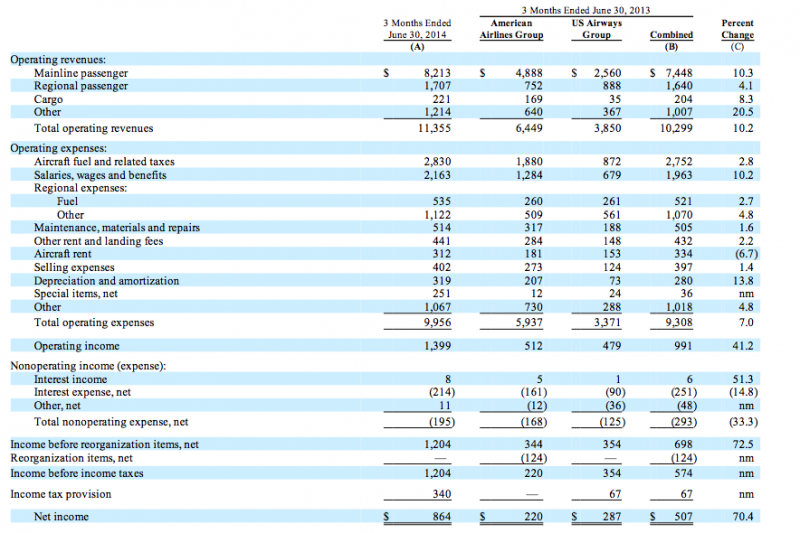 American records its strongest revenue gains in the US domestic market

On a unit basis American increased is passenger unit revenues by 6% on 6.5% yield growth.

American posted the strongest results in its US domestic entity, which recorded an 8% increase in unit revenues year-on-year during 2Q2014. Domestic unit revenues on a combined basis were up nearly 10% during the quarter, driven by 9% yield growth. American president Scott Kirby highlighted the strength of combining legacy American’s transcontinental flying from New York with legacy US Airways shuttle product operated along the US east coast. 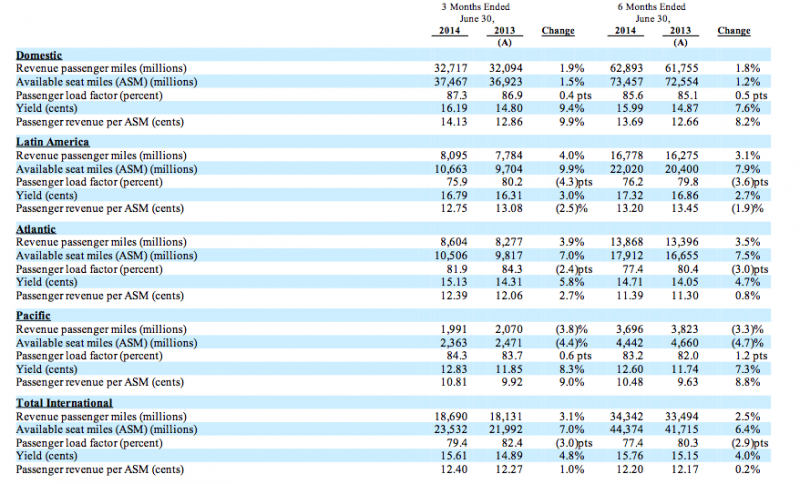 American’s overall passenger unit revenue growth in the trans-Atlantic was 2.7% on a 5.8% rise in yields. Its capacity in those markets grew by 7% year-on-year. Mr Kirby observed that American felt quite good about the results given the overall industry capacity increases on the trans-Atlantic, and the headwinds generated by legacy US Airways switching from Star to the oneworld alliance.

Mr Kirby concluded American would record a modest decline in trans-Atlantic passenger unit revenues in 3Q2014, explaining that while demand in those markets remained strong, it was not robust enough to absorb the nearly 10% industry capacity increase. Previously American has indicated that while capacity was indeed growing in the trans-Atlantic, demand was growing as well.

Now American is making similar moves to Delta and United and plans to reduce its planned trans-Atlantic capacity by 3% for the remainder of 2014. Initially the airline had planned 5% growth, and with the changes that falls to 2%.

American recorded a favourable performance in is Pacific markets during 2Q2014 as unit revenues increased 9% on an 8% rise in yields.

Mr Kirby explained that in the face of significant capacity growth in the Pacific markets (including American’s contribution), American was benefitting from actions it has taken to close the historically larger gap Delta and United have had in service to Asia. As a result American was experiencing an “outsized” performance in those markets.

During 2Q2014 American inaugurated service from its Dallas/Fort Worth hub to Hong Kong and Shanghai.

American has recently warned that its 2Q2014 results in Latin America would be weakened by a fall off in corporate demand during the FIFA World Cup soccer tournament held in Brazil in Jun-2014 and Jul-2014. Delta has made similar conclusions.

But American is the largest US airline from the US to Latin America, holding a 32% seat share for the week of 21-Jul-2014 compared with an approximate 11% each for Delta and United.

American’s passenger unit revenues in its Latin American markets fell by 2.5% in 2Q2014. Yields increased 3% as capacity grew by nearly 10%. Mr Kirby remarked that in addition to the fall off in corporate demand, some travellers that would normally opt to vacation in the US opted to remain in Latin America for the World Cup.

The airline also believes there is some oversupply in Latin America, and plans to cut its capacity in the region by 5% for the remainder of 2014, which will result in flat capacity growth.

American also is experiencing pressure from cutbacks in Venezuela. Starting in Jul-2014 it decreased its weekly flights from the US to Venezuela from 48 to 10 as it had VEF791 million tied up in un-repatriated funds.

Mr Kirby explained that in Jun-2013 when Venezuela’s exchange rate starting spiking, American’s revenues began to jump significantly. During 3Q2013 Venezuela represented only a half point of American’s total system capacity, but roughly 2% of combined consolidated revenues. In 3Q2014 American is losing most of that revenue and a half percent of capacity. The result is a negative 1.5% effect on American’s system passenger unit revenues in 3Q2014.

American forecast that its passenger unit revenues in 3Q2014 will increase 1% to 3%, and excluding the effects from Venezuela, it estimates a 2% to 4% rise, which is in line with projections supplied by Delta and United. Mr Kirby indicated that the revenue pressure stemming from the situation in Venezuela would also linger into 4Q2014.

Queried about other Latin American markets Mr Kirby conceded that Argentina is suffering from some macroeconomic weakness, but the rest of South America is “pretty strong”.

The Caribbean and Mexico on a revenue basis are both quite strong, he said. But there are specific markets where American is seeing huge capacity growth. He estimated industry supply in Cancun and Montego Bay is up 25% year-on-year.

American believes its unit costs should level off in 2015

For FY2014 American projects mainline unit costs excluding fuel and special items to grow by 2% to 4% in FY2014 driven by higher labour costs. Its unit costs in the regional business are expected to grow 3% to 5% in FY2014.

American is assuring that its mainline unit costs will fall in the negative 1% to plus 1% in FY2014, which the airline stated is in line with inflation.

American plans to pay a USD10 cent dividend to shareholders in Aug-2014 and a USD1 billion share repurchase programme set for completion by YE2015.

It is the first dividend American has paid out since 1980, and its swift movement in creating shareholder value roughly six months after the merger closed reflects the appetite investors have for some return on their investment.

American will continue to feel some revenue pressure into 4Q2014 from its service reductions and revenue decreases in Venezuela; but absent the headwinds created by the frozen funds American for now is holding its own against rivals Delta and United.

As CAPA has previously concluded, the real test of a relatively smooth merger integration comes in 2015 when it obtains a single operating certificate, completes difficult system cutovers and starts cross-fleeting in earnest. In some respects American is still in the honeymoon phase of its merger. But hopefully the merger experience of its top executives has given them a vault of wisdom to deal with the inevitable challenges that arise once the honeymoon is over.