American Airlines' 07-May-2015 launch of daily Dallas-Beijing services gives Dallas/Fort Worth airport, in the space of a year, its trifecta of Greater China destinations: Beijing, Hong Kong and Shanghai. Dallas becomes the 10th North American airport to offer flights to the three cities. Four airports – Los Angeles, New York JFK, San Francisco and Vancouver – have services to additional cities; San Francisco has the most with six greater China destinations.

The Dallas-Beijing service also cements a turning point for American Airlines' Asia network, which in 2015 will be larger in mainland China than Japan, the historical Asian focus for US airlines. American in 2015 will have 22% more seats to mainland China than Japan. United also will now have an 11% larger network in China than it has in Japan in 2015. Delta remains anchored on Japan, with twice as many non-stops seats there as to China, although the gap has been narrowing.

In the space of a year, Dallas has gained three greater China services, all from American Airlines as it builds up its Asian presence from Dallas, its mega hub. Beijing, Hong Kong and Shanghai join previously existing Asian services to Seoul and Tokyo Narita.

Dallas/Ft Worth Airport CEO Sean Donohue spoke to CAPA TV about DFW's recent international transformation. In addition to the growth in Asian services, DFW has all three Gulf network carriers. DFW is now talking to American and European airlines about increasing flights to Europe; DFW sees service to only five European points.

Two China-North America routes have been announced for 2015 but not yet scheduled. These are Air China's Beijing-Montreal and Hainan's Changsha-Los Angeles. If the Hainan route is offered, Los Angeles will have as many Chinese destinations as San Francisco.

North American airports with service to greater China: 2015, schedules filed as of 08-May-2015

American has technically been larger in mainland China than Japan since Jun-2014 when it launched Dallas-Shanghai Pudong service. That was American's fourth flight into mainland China, with all flights offered daily. American also had four flights into Japan, but one – Chicago-Tokyo Narita – was reduced from daily to five weekly in late 2013.

It has mostly remained at five daily since, but the chance of daily restoration meant the two countries were similar in size. (Tokyo Narita-Chicago will be American's third international 787 route. The reduced frequency perhaps indicates the route needs greater efficiency, which the 787 brings.)

The new Dallas-Beijing service cements China's lead. This comes after American commenced services to China in only 2006. Although American has more seats to China than Japan in 2015, its reductions in past years in Japan means American's China network is still some way from being larger than its historical peak size in Japan. 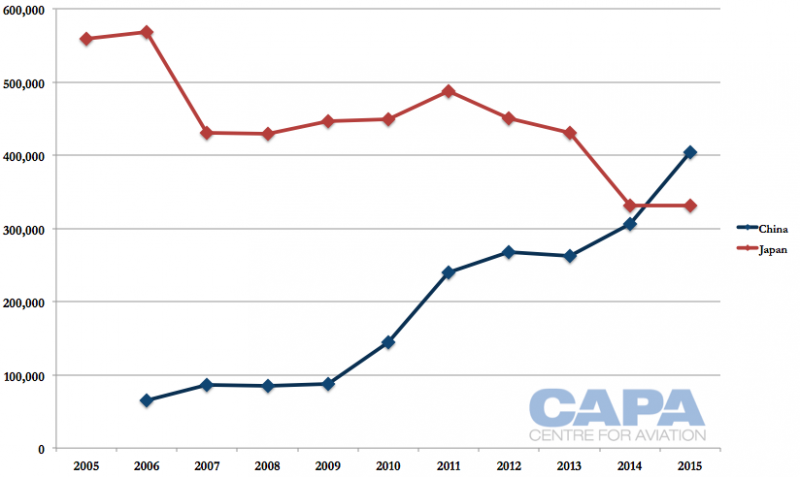 Growth opportunities in Japan are limited, compared to China

The opportunity for growth in China needs no explanation, although there are questions of tension as Chinese carriers overtake US airlines. A few years ago, the growth concern for US carriers was not having enough traffic rights, as Chinese airlines were given time to grow into the available capacity limits. They are now reaching that and the US airlines' concern is having strong competitors which will in the future be even more formidable as they make much overdue restructurings to become more efficient.

Upcoming daytime Haneda slot allocations for US carriers will lead to another round of bidding. A Miami-Tokyo Narita service has been mooted, which could lead to growth from its current position. However, Japan Airlines in 2014 said it was considering taking over one of American's two daily Tokyo Narita-Dallas Ft Worth flights. That would mean

little change at the AA/JAL JV, but would mean a decrease for American's flying.

American and United are now larger in China than Japan

2015 marks the first year American and United will be larger in Japan than China for non-stop services from the mainland US. United in 2014 had 8% more seats to Japan than China, but its Chengdu route (launched mid-way through 2014) and additional Shanghai service will mean United has 11% more seats to China than Japan in 2015, according to OAG data.

American is also turning the corner in 2015: it had 8% more seats to Japan than China in 2014 but in 2015 will have 22% more seats to China than Japan. Although American will have a larger proportion of its capacity into China than United, United is more than twice as big in China as American. 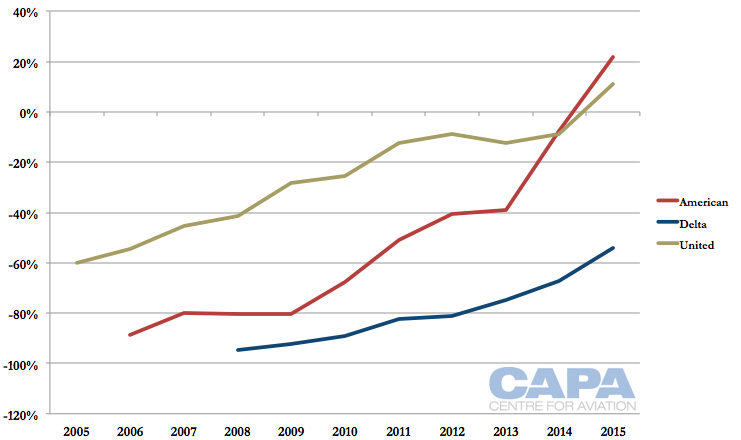 Source: CAPA - Centre for Aviation and OAG
Note: Mainland USA only. Continental included with United and Northwest included with Delta.

Delta is still anchored on Japan and specifically its Tokyo Narita hub. It will have 54% more seats into Japan than to China in 2015, down from 95% in 2008 (when non-stop China service commenced; previously China was accessed via Tokyo). Delta will continue to narrow the gap as it grows in China and looks to reduce its Tokyo hub, partially by down-gauging aircraft. Delta hopes to establish a hub in Shanghai, but this is a long-term vision.

As China takes on increased importance for the US carriers, and for American and United China becomes larger in seat volume than Japan, the strategic Asian anchoring of US carriers remains in Japan. It is there that American and United have joint ventures (with JAL and ANA respectively), while Delta has a large hub, inherited from its Northwest Airlines history.

The US-Japan JVs can include accessing other Asian countries, but China has not authorised them and may not do for a while.

The times are changing, but although American and United may now be larger in China than Japan, the transition has only started. It will be some more time before they have the strategic strength in China that they possess in Japan.

And much of that will ultimately depend on the alliances that they are able to develop. In Pacific markets the US airlines are unlikely to be able to assert the sort of dominance they have domestically or on the North Atlantic, so partnerships will be critical.