The majority of North and South American carriers were down at the end of trading on Wednesday (03-Feb-2010), dragged lower by the wider market. The Dow (-0.3%) fell on weaker than expected service sector activity. A rise in oil prices (+0.3%), to USD76.98, also affected shares.

The small gain in traffic is of concern considering the US was in the worst stages of the global financial crisis at the start of 2009.

The carrier estimated a 2.0% increase in passenger revenue per ASM (RASM) for the month, while total RASM was up approximately 3.0% off last year's very weak base.

WestJet (+0.4%) meanwhile was one of the few carriers to see stock gains on Monday, after it reported a sixth consecutive year of record January load factors in Jan-2010, with load factors gaining 2.0 ppts to 78.8% in Jan-2010.

IATA released its Airlines Financial Monitor for Dec-2009 and Jan-2010 during trading. According to the report, 11 North American carriers reported a combined net profit of USD41.5 million in 4Q2009, compared to a loss of USD352.2 million in 4Q2008, indicating an improvement in performance, as the economy improves. The one Latin American carrier to report so far also indicated improvements. 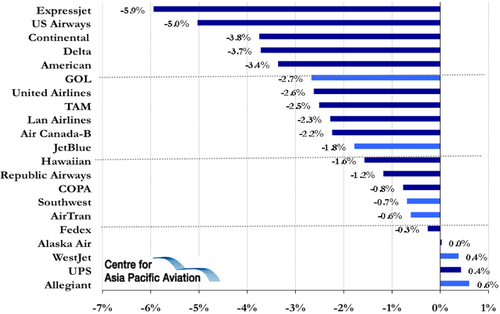