As speculation over the choice of Amazon’s second headquarters held a major place in business headlines in 2018, Amazon continued to build up its air delivery operations through expanding its presence at various US airports and enlarging its fleet.

Its good news for airports such as Fort Worth Alliance, Cincinnati and Rockford where Amazon plans to expand its presence, and for Air Transport Services Group, which is deepening its ties with the online retail giant.

Since Amazon began operating its own delivery streams questions have grown about whether Amazon would affect the businesses of the cargo giants FedEx and UPS.

Amazon’s ultimate impact on the market remains to be seen, given that it is in the early stages of building up its air operations. But recent developments show Amazon’s ambitions in cargo delivery appear to be growing.

Amazon Air quickly builds up a fleet of 40 aircraft

Amazon launched a cargo delivery service in 2016, and presently operates 40 aircraft as Amazon Air. The cargo jets are leased from Air Transport Serviced Group (ATSG) and Atlas Air, and those companies operate the aircraft as well.

Additionally, Amazon was issued warrants by ATSG to expand a potential ownership stake in the cargo operator. In 2016 Amazon gained warrants to purchase a 19.9% stake in ATSG that expire in 2022.

Under the latest deal, Amazon could incrementally increase its warrants rights in ATSG for a potential equity stake in ATSG, rising from 33.2% to 39.9%. That increase is tied to future aircraft leases if Amazon opts to lease an additional 17 aircraft from ATSG.

Atlas Air also issued warrants to Amazon in 2016 to purchase up to 20% of Atlas over a period of five years.

It remains to be seen whether Amazon will exercise any of those warrants, but having those warrants in its coffers shows Amazon appears to be working towards long term relationships with its air service providers.

Amazon’s goal with the establishment of Amazon Air was to have more control of its delivery streams and – presumably – to cut costs. A widely circulated report by Morgan Stanley calculated that Amazon could save USD1 billion to USD2 billion in 2019 by handling more of its own deliveries, which is approximately 3% to 6% of its global shipping costs, according to CNN.

The company is showing its long term commitment to growing its own delivery streams by expanding its presence at various airports. It is developing a regional hub at Fort Worth Alliance airport, expanding its presence at Chicago’s Rockford airport, and is developing a USD1.4 billion hub at the Cincinnati Northern Kentucky International airport that will eventually support 100 aircraft.

During 2019 Amazon is also opening a new package sorting facility at Wilmington Air Park near Cincinnati, and will also operate flights from the facility.

It is a sizeable commitment from Amazon just two years after entering into the delivery business, and it shows Amazon has moved beyond the experimental phase of package delivery.

The question is, what are Amazon’s ultimate ambitions? Will it continue to focus on logistics and delivery for its customers, or should FedEx and UPS be concerned about Amazon becoming a formidable competitor over the long term?

There are varying opinions about Amazon’s ultimate effects of the cargo and logistics business. The Morgan Stanley report cited by CNN and other news outlets calculated that Amazon Air represented approximately 2% of lost revenue for UPS and FedEx in 2018, and that could grow to at least 10% by 2025 (according to CNBC).

In late 2017 a report in Forbes highlighted that while e-commerce is a big part of FedEx’s and UPS’ business, those companies have stressed that their growth is not dependent on one particular e-commerce company. The report highlighted that FedEx had stated that only 3% of its revenues were derived from Amazon, whereas an estimated 7% of UPS’ revenues come from Amazon.

Additionally, even if Amazon does eventually build its fleet to more than 100 aircraft, that fleet will remain a fraction of the size of the fleets at FedEx and UPS. CAPA’s fleet database shows FedEx has a fleet of 570 operating aircraft. 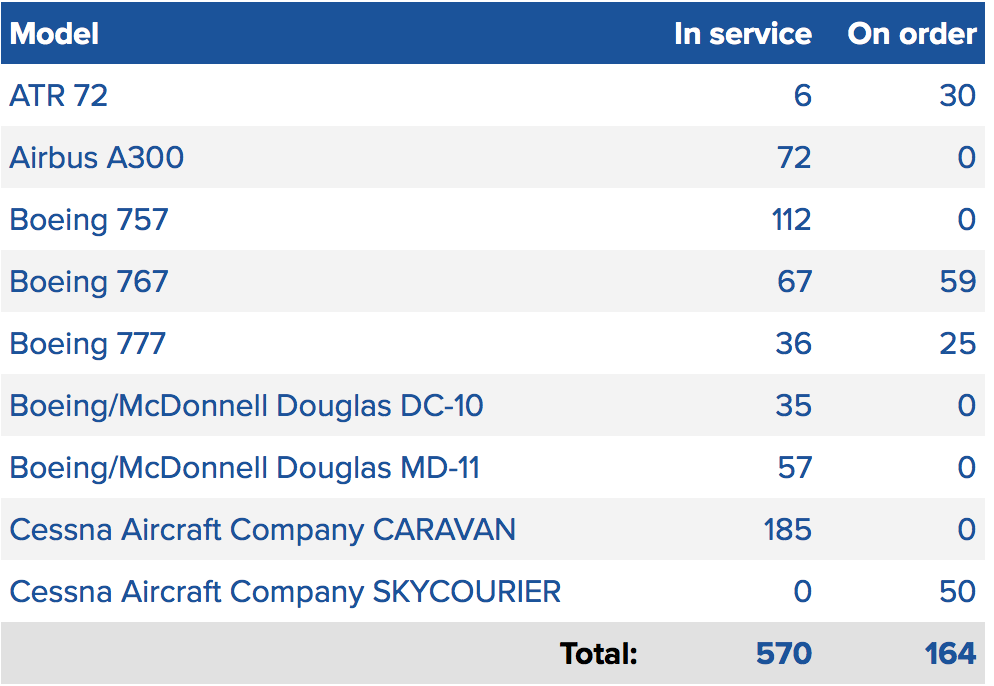 Amazon is in the early stages of building out a delivery and logistic platform, but as a technology company it brings a different perspective to the business. The company highlights its 185 fulfilment centres, where it uses algorithms, robotics, machine learning and other technologies to increase delivery speeds for its customers.

“Amazon is now bringing the same technological expertise to efforts in the transportation space to increase shipping capacity for customers”, the company has stated.

That is obviously PR speak, but it also signals that Amazon has a raft of technologies already in use to bring a fresh look at the air cargo and logistics businesses, and if it finds opportunities to leverage those technologies to bolster its overall revenue, it will grow that area of its company beyond servicing existing customers.

Amazon is a worldwide phenomenon that shows signs of working to create new opportunities across numerous and varied business platforms.

Its strategy and approach to the cargo and logistics business will be closely watched in 2019 and beyond.