Allegiant Air reported a 6.7% year-on-year revenue increase to USD142.1 million in the three months ended 31-Mar-09 (1Q09), on the back of year-on-year improvements in load factors, ancillary revenues and average passengers per departure. A substantial reduction in costs, driven by a nearly 50% reduction in the per gallon cost of fuel, resulting in a near-tripling of the carrier’s operating margins and a record EPS for the company.

1Q09 also marked a return to capacity growth for the LCC, after a pullback at the end of 2009.

According to CFO and Managing Director Planning, Andrew C Levy, "we are very pleased with our first quarter financial performance. We held our own in a challenging revenue environment, more than offsetting fare weakness with increased load factors". He added, "at the right price we continue to find strong demand for our product. Should fuel prices remain at current levels, earnings and free cash flow will once again be exceptional".

Allegiant was the only US mainline carrier to have posted net profits in every quarter of 2008, with the consistently profitable LCC likely to be one of the best performing carriers in the current quarter and 2009 in general. These positive prospects for 2009, supported by the carrier's string of industry-leading financial and operating performances, contributed to the carrier's share price performance this year. 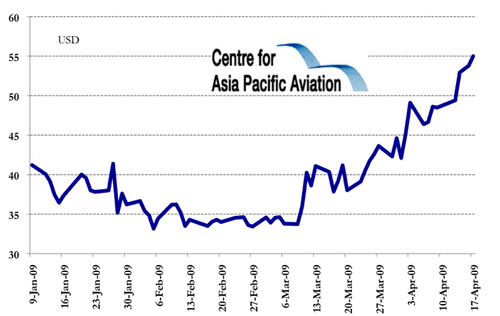 The sharp reduction in oil prices in the quarter has been particularly beneficial for Allegiant, which operates a fleet of older aircraft with an average age of 18 years. During the quarter, the carrier's operating expenses fell 17.8% year-on-year to USD97.6 million.

Meanwhile, operating profit improved, by a notable 209.6% year-on-year, resulting in a 20.5 ppt improvement in the carrier's operating margin to a record 31.3%, making it one of the world's most profitable carriers alongside Sharjah's AirArabia. Net profit was also up considerably, by 191.2% to USD28.2 million. 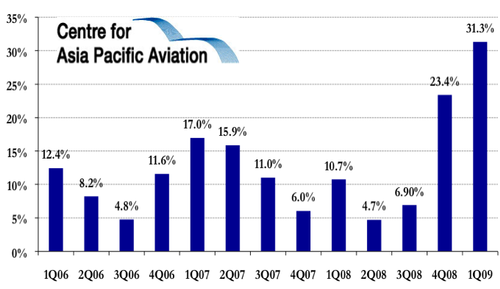 Ancillary revenues were, once again, a fantastic performer in 1Q09, surging 52.2% year-on-year, to represent 29.1% of total operating revenue (compared to 20.4% of total revenues in 1Q08). According to the LCC, prices for ancillary revenue items, such as hotels and rental cars, have remained "somewhat more resilient" than the base-selling airfare. These revenues are a key factor in the LCC's ability to maintain reasonable margins, even during last year's high-cost environment.

Allegiant ancillary revenue as a portion of total revenue:
1Q06 to 1Q09 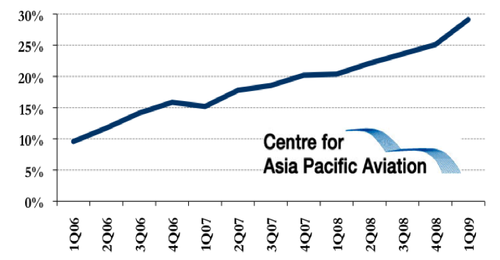 Average scheduled service fares fell 14.3% year-on-year in the quarter to USD74.52, partially offset by a 32.6% year-on-year increase in average ancillary revenue per fare. This resulted in an overall fare reduction of 3.6% in the quarter, to USD108.66, which slightly exceeded the carrier's expectations.

Seeing the benefits of a reduction in fuel costs

Allegiant's aircraft fuel expenses, meanwhile, fell 47.4% year-on-year in 1Q09, with an average fuel cost per gallon of USD1.47, a 49.0% year-on-year reduction. Allegiant, which remains unhedged, reported that fuel costs represented 34.2% of total expenses in 1Q09, the lowest proportion in over three years, compared to 53.5% in 1Q08.

Allegiant fuel cost as a portion of total operating expense: 1Q06 to 1Q09 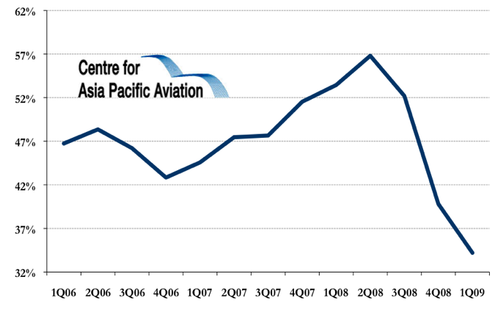 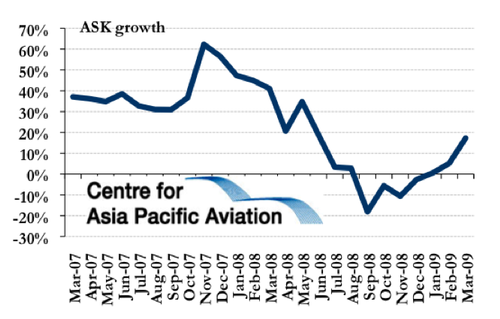 Allegiant's capacity (ASM) growth in the quarter was the strongest among the US carriers (although off a small base). Comparatively, the majority of LCCs, except Canada's WestJet, have slowed capacity growth to the 0-10% range, while all major US network carriers have been reducing capacity by around 10% or more. 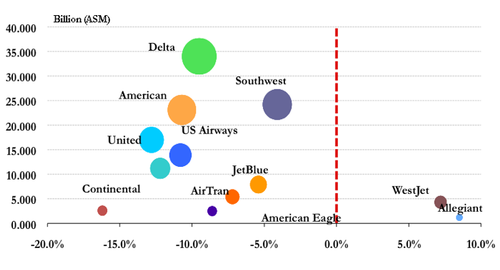 Allegiant's balance sheet and liquidity remains strong, with the LCC ending the quarter with USD236.4 million in unrestricted cash and short-term investments, a 61.6% year-on-year increase, and a 5.2% improvement from 4Q08 levels.

To continue to be "opportunistic" in purchasing aircraft for future growth

During 1Q09, Allegiant had USD11.5 million in capital expenditures for three aircraft (one already in service with the other two to enter service in the current quarter), three aircraft for part-out and miscellaneous other purchases.

Allegiant stated it expects to continue to be "opportunistic" in purchasing aircraft for future network growth and part-outs to support its spare engine and rotable parts inventory. The airline expects FY2009 capital expenditure of approximately USD25-30 million, an increase from the previously anticipated USD20-25 million (as at Dec-2008), for improvements to aircraft owned but not yet operated, purchase of additional spare engines and rotatable parts, and other miscellaneous capital expenditure.

Since the carrier's previous earnings announcements, Allegiant invested USD7.1 million in open market transactions to acquire 210,175 shares of its own common stock at an average of USD33.59/share under the share re-purchase programme, as approved in Jan-2009. Including open market transactions in both 2008 and 2009, Allegiant has repurchased a total of 763,875 shares at an average price of USD29.94.

Allegiant is continuing to diversify its operations, to improve the airline's risk profile.

During 1Q09, Allegiant launched service on four new scheduled routes, and announced service to a further 18 routes, to commence during 2Q09, including 13 routes to the carrier's new major leisure destination of Los Angeles, with services to commence on 01-Mar-09.

In other network highlights, the LCC commenced service to Punta Gorda (just North of Ft Myers) in the quarter and announced seasonal service starting at the end of Apr-2009 to Myrtle Beach. Subsequent to the end of the quarter, the LCC also announced new service from Eugene to the San Francisco Bay Area to start in Jun-2009 (for more route changes information, see separate Allegiant profile in this week's edition of Peanuts! Weekly).

Allegiant has also recently entered into fixed fee flying contracts with several different parties to provide charter service between Miami and four Cuban cities, in support of the Cuban family charter programme, with service to commence in Jun-2009. Allegiant will initially commit one aircraft to this programme, although it believes further expansion is possible. As with all fixed fee flying, Allegiant is not exposed to fuel risk under this programme.

The carrier also operated its first ad-hoc charters for the US Department of Defence (DoD) earlier this month, with the carrier stating the available DoD opportunities to date have "exceeded our expectations".

During 1Q09, Allegiant placed three owned aircraft back in service, two of which were previously leased to a third party. In addition, the carrier entered into operating leases for two MD-80 aircraft in the quarter, which the carrier expects to place in service by the end of 2Q09.

By the end of the 2009, Allegiant expects to place into service two additional owned aircraft, currently on lease to a third party. In addition, the LCC owns one other aircraft on lease to a third party, which is expected to be placed in service early in 2010. According to Allegiant, "the MD-80 market continues to favor us", allowing the carrier to "easily" purchase MD-80s without the need for financing, if needed.

By the end of 2Q09, Allegiant expects to operate 43 MD-80 aircraft, with this to increase to at least 45 aircraft by the end of 2009, which is two more than prior guidance.

Source: Centre for Asia Pacific Aviation & Allegiant
^ Does not include five owned MD-80 aircraft leased to a third party but not yet placed in service

Another key develop in 2009, and what Allegiant describes as perhaps the "most important event of the first quarter", was Allegiant's acquisition of key assets from its long-time IT provider, CMS Solutions.

Allegiant now has a permanent exclusive license for all CMS airline applications and has brought in-house all related development and programming, under the leadership of the carrier's new VP Information Systems, Rob Wilson, formerly of CMS.

Allegiant will benefit handsomely from the recent fuel reductions and expects 2Q09 costs to be substantially lower than the prior year, due to significantly lower fuel costs and increased utilisation. Fuel cost per passenger for the first half of Apr-2009 was slightly more than USD26, substantially below the USD62.48 in 2Q08. Increased utilisation is expected to drive non-fuel cost per passenger below the prior year's USD47.52 per passenger.

On the revenue side, the LCC stated it is seeing travelers continuing to book much closer to the time of travel, making projections difficult. However, given current "soft fare conditions", the carrier expects total scheduled RASM to decline year-on-year in the second quarter. The carrier also stated it expects it to be difficult to improve materially its 90.5% scheduled load factor in 2Q08.

Overall, Allegiant remains "confident" unit cost savings will "thoroughly overwhelm any unit revenue softness", resulting in another strong quarter in 2Q09 and beyond.

Unlike all its rivals, Allegiant appears to have found the right strategic mix to make money amid a harsh economic environment, characterised by extreme pressure on yield. Allegiant could replace Southwest as the standard bearer for an industry searching for answers.