All Nippon and JAL: widebody LCCs to broaden international offering

COVID-19 has prompted major strategic reviews by Japan’s two largest airlines, and one of the most significant results is an increase in focus on LCCs. This includes the establishment or expansion of widebody low cost operations to serve international markets.

Both All Nippon Airways and Japan Airlines are trimming back their mainline fleets by advancing the retirement of widebody aircraft. In contrast, their LCC units are being boosted.

This reflects changes in demand outlook that the airlines foresee. Premium business travel is expected to remain weaker for longer, with leisure traffic and travel for friends and family visits predicted to bounce back faster when border restrictions are eased. ANA believes – as do many other airlines – that virtual meeting technology will be a long term drag on business travel.

ANA has revealed a plan to establish a medium haul subsidiary using Boeing 787s. It intends to launch this operation in its fiscal year 2022, which begins 1-Apr-2022.

JAL, meanwhile, has said that it will expand the 787 fleet of its own widebody LCC. This airline, named Zipair Tokyo, began passenger operations in Oct-2020.

The new subsidiaries do not fit the classic LCC template, as they have (or will have) two classes. However, it is not unusual for LCCs in the Asia-Pacific region to have a premium cabin in their widebody fleets these days. The lines between full service and low cost widebody airlines have become somewhat blurred, as FSCs offer unbundled products and LCCs branch into business class.

Both Japanese airline groups already have short haul LCCs based on narrowbody aircraft. ANA has Peach, and JAL has Jetstar Japan, which is a joint venture with the Qantas group. These units will also feature more prominently in the parent airlines’ plans.

The chart below shows the current LCC share in the Japanese domestic market. This sector has one less competitor, after AirAsia Japan closed down in Oct-2020. Peach is the dominant player after its integration with the ANA subsidiary Vanilla Air.

Japan’s LCC domestic market share for the week of 16-Nov-2020, as measured in weekly seats 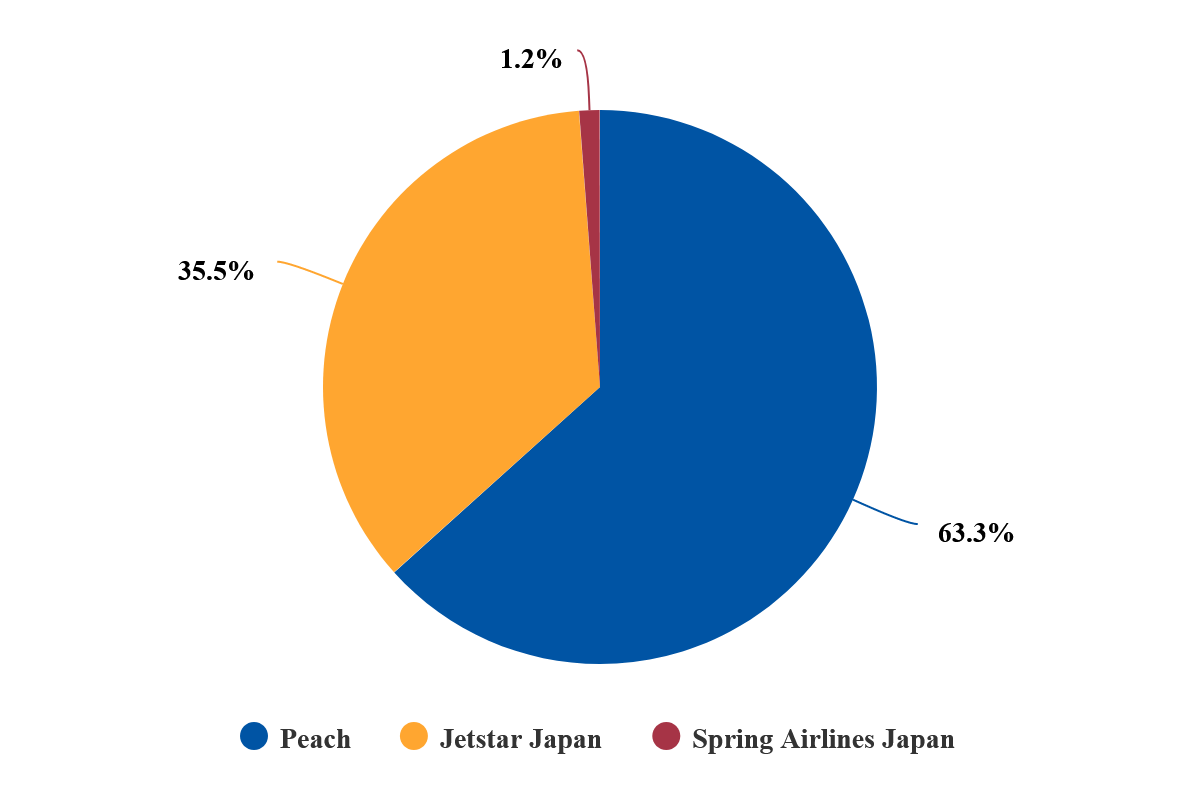 The next chart shows the ratio between LCC and non-LCC seats in Japan’s domestic and international markets over the past decade.

The percentage of LCC seats in the international market has steadily climbed every year, from 4.8% in 2012 to reach 26.1% in 2019. This includes Japanese and non-Japanese airlines.

Annual domestic and international seats in the Japanese market, with LCC/non-LCC ratios 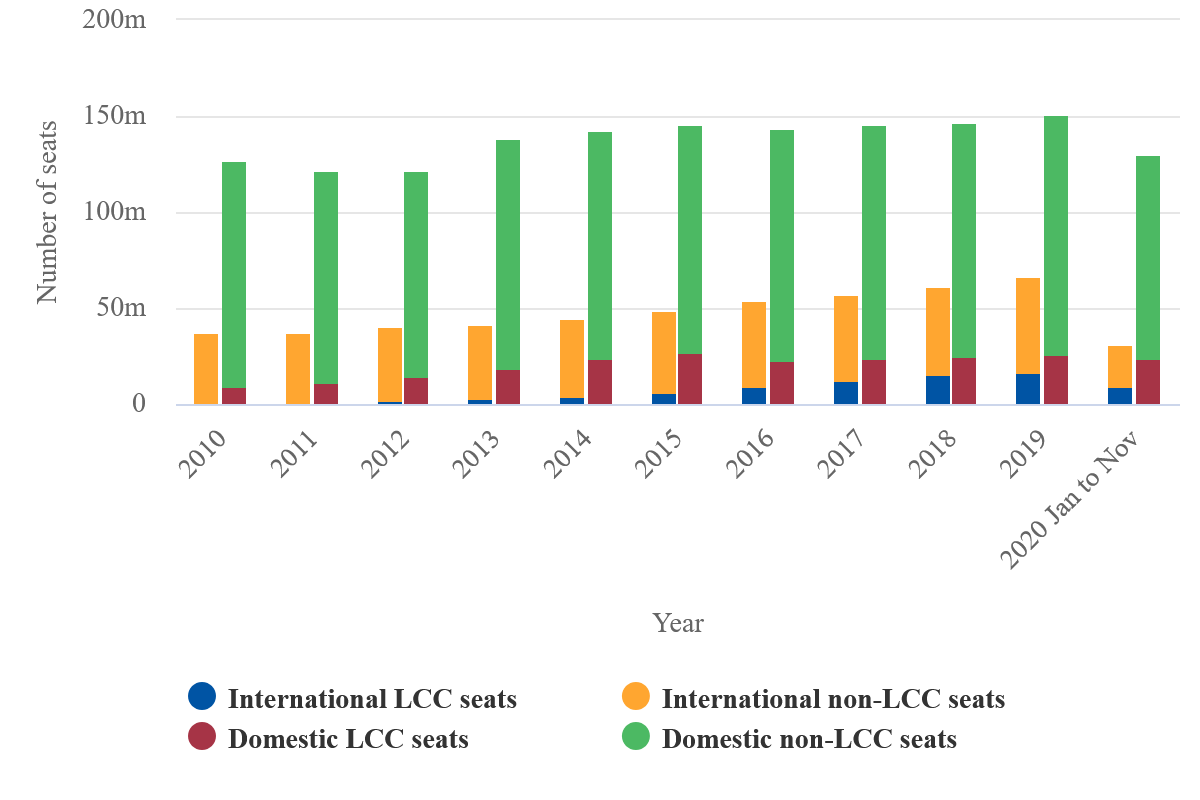 Other major airline groups in the Asia-Pacific region have already launched widebody LCC services. These include Korean Air with its Jin Air subsidiary, Cebu Pacific, the SIA group with its Scoot subsidiary, and Qantas with Jetstar.

One major difference with these groups is that they have combined narrowbody and widebody LCC operations in the same unit, whereas the Japanese airlines have established them separately.

Generally, widebody/medium haul LCC service has proven to be difficult to operate without narrowbody feed. However, the Japanese airline industry is a bit different, in that the Tokyo market is so vast that feed may not be quite as vital.

ANA said the 787s for its proposed international LCC entity will be configured with more than 300 seats, in two classes. As this is far higher seat density than its current international 787-8s (169-240 seats) and -9s (215-246 seats), the airline expects it will achieve lower unit costs.

The parent group is not yet revealing how many aircraft the new unit will have, nor confirming where they will be taken from. However, airline executives did say they are considering using 787-8s from the mainline fleet.

The airline’s name is also yet to be announced. It will use the air operator's certificate of ANA’s existing Air Japan subsidiary, which is primarily a charter airline. The LCC will fly routes to Southeast Asia and Oceania, with a business model positioned between Peach and mainline ANA.

Peach also intends to introduce longer-range LCC flights of its own, using six A321LRs it has on order. This plan was revealed in 2018, so it pre-dated both the COVID-19 crisis and the widebody LCC concept.

At that time Peach said the 7,400 km range of the aircraft would enable it to extend its reach throughout Asia. The first of the A321LRs was previously due for delivery in the current fiscal year that ends 31-Mar-2020, but this has been delayed and the airline has not revealed a revised estimate. The order for six has been boosted from the original deal for two aircraft.

Zipair passenger flights are under way after a delayed start

JAL’s medium haul widebody LCC Zipair was due to launch its first passenger flight in May-2020, but was forced to postpone its plans due to the COVID-19 crisis.

Instead, Zipair debuted with cargo-only flights in Jun-2020. Its first passenger flight – between Tokyo Narita and Seoul – began on 16-Oct-2020. The airline subsequently added one-directional service from Bangkok to Tokyo on 28-Oct-2020.

Zipair will also serve the busy Tokyo-Honolulu route, although this has been delayed by the pandemic. In Apr-2020 the airline sought regulatory permission to begin flying between the U.S. and Japan. The airline initially wanted to fly to Honolulu from October, and now plans to launch the route on 19-Dec-2020. The airline also said that it intended to serve other U.S. points in the future.

The subsidiary currently has two 787-8s that were transferred from the mainline fleet. The aircraft are configured with 290 seats in two classes – comprising 272 economy seats and 18 full-flat business class seats.

JAL plans to boost Zipair in coming years as part of its post-COVID-19 plan, with “steady growth as demand recovers.” Four more 787s will be added to its fleet – with two of these coming in 2021.

Further growth will also be considered, JAL said. In a Jul-2020 filing to the U.S. Transportation Dept., Zipair said its fleet plan includes adding two aircraft per year for the next five years.

In contrast, the JAL mainline widebody fleet will be reduced in size over the next two years. This signals JAL’s belief that the new business model will be better positioned to attract new demand in the immediate aftermath of the pandemic.

JAL is also using some of the funds raised in a proposed share issue to strengthen the group’s low cost carriers. This will include additional funding for Zipair. Investment and loans will also be earmarked for Jetstar Japan, which is 50% owned by JAL, and Spring Airlines Japan, in which JAL holds a minority stake.

Both of Japan’s major airline groups are giving themselves maximum flexibility in a post-COVID-19 world by introducing widebody LCCs. As other Asia-Pacific airline groups have proved, such an approach can help tap a wider range of demand and allow airlines to decide the best model for different routes.

However, the risk with this strategy is that multiple models add complexity.

This will be particularly true of the Japanese airlines, which will each have three airlines in their groups covering full service, short haul low cost, and long haul low cost segments. Careful planning will be needed to avoid affecting the markets of other airlines in the same group. For example, Singapore Airlines recently combined its previously separate long- and short-haul LCCs under a single brand and management.

Japan's airline market has always been different, but until recent years it has relied primarily on outbound travel. As the country's directional tourism flows change, with a surge in inbound travel, strategies may need to adapt in ways that conform more closely to the other international models.

But in the meantime JAL and ANA have obviously decided this multifaceted model will give them the best weapons to compete in the eventual international demand recovery.