All Nippon Airways order for 70 aircraft to help it shift to international markets, catch up to JAL

All Nippon Airways' order for 70 aircraft – 20 777Xs, six 777-300ERs, 14 787-9s and 30 A320neo/A321neos – is part of a calibrated strategy to shift its focus to the faster growing international markets as Japan's domestic environment remains slow. In 2015 the previously all-domestic ANA expects to have more international than domestic capacity for the first time in its history. Japan Airlines has historically been larger in the international market while ANA was dominant domestically. ANA's more bullish long-haul growth with the 777X, larger than the 777-300ERs it is replacing, contrasts to JAL's 2013 decision to replace its 777-300ERs with smaller A350-1000s.

In ANA's order there is considerable replacement of existing aircraft; over two-thirds of the order will be used for replacement. But there will be international, and particularly long-haul, growth as ANA capitalises on Japan being a more attractive destination with a weaker yen, as well as Japan's advantageous geography for North America-Asia traffic flows. International is to drive growth at ANA. These objectives are helped by ANA's joint-venture partners who should benefit from ANA having a larger international role, although the trade off may be yield pressure.

70-aircraft order is mostly for replacement

ANA's selection of the 777X gives Boeing the 777 presence it was exceptionally eager to keep after JAL in Oct-2013 ordered the A350, largely to replace its existing 777s.

While JAL's order for 31 A350s is larger than ANA's order for 20 777-9Xs, ANA also ordered six additional 777-300ERs and 14 787-9s. The additional 777-300ERs will be among the last to come off the production line before Boeing starts to assemble the 777X. Boeing has been eager to sell these late production aircraft, seen as less attractive given how quickly they will be outdated, but of course discounts can compensate for that.

ANA is keeping a foot in both camps by also ordering 30 A320neo family aircraft to replace 737-500 classics and current A320s. This order will see Airbus have all of its aircraft families in service in Japan by 2020, although many in small quantities. ANA has not given an indication on the future of its 45 in-service/on-order 737NGs, meaning ANA could again in the future create a competition for the manufacturers.

The 20 777-9Xs nearly replace ANA's existing 19 777-300ERs in service. ANA has also ordered three 777-300ERs, in addition to recent order for six. Likewise the 30 A320neo family aircraft replace the 29 737-500s and A320s ANA operates at its mainline division and ANA Wings. The widebodies, including the additional 787-9s, have a degree of flexibility with regards to the exact growth/replacement timeframe. ANA still has a large fleet of 767s and 777A aircraft to replace beyond what the 787s cover.

ANA's fleet will reach 250 aircraft, widening the gap with JAL

ANA says this order will tip it past the threshold of having more than 250 aircraft at its main flying divisions (excluding its affiliatedLCCs). ANA in Feb-2014 forecast a fleet of 246 at the end of FY2016, up from the 230 it expects to have at the end of FY2013 (the 12 months to 31-Mar-2014). This is faster fleet growth than at JAL, which expects to end FY2013 with 220 aircraft, increasing to only 222 in FY2016. During JAL's bankruptcy restructure ANA overtook JAL in having a larger fleet. JAL in the mid and late 2000s had upwards of 290 aircraft. 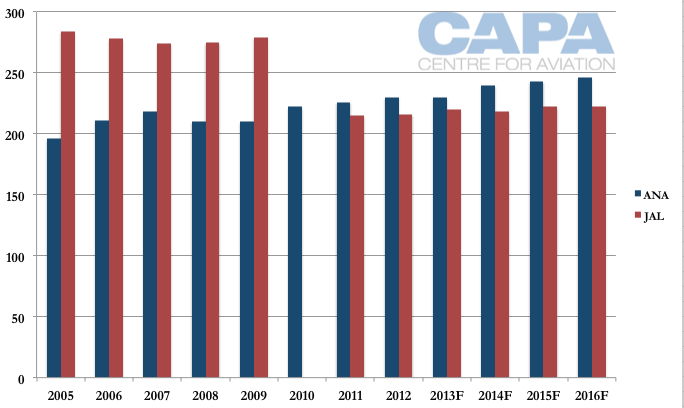 International growth, and catching up to JAL, is the heart of ANA's strategy

While ANA may now have more aircraft than JAL, JAL still has a larger presence in international markets than ANA, even after the drastic cuts following its restructure. ANA has a larger domestic fleet than JAL. 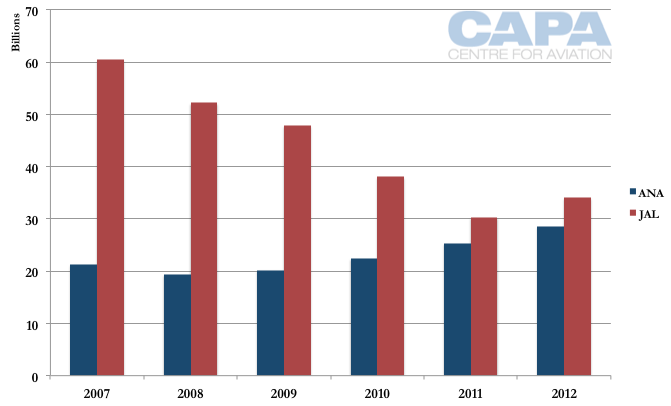 ANA's focus on growing international capacity is part of its three-pronged strategy to move away from its domestic heartland. The first two prongs are establishing LCCs to spearhead new types of growth (ANA is a minority shareholder in Peach and the single shareholder in Vanilla Air) and its own mainline international growth.

The third part is investing in other Asian airlines to secure revenue in growth markets. This is a relatively revolutionary concept for Japan and ANA, and is also compounded by limited benefits ANA might bring as well as few airlines to buy. ANA's investment in Asian Wings Airways was its first tentative international move and more are planned.

ANA's international presence is strengthened by two core joint-ventures: one across the Pacific with United Airlines and one to Europe with Austrian, Lufthansa and Swiss.

International volume may increase, but there could be pressure on yield

ANA appears to be taking a volume approach whereas JAL is emphasising quality: JAL re-furbished its cabin, introduced more space and amenities like in-flight internet while ANA is opting for 10-abreast in economy on some of its 777-300ERs, which no other Asian carrier with in-service 777s has done.

JAL's strategy is similar and has been consistently reinforced. 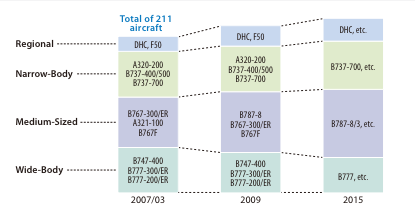 A concern for ANA is if it can grow internationally – in an increasingly competitive environment – without degrading revenue. 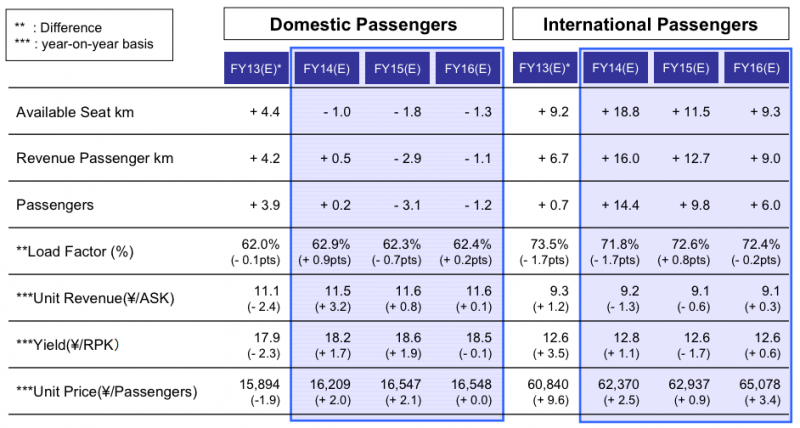 International growth in Japan in recent times has focused on small but prized slot additions at Tokyo Haneda airport. With those slots now allocated and being put to use, the focus shifts back to Tokyo Narita.

With more Haneda slots expected to be allocated in the medium-term, ANA is planning to grow long-haul flights from Narita, which will shift some Tokyo international marketshare from Haneda back to Narita.

While international connections (for sixth-freedom traffic) are increasingly available at Haneda, ANA (and JAL's) broad strategy is for Haneda to host flights with strong local traffic; Haneda's convenience over Narita allows airlines to have a yield premium. Narita remains the primary airport for international connections, mainly in the North America-Asia market. 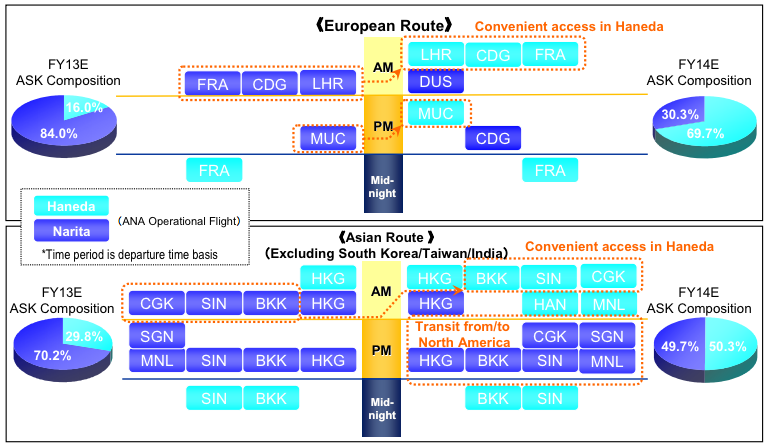 Larger narrowbodies are for the domestic market, where much optimisation awaits

While international developments are very much the heart of the story with ANA's aircraft order, not to be overlooked is ANA's decision to move from small/medium-size narrowbodies like the 737-500 and A320 to A321neo on domestic and smaller regional markets. How this fits in ANA's strategy is unclear.

ANA during its Feb-2014 strategy briefing candidly remarked of its domestic market: "we cannot expect to see significant growth in overall demand". Adding capacity through up-gauging is efficient, or alternatively ANA could look at using larger narrowbodies on flights currently served by widebodies with low load factors. ANA's average domestic load factor around 60% is low, but that average contains high load factors at peak times and very low load factors at off-peak times.

Outlook: Japan still has to prove it can boost visitor volumes - on Japanese airlines

There are a number of moving parts to ANA's goal of capturing more international traffic. There is opportunity as JAL still has a fraction of the capacity it once did (although the services it withdrew were mostly unprofitable), and as US carriers decrease Japanese capacity in favour of non-stops to other Asian cities. Tokyo acted as the hub for American, Delta and United: Delta and United with onward fifth-freedom flights while American has its partner, JAL. United's Tokyo-Bangkok is the latest intra-Asia service a US carrier will eliminate.

Meanwhile American has ended its Tokyo-New York flight (to be picked up by JAL, but with a lower-capacity 787). While the capacity reductions are centred around traffic volumes that once connected to another Asian point, taking connecting-oriented capacity out of Japan also means taking out point-to-point capacity.

But other points remain to be proved, mainly that Japan's yen depreciation will make it a more attractive destination. Japan has some efforts to go to change its image as an expensive place to holiday. Japanese carriers have previously relied on Japan's population being willing to pay a premium to fly on a Japanese carrier, but future non-Japanese inbound tourists may not be so inclined.

ANA will also need to continue its cost-cutting programme, which so far is showing encouraging signs. ANA in the medium-term will likely still be at a cost disadvantage to JAL, which – unfairly, in ANA's view – substantially lowered its cost base during restructuring.

Amid the local factors is the regional outlook of carriers expanding their Asia-North America capacity. While this increases competition, ANA has the advantage of being an early starter, along with a growing international reputation. While main competitor JAL also has joint-ventures, elsewhere in Asia deep partnerships are limited. The benefits of ANA's immunised joint ventures, with United and Lufthansa, also give ANA a significant edge.