ANA Group announced (18-Jan-2011) details of its route network, fleet and corporate plan for the financial year commencing on 01-Apr-2011, capitalising on the expansion of capacity at Tokyo airports in 2010. In addition to an unspecified number of B787 deliveries from 3Q2011, the carrier will take delivery of nine new aircraft and retire nine older and smaller aircraft.

ANA plans to increase capacity (ASKs/FTKs) in FY2011 compared with FY2010 by 17.4% for international services, 2.6% for domestic and 2.6% for freight. International flights will increase by 16.3%, domestic by 2%. Cargo flights will be cut by 1.4%. ANA will expand domestic operations from Tokyo Haneda and maintain operations at most other airports in Japan.

The carrier plans to launch its trans-Pacific JV with United Airlines and Continental Airlines on trans-Pacific routes on 01-Apr-2011. The alliance will result in integration of the airlines’ domestic and international networks, along with common fares, frequent flyer programme reciprocity and timetable adjustments.

Shares in ANA were up 0.3%, while Japanese LCC Skymark Airlines gained 6.2%, continuing its five-day upward run. The stock has gained 3.9% for the year to date.

Elsewhere, Air New Zealand shares were down 3.3%, while Skywest Australia dropped 3% and Virgin Blue was down 2.3%. Qantas shares rose 0.8%. 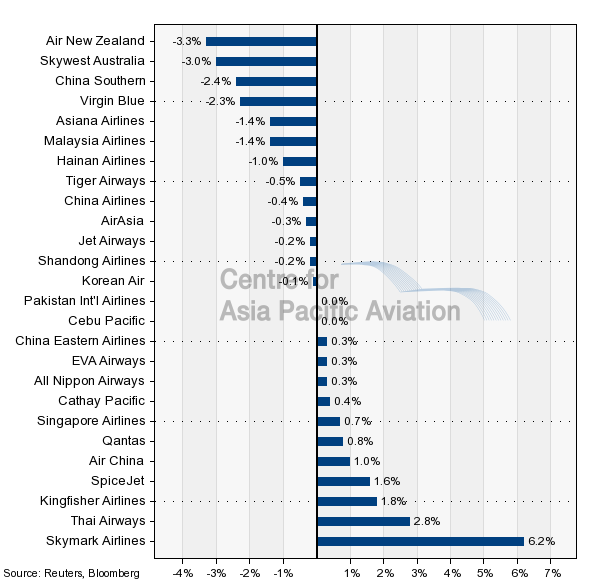