Alaska Airlines may account for only 3.5% of the US domestic industry, but it has a huge footprint in the minds of analysts and investors for being the only US airline to successfully restructure without bankruptcy. Indeed, the carrier is so successful, it has become an industry pace setter leading others to begin the financial transformation it started in 2006.

What is so interesting about the small and nimble carrier is the fact it was a ground breaker in terms of discussing the metric now used for success by other airlines – return on invested capital (ROIC). Beginning in 2006, Alaska Airlines took up the mantra successfully, while the rest of the industry adopted the approach following the 2008/2009 recession.

Speaking before the Dahlman Rose Transportation Conference, CFO Brandon Pedersen reported the carrier’s pre-tax margin hovers between 10% and 11% while its peers are down around 3%. It was only bested by one of the more unusual carriers in the US – Allegiant.

Five years ago it set the 10% goal, targeting 2010 for realising that ambition, which it achieved. In the first half of 2011 its pre-tax margin reached 11.5%. Mr Pedersen explained to investors attending the two-day event that the company’s actual goal was to achieve higher pre-tax margins in order to average 10% over the course of the business cycle.

He attributed the company’s success to the simple explanation it gave to workers who have been instrumental in making Alaska such a prominent airline. For every dollar the company makes, keeping 10 cents enables the company to achieve its other goals, namely a good career where employees participate in its success, and a return to investors “who have traditionally been left out of the equation in the industry.”

Mr Pedersen reported its dedication to the ROIC has served to broaden the interest of investors as its share price flirted with all-time highs for the past year. It also achieved the ranking of third or fourth in terms of market capitalisation. It has delivered five consecutive quarters of record profitability.

Focus on the network

In addition to its employees, he said, the key was focussing on diversifying the network to smooth out the seasonality as well as matching the right capacity to demand. It has managed this by growing, although it has not added many aircraft due to an increase in aircraft utilisation. In 2001, Alaska and the West Coast constituted 86% of the company's business, but is now only 50% of the network, thereby reducing the risk of competitive incursions. 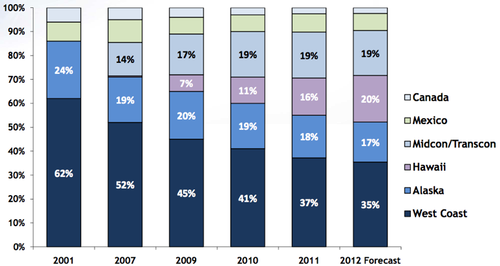 Alaska Airlines was also a front runner in focussing on customer service, discovering that an on-time airline lowers costs. In addition, it drove up load factor, growing capacity and contributing to positive unit-revenue growth. Load factors rose from the worst in the industry in 2001 at 59% to one of the best last year at over 80%. 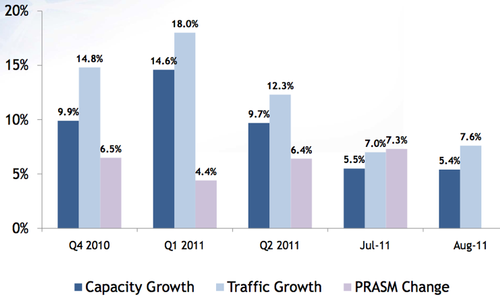 Traffic growth always outpaced capacity growth to the point that PRASM growth was “more than enough” to offset the growing fuel prices.

While the remainder of the industry was increasing costs, unit costs at mainline Alaska dropped 5%, with the expectation it will fall another 3% this year, becoming only one of two carriers able to achieve this result. Even so, US Airways deserves an acknowledgment with its 0.4% increase, according to Alaska, especially given the fact that it does not hedge while coming out with lower fuel costs than its peers. 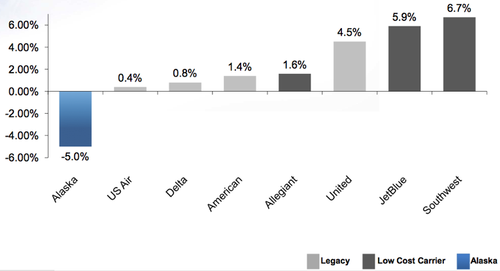 Alaska has accomplished its cost savings by reducing overhead by USD28 million and increasing productivity, which rose 8% in the first quarter and 5% in the second. However, with costs lower than legacies but higher than low-cost carriers, it continues to reduce costs seeing it as critical to long-term success. It is targeting CASM ex fuel at 7.60 by year end.

Mr Pederson called fuel 'the silent killer' especially since the crack spread or the refining margin has kept fuel costs high for airlines, despite the fact the price per barrel has dropped.

“We believe the best hedge is not to burn it in the first place when our fuel is at USD3.20 per gallon,” he said. “That means fuel efficiency is key and that is why we have the most fuel-efficient aircraft with the narrowbody fleet. The B737-900ER is eight to 10% more full efficient than the -800.”

Its fleet plan is designed for maximum flexibility, allowing it to grow 4-6% through a combination of deliveries, options and retirements coming between now and 2014, depending on what the economy has in store. Part of this strategy would include increasing utilisation.

The carrier expects new Hawaii services to increase 1.5% in 2012 compared with 2011 when it will become 20% of the business. In addition, annualisation of current Hawaii services add another 1.5%. It is also growing capacity by 2% elsewhere in the network while increasing departures by 2.5%.

The 900ER is the most fuel-efficient narrow body 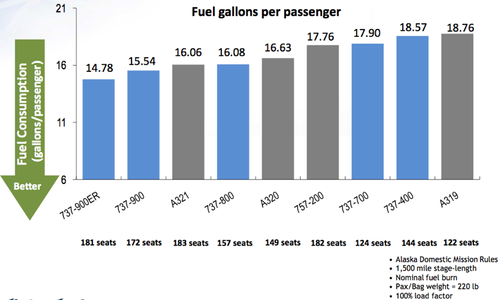 It was also first to begin repairing its balance sheet having dropping its debt to capitilisation from 81% in 2008 to 63% today, one of the lowest in the industry. This was all accomplished while it was retaining pension contributions and maintaining a strong cash position, now at USD1.2 billion or 28% of trailing 12-month revenues. 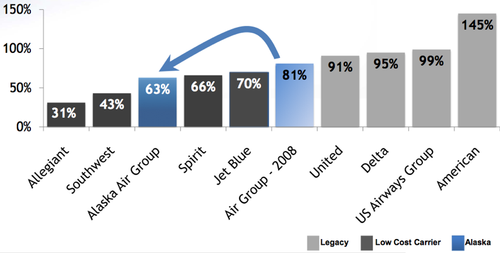 It has also reduced its outstanding shares by 11% while others have been issuing new equity. 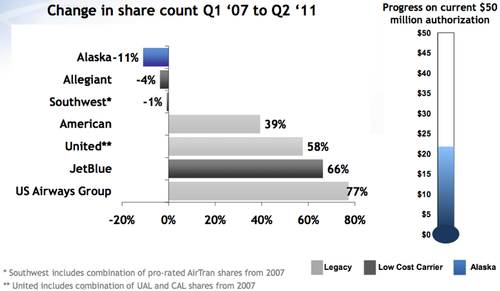 Capital spending is designed to generate cash flow through which the airline intends to continue funding its development. Already, it shares the number two spot with JetBlue for cash generation as a percent of revenues at 28%. Growth generated free cash flow of USD340 million in 2010 and is over USD100 million in the first half owing to aircraft deliveries. Cap ex is expected to be between USD350-400 million over the next few years.

“A 10% ROIC and the ability to generate free cash flow are the guiding principles for us,” Mr Pedersen concluded. 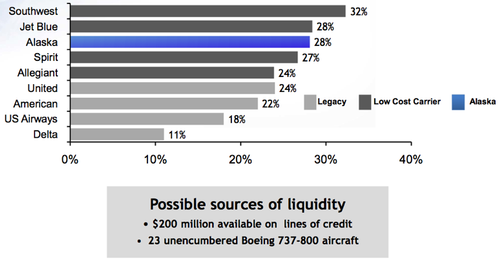