Alaska continued its good results, achieving its goal of 10% return on invested capital and posting record net income of USD252.1 million compared with USD121.6 million in 2009. Its fourth quarter profit reached USD64.8 million, a dramatic swing from the USD24.1 million reported in 4Q2009.

"We are very pleased to report record fourth-quarter and full-year profits,” said chairman Bill Ayer. “These results were driven by strong revenue growth, excellent cost management, an on-time operation, and promising new markets. 2010 was a record year in nearly every regard and reflects the efforts of the past decade as much as the last twelve months."

The good results prompted the airline to announce growth plans for 2012 and beyond, and Mr Ayer indicated that the results flowed from its 2003-launched 2010 plan. CFO Brandon Pedersen indicated the results for the year translated into a record 11.1% pre-tax margin bringing the 2010 ROIC to 10.7%. He also noted 2010 was the first time since 1999 that Alaska reported profits in all four quarters

“While we support industry efforts to balance supply with demand, we believe the most efficient operators should grow more than the industry average,” Mr Ayer told analysts during yesterday’s call. “In contrast to flat domestic industry capacity since 2003, Air Group ASMs have grown 18%. At the same time we have reduced our non-fuel unit costs from 8.73 cents in 2001 to 7.85 cents in 2010. We are continuing that trends because, in my view, we are now in a permanently low-fare environment. With our new fleet order we have the option to grow 3-6% annually as long as conditions permit. But let me be clear, we will not grow if conditions don’t permit it. ”

Alaska announced a 15-aircraft order for Boeing 737s starting in 2010, including 13 -900ERs for delivery in 2013 through 2014. The new aircraft will go into trans-continental and mid-continental markets as well as high-density West Coast markets. Mr Ayer noted that Hawaii was a question mark when it launched its 2010 plan, but it now represents 15% of its flying, bringing it to a close second to United in terms of daily West Coast departures. 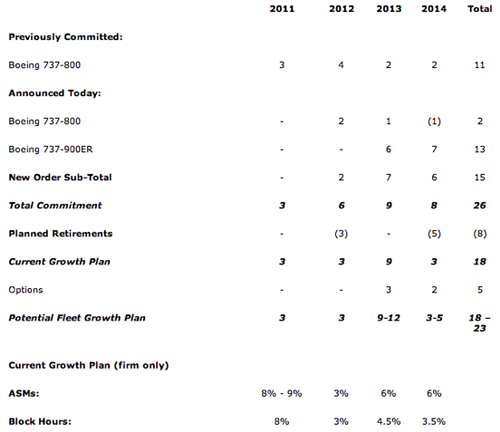 President Brad Tilden reported the new ER aircraft will have between 21 and 27 more seats and lower unit costs without a significant increase in capital investment. “It is 6% more fuel efficient than the -800s and 8% more fuel efficient than the Airbus A321,” he said. “It will enable us to reach many more markets than the current 900s.” Mr Tilden also announced that by April 2012, Alaska will have called back all furloughed employees.

The executives reiterated their flexibility to pull capacity as necessary, as they own the vast majority of the aircraft. “If we were to see fuel prices at USD120-130 we will get prices up and if increased prices reduce demand we would do what we did in 2008,” said Mr Tilden. “We would do a market-by-market analysis and get the seats right in each market. that Algebra has worked well for us and we could also use available aircraft in new markets like Hawaii, St Louis and Houston. If that doesn’t work we can sell aircraft or reduce utilization.”

Vice President, Planning and Revenue Management Andrew Harrison reported the Mexicana shutdown created an opportunity to the point that Mexico now accounts for 11% of its total ASMs. Having no comment on the coming resurrection of the bankrupt Mexican carrier, he only said the situation bears watching. He rejected the idea of going further afield with the -900ERs when queried whether Brazil might be in the plans.

“We are very focussed on our current network and capitalising on the economic power of rhte ER in high-density market and serving trans-con,” he said. Mr Pedersen added that the company would not deviate from its strategy to grow in strong, point-of-sale cities.

Mr Ayer said that having accomplished the ambitious goals set seven years ago, the company’s focus will be achieving the same results for Horizon which has just a 5% return on invested capital. Horizon President Glenn Johnson said the regional will not grow until it has reached the 10% target.

To that end, the company announced the elimination of the Horizon Air 30-year-old brand in favour of Alaska’s Eskimo as part of the regional’s shift to eliminating its branded service for a traditional capacity purchase agreement. As part of the brand change, Horizon's Bombardier Q400 fleet will be repainted with a new Alaska livery but will continue to include the Horizon logo on the sides of the aircraft, which will now appear in Alaska's dark blue color.

Alaska will have the last 13 CRJ 700s out of its fleet by June when Horizon will join Alaska as a single aircraft fleet. However, the Q400 is unsuitable for five lines of flying and Alaska has contracted with SkyWest to fill in these West Coast markets – mostly in longer city pairs between the Pacific Northwest and California – by subleasing five CRJ 700s. The contract is for five to six years, the length of Alaska’s obligations on the aircraft. Alaska indicated the remaining eight will be subleased to other domestic regionals.

Mr Tilden also reported Alaska is considering deploying Q400s in the Alaska market, made easier with the elimination of the Horizon brand. The move, if done, would not come until next year and would lower operating costs on lighter traffic city pairs. “We are doing that so we can pass the lower costs on do our passengers,” he told analysts, adding that it would involve between two and three aircraft.

Mr Ayer reconfirmed the company’s commitment to Horizon, once again rejecting a sale of the unit, adding that it contributes to Alaska.

He concluded by saying the company was encouraged by the demand trends despite the slow overall economic growth indicating his biggest worry remains fuel costs. Mr Harrison noted that since 2008, when fuel prices exploded, Alaska has increase ASMs 10% with an increase of 8.6 points in load factor on flat departures. He noted that, still, revenues were up 9%, giving him confidence that the fundamental changes in Alaska’s economics will help offset fuel hikes. It was noted that in the past six weeks fares have gone up between USD7-15 while the percentage increase in traffic was higher than the growth rate. It increased first class seats 5% and paid first class was up 23% versus single-digit growth last year.

Mr Ayer noted with the most fuel efficient aircraft in its class coupled with its fuel hedging success, Alaska is well positioned, especially after achieving a fundamental change in the economies of its business. The executives mentioned Alaska’s small size as a key factor in its nimbleness over its peers.

When asked about distribution changes in the industry, Vice President Marketing Joe Sprague provided one of the more interesting answers when he put industry profitability into context with GDS fees. “We ended 2010 with Alaskaair.com’s share at 48% and that is up from 35% from five years ago,” he said, acknowledging global distribution system (GDS) contracts were up this year. “Our other direct channel through our call centres were at 11%. Our view is distribution costs are definitely an area that should be reduced.

“In the last 25 years ATA stats show the industry profit of about USD1-2 per passenger and a pre-tax loss of USD2-3 per passenger,” he said. “Against this backdrop the airlines are paying GDS fees of USD3.50 and USD4 per segment. so the economics are clearly out of whack. From the customers perspective, we believe they can learn more about us and have more relevant content offered to them when they shop alaskaair.com. We’d like to see more of that. We are not ready to make any big changes but monitoring the situation closely.”

Consolidated total operating revenue for the fourth quarter was USD958.5 million, versus USD846.1 million in 4Q2009. Mr Pedersen noted the 13% improvement was on an 8% increase in capacity and a 5% increase in unit revenues. These were offset by a USD42 million increase in fuel costs.

For the full year, Alaska took in USD3.8 billion in revenues, up 13% but offset by a USD150 million increase in economic fuel costs. He also said that non-fuel costs were flat year on year, on a 5% increase in capacity, as the company reduced overhead by USD11 million in addition to the USD17 million reduction in 2009. Productivity rose 9.5% for the year to 150 passengers per FTE per month.

Mainline passenger revenues rose 17% in the quarter on a 10% capacity increase as unit revenues increased 5.8%. The December PRASM jump of 6.8%, is notable he said since capacity was up 11% for the month when PRASM jumped 1.4 points above the industry. PRASM rose 6.3% on a 3.6-point increase in load factor to 83.8%, the highest among the largest 10 domestic airlines and a first for the carrier, according to Mr Tilden.

He said unit revenues increased in all regions but Mexico and trans-con did particularly well.

This year’s mainline unit costs are expected to go down another 3% to 7.6 cents and for the first quarter the non-fuel mainline costs will be 7.9-8 cents or 5-6% lower than 1Q-2010. First quarter capacity will rise 13% followed by 10%, 5% and 5%, for the following three quarters resulting in a full-year increase between 8-9%, unchanged from its guidance.