Alaska Air Group during the last few years has consistently outperformed its US carrier peers in a financial metric – return on invested capital (ROIC) – that is prevalent in discourse in other industries but has only surfaced in discussion among airline executives during the last few years. Since 2010 the carrier has exceeded its ROIC targets on an after tax basis and has posted annual profits for the last nine years. Despite its consistent profitability, Alaska’s robust financial performance is often overlooked by the investment community, leaving executives scratching their heads as to why the company’s consistent financial results are not more recognisable.

Even as Alaska delivers consistent profitability, questions often arise over the company’s growth prospects at its two subsidiaries – Alaska Airlines and Horizon Air (which now operates under the Alaska banner). The carrier holds an advantageous position as the leading airline in Seattle, where it can feed into long-haul flights operated by its partner Delta Air Lines. It also has a strong relationship with American Airlines, but it is not certain how that partnership will evolve once American and US Airways close on their merger and complete a roughly 18 month-long integration process. Alaska does have the opportunity to flesh out its domestic network, and remains bullish that it will still deliver sound financial results with planned annual capacity growth of 4% to 8% during the next few years.

Since 2008 Alaska’s after-tax return on invested capital has grown 7ppt to a 13% return in 2012, which marked the third consecutive year the company exceeded its 10% ROIC target. Since measuring ROIC is still a young concept in the US airline industry, different airlines use various methodologies to calculate ROIC. But taking the different methods into account, Alaska believes it trails only behind Delta Air Lines, which is arguably the strongest US legacy airline as United continues merger integration with Continental and American and US Airways aim to begin their integration in 3Q2013.

Alaska Air Group's 2012 ROIC compared with its US airline peers 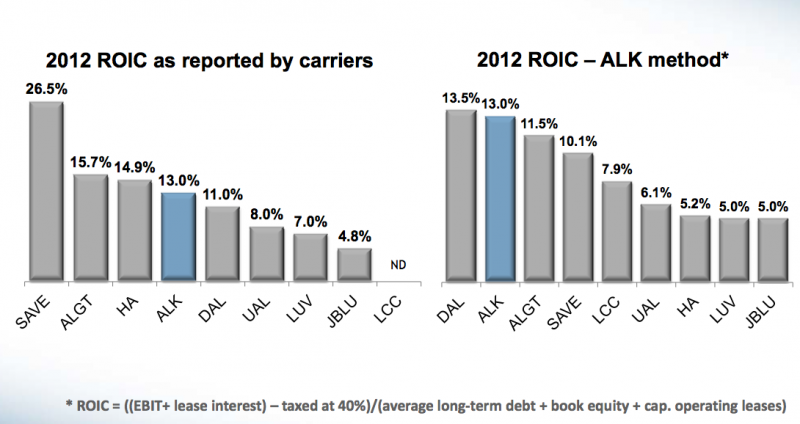 At the same time, during the last few years Alaska has had a marked focus on paying down debt, and has improved its debt-to-capital ratio considerably since 2008 from 81% to 54% in 2012.

Recognising its debt levels were unacceptable, Alaska CFO Brandon Pedersen recently told investors that during the last four years the company has generated USD2.3 billion in operating cash flow, which has allowed the carrier to invest in modernising its aircraft and pairing down to a single fleet of Boeing 737 narrowbodies at the mainline level and Bombardier Q400s operated by Horizon.

Alaska during that time has also reduced its debt and capital leases by more than USD1.1 billion and repurchased roughly USD200 million in stock.

Alaska’s favourable performance is not reflected in its valuations; a low profile doesn't help

Alaska’s consistent profitability, paying down of debt and favourable share price valuation relative to US major carriers and the larger low-cost carriers, curiously has not drawn a high level of attention among the investment community.

The lack of recognition for its performance also perplexes Alaska as Mr Pedersen stated the company’s multiple lags other carriers as its enterprise value divided by pre-tax interest and amortisation is below the major US carriers and low-cost competitors. 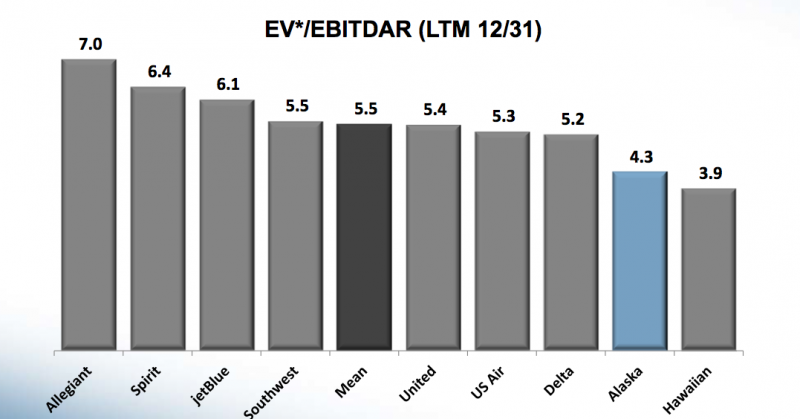 Some of the lack of recognition of its performance could be attributed to Alaska’s low profile outside of its core markets of the US west coast and service to Hawaii. Mr Pedersen remarked that as Alaska was looking to grow outside of the state of Alaska and the US Pacific northwest, “we are taking a look at our brand and how it resonates with potential new customers”.

After making a major push into Hawaii during the last few years after ATA and Aloha collapsed in 2008, Alaska in 2012 expanded its long-haul US transcontinental network with new service from San Diego to Orlando and regional California markets of Fresno, Monterrey and Santa Rosa. The company during 2012 also launched mainline service from its Seattle hub to Kansas City and Philadelphia as well as new service from its Portland hub to Washington National airport.

In Mar-2013 Alaska is introducing flights from San Diego and Boston followed by new service in Apr-2013 from Seattle to Salt Lake City.
The transcontinental push comes as Alaska levels off its growth to Hawaii, which will just increase roughly 5% year-over-year in 2013 compared to 615% from 2007 to 2008 as Alaska entered the Hawaii-US west coast market. Between 2007 and Mar-2013 Alaska went from no service to Hawaii to 26 daily nonstop flights from the US west coast to the Hawaiian islands. 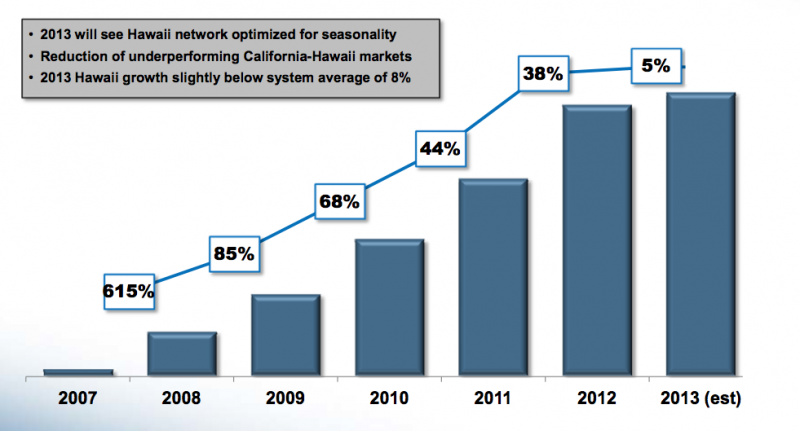 While the expansion in Hawaii has obviously made a contribution to Alaska’s bottom line, Mr Pedersen does acknowledge that unit revenue performance in some of Alaska’s Hawaii markets has not met the carrier’s targets, and as a result the carrier is moving to make seasonal capacity adjustments to improve its performance on those underperforming routes.

Higher capacity growth relative to the US industry average; to grow 8% in 2013

Another aspect of Alaska’s operations that potentially spooks investors is the company’s high available seat mile growth relative to the US industry average, which based on data from Airlines For America was about 1.4% in the US domestic market from 2Q2012 to 2Q2013. During 2013 the carrier plans to grow capacity by about 8%, fuelled in part by the net delivery of three aircraft (nine deliveries of higher-gauge 181-seat Boeing 737-900ERs and six returns – three 144-seat 737-400s and three 124-seat 737-700s).

Explaining the rationale behind Alaska’s planned 4% to 8% annual growth during the next few years, Mr Pedersen stated the company’s internal estimate is 1% growth equals one aircraft operating on transcontinental service or on flights to Hawaii. “Do we think there are profitable opportunities for us to deploy five or six airplanes per year? Yes we do,” Mr Pedersen remarked. “And that doesn’t feel like a big number to us.” He also stressed that Alaska owns about 75% of its fleet, which at year-end 2012 stood at approximately 173 aircraft, giving the carrier low-risk flexibility to dial back growth if necessary.

As Alaska looks to flesh out its network through the addition of new transcontinental markets it also needs to ensure the rest of its more mature markets are running profitably to absorb the spool-up of new routes.

Mr Pedersen believes there are growth opportunities for Alaska in new transcontinental markets from its Portland and Seattle hubs as well as California. The carrier has a well-established reputation in those origin markets so the strategy is to build brand loyalty as the carrier works to expand its transcontinental network. Mr Pedersen likened new markets to research and development, explaining that naturally the younger markets would have lower margins. The goal is to develop those markets while stronger routes reach maturity to balance out the new market growth.

Alaska’s two major partners in the US are American and Delta, and the carrier recently outlined plans to expand its partnership with American to include 22 of Alaska’s routes to Hawaii and some transcontinental flights. The carriers were able to expand their relationship after American negotiated a new contract with its pilots that lifted previous restrictions on the scope of American’s domestic codeshares. Mr Pedersen stated it was too early to speculate how the American-US Airways merger would affect Alaska’s relationship with American. The role of US Airways’ Phoenix hub in the combined network will likely be a factor in shaping the future relationship between the merged carrier and Alaska given Phoenix’s location in the US southwest.

The relationship between Alaska and Delta is likely to grow as Delta works to increase its long-haul flying from Seattle, particularly to Asia. Alaska is helping to drive Delta’s expansion by feeding passengers from its extensive west coast network to Delta’s long-haul service.

See related article: Delta leverages its strength in Seattle and relationship with Alaska Airlines partnership to bolster service to Asia

Alaska’s outlook for 2013 is relatively positive as Mr Pedersen stated the business environment is stable and corporate demand was remaining steady. Overall the carrier retains a solid financial foundation and fleet flexibility that should allow it to weather any downturn in demand triggered by automatic spending cuts in the US government that took effect on 01-Mar-2013. While its growth prospects might lead some investors to take a timid approach to the carrier, Alaska’s consistent returns during the last few years show the company is adept at turning profits even as its capacity growth is higher than the industry average.

The risks in its business model – expansion into new markets that are not certain to produce profits – are inherent for all airlines, and Alaska likely deserves more attention than it receives for sustaining profits while managing the typical uncertainties that accompany running an airline. This would be a pity if it were because of its low profile. Then again, that might be a place for management to look.