Alaska and Delta’s relationship unravels. Deciding when a partnership is over is a big call

Alaska Air Group began 2014 facing an imbalance of supply at its headquarters and largest base Seattle. It was created by an unlikely but now familiar foe: its largest codeshare partner by revenue Delta Air Lines.

Throughout much of 2013 Delta blatantly touted its build-up in Seattle that includes numerous new flights into key domestic markets served by Alaska. Delta is building Seattle into a major US gateway on the west coast to Asia, and has decided it would rather feed passengers into those long-haul flights on its own metal rather than leverage its long-standing relationship with Alaska.

Alaska continues to field questions about the status of its partnership with Delta and how it intends to compete with a much larger enterprise in Seattle. Alaska believes it is well-equipped to withstand both the competition and the diminished relationship with Delta. One major part of its strategy is a capacity shift to ameliorate the oversupply in Seattle.

During the last year while Delta has touted its strategy in Seattle (largely without mentioning Alaska), Alaska Air has constantly received queries about its response to Delta’s encroachment.

By YE2014 Delta and Alaska will compete directly on 13 overlapping city pairs from Seattle, including nine of Alaska’s top bases. 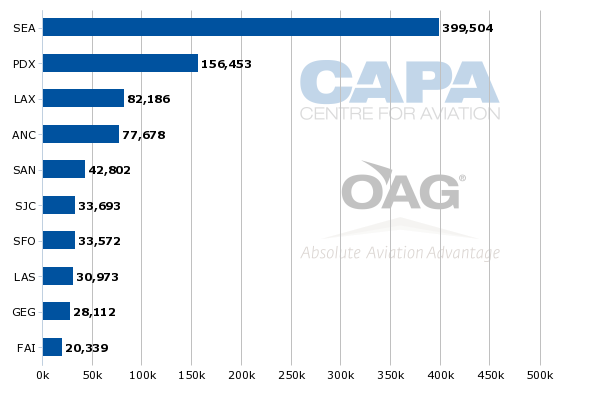 Once Delta’s current phase of expansion is complete, the carrier will offer more than 80 daily roundtrip flights from Seattle, and hold roughly the same seat share at the airport as Southwest and United combined, Alaska CFO Brandon Pedersen recently explained.

CEO Brad Tilden estimated that year-on-year during Jul-2014 Delta’s daily seat share in Seattle will increase from 700 to 3,200, a jump of over 350%. However, he also drew attention to the fact that Alaska’s daily seat share from Seattle during that time is roughly 11,000, highlighting the carrier’s still-dominant position in Seattle.

However, Alaska is reallocating some of its capacity to mitigate the oversupply in Seattle. This is being achieved largely through a push that entails the addition of seven new markets from Salt Lake City during Jun-2014. 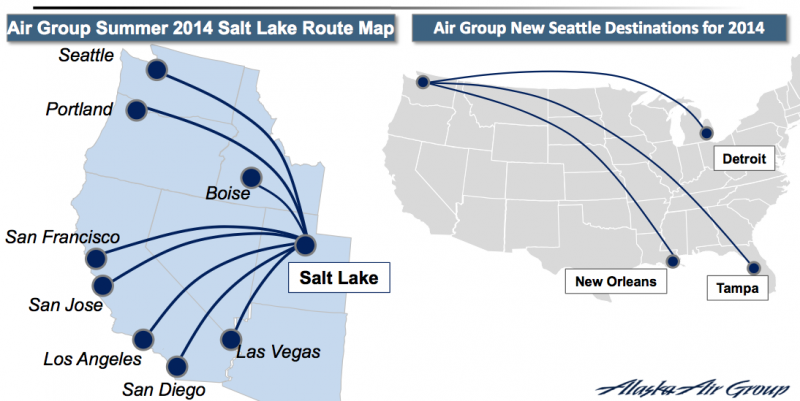 This is a rapid expansion by Alaska from Salt Lake City, which is Delta’s fifth largest hub. Alaska only started serving Salt Lake City in Apr-2013 with service to Seattle.

Outlining the logic for Alaska’s decision to expand in Salt Lake City, Mr Pedersen explained the carrier is rebalancing capacity from an area where there is too much supply to another market where there is not enough capacity. Data from CAPA and airport reports show that Salt Lake City’s passenger growth was less than 1% year-on-year in 2013 after falling 3% in 2011 and 1.4% in 2012. 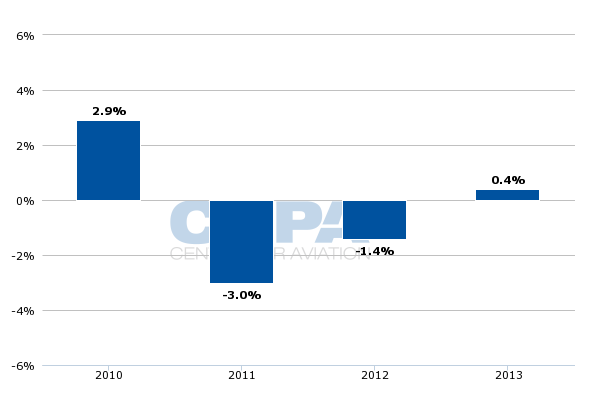 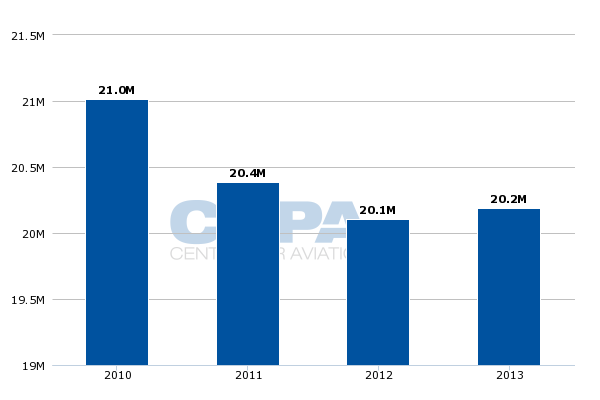 Mr Pedersen declared that the Seattle-Salt Lake City pairing was performing quite well for Alaska. Data from US Bureau of Transportation Statistics show that Alaska’s load factors in Salt Lake City were 72% in May-2013, 87% in Jun-2013, 90% in Jul-2013 and 91% in Aug-2013. Alaska’s CFO concluded the route “matured quite nicely, so we thought there was more to do [from Salt Lake City].

Alaska’s strategy is to grow from Salt Lake City into markets where it has point of sale strength, Mr Pedersen explained. Most of the new markets are on the US west coast, where Alaska has ample brand recognition. It is the largest carrier based on seats deployed from its Portland hub (44% for the week of 24-Mar-2014 to 30-Mar-2014), and also has widespread brand recognition in San Diego, Los Angeles, San Jose, Boise, Las Vegas and San Francisco.

It will be a key test for Alaska to see if it can gain traction in those markets, especially on the more populated routes.

Even as Seattle suffers from some overcapacity during 2014, Alaska is growing transcontinental routes from its largest hub. It plans to introduce flights to Delta’s hub in Detroit, and also in two uncontested markets – New Orleans and Tampa, Florida.

Delta readies to pull its code off several Alaska flights: the tank vs the (neutral) tiger

While Delta’s sheer size advantage over Alaska triggers numerous questions over Alaska’s ability to defend itself against Delta’s encroachment, Alaska argues that its smaller size gives it a certain nimbleness its larger competitors do not enjoy.

As the nature of its relationship with Delta changes, Alaska is not surprisingly stressing the big picture, and touting its “swiss neutrality” approach to forging a broad swathe of partnerships, which have ebbed and flowed over the years and “may continue to ebb and flow in the future,” said Mr Pedersen.

Both airlines are effectively "neutral" though; it's just that one is a lot bigger and more able to walk alone down dark streets.

The smaller Swiss have managed to retain their neutrality over the centuries by a combination of preparedness to defend their patch and the ability to compromise with larger would-be enemies. That combination is a complex one and if that is the route it wishes to continue to follow Alaska may need to delve a little more deeply into Switzerland's secrets of success.

Still, as previously reported by CAPA, Delta remains Alaska’s largest US domestic codeshare partner by revenue, representing about 51% of Alaska’s codesharing revenue for 9M2013. There is a mutual interest here that continues to hold attractions for both.

Alaska is no doubt bracing for a reduction in that total during 2014 as Delta, beginning in Jun-2014, is removing its code on Alaska’s flights from Seattle to Las Vegas, Los Angeles, San Diego, San Francisco, San Jose and Vancouver. In Jul-2014 Delta is removing its code from Alaska’s service from Seattle to Anchorage and Houston followed by Seattle-Phoenix in Dec-2014.

Mr Pedersen stressed there is a minimum number of codesharing routes included in Alaska’s agreement with Delta, and “we’re doing far beyond that”. However, he did concede that would contract as the competition intensifies in Seattle.

Alaska also admits that it will face unit revenue pressure from the added capacity in its markets after largely underperforming the industry during CY2013. During 2013 the company’s passenger unit revenues fell 1.5%. But Mr Pedersen believes the airline can combat some of the unit revenue pressure through changes Alaska made during 2013 to baggage fees (that should generate USD50 million in revenue) and the addition of seats to its Boeing 737 narrowbodies.

Alaska also sees some relief in competitive capacity during 3Q2014 as it levels off to 6% growth, which perhaps should help to ease some of the pressure Alaska will feel during CY2014.

However, Mr Pedersen candidly admitted that Alaska would continue to underperform the industry with respect to unit revenue “as long as we have significant capacity on top of us. But that is not to say we won’t do well in absolute terms”.

Is it time for Alaska and Delta to end their partnership? When does the tipping point occur?

There is no doubt the increased competition from Delta creates a significant overhang for Alaska during 2014. But the carrier appears to be taking reasonable action to combat the competitive onslaught created by Delta’s new ambitions for Seattle.

But at some point Delta – and more especially – Alaska will need to assess whether their continued relationship is creating value for both parties. Delta has made it clear that it now wants to capture a majority of the revenue it generates in Seattle for itself.

A clean break at this point would give Alaska and its shareholders some clarity into the future; a decisive move now could allow Alaska possibly to forge greater ties with American, who could likely benefit from an expanded relationship.

Perhaps a clean break in the relationship sooner rather than later would also give Alaska a reprieve from the continuous onslaught of questions regarding its future tie-up with Delta – and the negative pressure that uncertainty carries. But it will be a big swallow to forgo the revenue Alaska enjoys from the partnership, as well as effectively making a declaration of war on its bigger partner.

In the end, the tank will go wherever it wants. In face of that potential onslaught, the tiger might be better advised to head for the jungle and look for other friends there. There comes a time when neutrality just starts to look too fragile.