Alaska Air Group (+2.5%) CEO, Bill Ayer stated he is optimistic about the Group’s future, after being one of few US carriers to report a profit in 3Q2009. The group attributes its resilience amid the global financial downturn to Alaska Airlines and Horizon Air’s smaller sizes, compared to competitors, allowing it to adapt faster.

CFO, Glenn Johnson stated Alaska Airlines’ capacity is expected to grow 1% to 2% in 2010, while Horizon Air’s is expected to remain flat. Mr Ayers stated, “we are growing markets, but as we grow those new markets we're rightsizing capacity in other markets. We do want to be positioned to respond quickly when we see a little more strength in the economy”. The carrier also stated has seen a strong increase in Nov-2009 (+2.5%) and Dec-2009 (+3.5%) bookings, allowing it to increase fares.

LAN Airlines (+0.5%) was upgraded from ‘Underperform’ to ‘Neutral’ by Credit Suisse during trading, due to a better outlook for its cargo operations in 2010. The carrier’s price target was also increased by the analysts from USD13.00 to USD16.00. Credit Suisse expects the carrier to report EPS of USD0.57 in 2009 and USD0.78 in 2010.

FedEx (+1.1%) also saw an increase in stock price, after Morgan Stanley raised its estimates for the freight carrier through to 2012. The analysts expect FedEx to benefit from a recovery in GDP, higher demand in Asia and a weaker US Dollar. Morgan Stanley assigned an ‘Equal-weight’ rating for the carrier.

Internationally, TAM reported a 0.3 ppt increase in load factor for the month, to 78.1%. International traffic rose 15.2%, while capacity was increased 15.7%. Although the carrier witnessed a drop in domestic market share, international market share rose 3 ppts, to 86.8%. TAM stated that as the international market presented a more rational and stronger recovery during Oct-2009, it estimated a growth of 10% to 15% in yield, compared to Sep-2009. 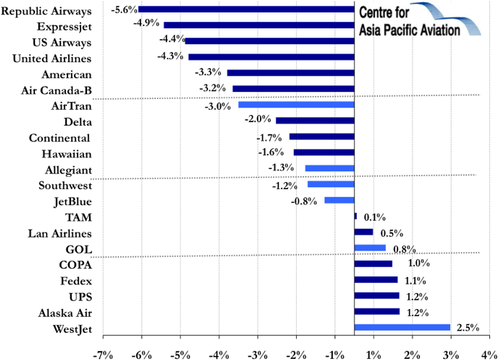