The Wall St Casino turned on airline stocks yesterday as the Dow Jones index was again battered, losing 4.1% on the day across the board.

The sensitivity of the airline sector was emphasised again, as the major US airlines lost over four times that. Alaskan lost a whopping 18.6%, American Airlines was close behind, down 18.1% and US Airways (-16.9%), United and Continental (-13.3%, Delta (-11.9%) were not far behind.

Of the US carriers, Southwest fared least badly, down a mere 4.0%.

In South America, Gol lost 10.8%, perhaps in sympathy, despite recently performing strongly after Goldman Sachs increased its recommendation to a "buy", on the basis of Gol's strong outlook. 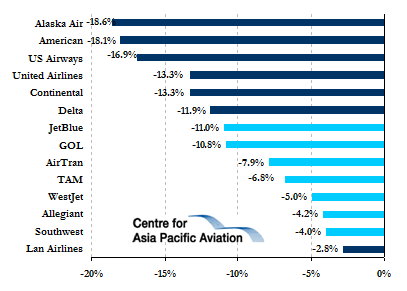