AirTran’s shares fell 2.4% yesterday, despite expectations that the carrier will post an adjusted profit in 4Q2009, to be one of only a few of the major airlines to be profitable in the period and in every quarter in 2009. The carrier, in Dec-2009, stated it was expecting a record profit in 2009.

Meanwhile, Standard & Poor's upgraded its rating of AirTran's parent company from “buy" to  "hold", adding, "for 2010, we see 9% higher revenues on stronger passenger demand and higher pricing". However, it reduced its 2010 earnings per share estimate, citing the recent rise in oil prices, but added that AirTran shares gave upside potential, as the shares generally trade at a discount to its peers.

JetBlue upgraded by Moody’s on improved liquidity and profitability

JetBlue’s shares slipped 2.3% yesterday, despite Moody’s Investors Service upgrading the carrier’s outlook from ‘stable’ to ‘positive’ and raising JetBlue's corporate family and probability of default ratings by one notch to "Caa1." It also raised ratings on several other layers of JetBlue debt.

Moody's cited JetBlue's "significantly improved liquidity" and its ability to remain profitable during 2009 as the reason behind the upgrade for the airline. The carrier is scheduled to release its FY2009 and 4Q2009 financial results on 28-Jan-2010.

Meanwhile, shares in Europe’s airlines generally gained yesterday, as Morgan Stanley upgraded its sector stance from “cautious” to “attractive”.  The broker stated it expects passenger volumes to “rebound 3-4% for major carriers and 10% for LCCs”, adding, “we expect the area of surprise will be improvement in yields, where comparables should remain easy into the summer."

Morgan Stanley also raised its target price or easyJet from GBP4.60 to GBP4.80 and for Ryanair from EUR4.2 to EUR4.4.

Skymark Airlines’ shares slumped 6.2%, despite reports that the carrier will report a parent-only operating profit of approximately JPY2.3 billion (USD26 million) for the Apr-2009 to Dec-2009 period, compared to a JPY3.7 billion (USD41 million) loss in the previous corresponding period. The carrier reportedly handled 789,000 passengers in the three months to Dec-2009, approximately an 8% year-on-year increase.

Elsewhere, 1time Holdings’ shares soared 10.6%, while shares in newly-listed Tiger Airways were down 4.5%. 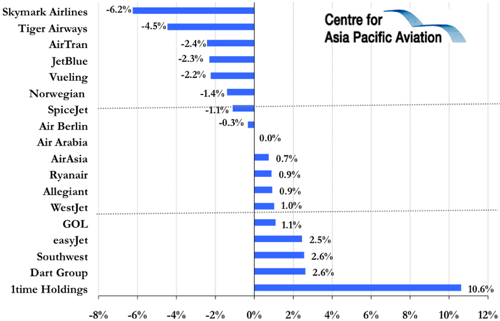