IAG's interest in acquiring Norwegian Air Shuttle once again focuses attention on the process of consolidation in the European aviation sector. Although often headline-grabbing, this is a process that has not led to any significant change in market structure in recent years.

The wave of mega-mergers in Europe started with Air France and KLM in 2004, included Lufthansa's acquisitions of SWISS and Austrian, and ended with the 2011 combination of British Airways and Iberia to form IAG. Since then, consolidation has ambled along at a slow pace, led by mergers of smaller scale and market exits.

An acquisition of Norwegian would add 3% to IAG's 9% share and take it just ahead of Lufthansa Group as Europe's number one. However, it would leave it well short of American Airlines' market-leading 19% share in North America and still leave Europe in a fragmented state.

Only mergers between Europe's biggest groups could match the seat share of North America's leading players.

Concentration in Europe has changed little in recent years

There has been very little consolidation in Europe in recent years. In spite of the disappearance of airlines such as Transaero, Monarch, airberlin and Estonian Air, market concentration changed little between summer 2015 and summer 2018.

Transaero and Monarch each had less than 1% of total seats in Europe and Estonian Air only a tenth of this. Air Berlin Group was more significant, with approximately 3% of seats, but much of this capacity is now flying with the Lufthansa Group and easyJet.

There are different ways of looking at concentration and there have been slightly greater increases in the seat share held by the top 10, top seven, top five and top three, but only by 2ppts or so in each case.

The grouping that has experienced the biggest growth in its collective market share is the top seven, with an increase of 2.2 ppts from 53.3% in summer 2015 to 55.5% this summer.

In summer 2015 the SAS and Air Berlin Groups were only just outside the top seven by seat share, each with approximately 3% of seats and just behind seventh ranked Aeroflot Group, which also had 3%.

Since then, a more distinct top seven has emerged. In summer 2018 there is a bigger gap between Aeroflot in seventh place, with close to 4% of seats, and Norwegian, now in eighth place with a 3% share.

Meanwhile, Air Berlin Group has disappeared and SAS has slipped to ninth place. 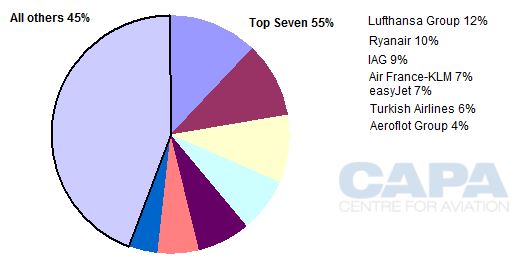 Europe's aviation market is much less concentrated than North America's

It is informative to compare Europe's airline market structure with that of North America, which is the world's most concentrated aviation region.

As in Europe, there is also a distinct top seven in North America, with a gap between number seven JetBlue's 4% seat share and number eight ranked Spirit Airlines' share of just less than 3%.

However, although the seat shares of the seventh and eighth ranked North American groups closely match the equivalent groups in Europe, the North American top seven collectively have an 81.8% share, compared with the European top seven's 55.5%.

Within the top seven in each continent, only the number seven airline groups have a similar seat share of approximately 4% in each region.

However, it is among the top four in each region that North American airline groups have a much higher seat share. No European group in the top seven has a seat share as high as any North American top four group.

Moreover, each of the North American top four is bigger by seat numbers than its European counterpart. For example, American Airlines has 30% more seats than Lufthansa Group this summer, while United has 65% more seats than Air France-KLM.

If IAG were to acquire Norwegian and its 3% share of seats in Europe, this would just take the expanded IAG to the top of the European ranking by seats, with a share of 12% (to be more precise, it would be 12.24% – very slightly ahead of Lufthansa Group's 12.17%).

This would be one of the biggest mergers/acquisitions in Europe for several years.

When IAG acquired Vueling in 2013 the Spanish LCC had approximately 2% of seats to/from/within Europe, while its 2015 acquisition of Aer Lingus brought with it a share of 1%. Lufthansa's 2018 full consolidation of Brussels Airlines took on the Belgian airline's share of less than 1%.

IAG has been the most active force in European airline consolidation since the wave of mega-mergers. Moreover, it has showed some imagination with its acquisitions, in terms of nationality and business model.

However, as with its Vueling and Aer Lingus purchases, an IAG/Norwegian deal would not really make a huge difference to overall market concentration.

The 18% share held by Delta could be created in Europe by the merger of Lufthansa Group and Turkish Airlines. Southwest's 17% share would be matched by a combination of Ryanair with easyJet and almost matched by merging Lufthansa Group with Aeroflot or IAG with Air France-KLM.

To achieve a European group with a similar seat share to United's 15% would require the merger of Ryanair with Aeroflot, IAG with Turkish Airlines, or Air France-KLM with easyJet, (or Lufthansa Group with ninth placed SAS).

European consolidation is slow. It may be time to think the unthinkable

There could arguably be some cold industrial logic behind many of these hypothetical combinations, but the heat of opposition on political, labour relations and cultural grounds makes them virtually unthinkable in most of the above examples (although Lufthansa/SAS may be more thinkable).

There could also be concerns about such mega-deals on competition grounds. Although such big market shares exist in North America as a result of mergers in that market, this is no guarantee of acceptance by regulators in Europe.

This is an ongoing, but slow, process in Europe and will likely be driven as much, or more, by market exits as by significant M&A activity.

However, there are some strong, well capitalised groups at the top end of the market that could afford to stimulate this process with big acquisitions. The time may be ripening for thinking the unthinkable in European airline consolidation.