Unpredictable economies and delays to new aircraft programmes have turned fleet management into an art rather than a science according to IATA, and caused major headaches for airlines.

The global financial crisis and the ensuing collapse in passenger traffic and yields sent aircraft utilisation into a decline that it is still yet to recover from, particularly for widebodies. The wave of aircraft retirements seen in late 2008 and early 2009 has now petered out, with the numbers of parked aircraft returning into service balanced by retirement levels.

Through the financial crisis major manufacturers made only minor adjustments to their production schedules. Airbus and Boeing delivered a combined 981 aircraft between them in 2009, a new record, although Bombardier and Embraer did pull back on production. As a result, global fleet capacity expanded 4% last-year, with around 100 aircraft per month added to the global airline fleet. At the same time, global airline passenger capacity was cut by 2.1%, while freight capacity dropped by 8.3%.

Global aircraft deliveries are expected to be only slightly lower this year, and will potentially climb again in 2011. Airbus has already announcing plans to increase A320 family production from 34 to 36 aircraft per month from Dec-2010 and Boeing considering increasing B737 and B777 production.

However, instead of record deliveries, it is the delays to several major aircraft programmes, particularly the A380 and the highly successful B787, that has forced airlines to face up to the major challenge of balancing their route development and cost objectives while stuck operating older aircraft. The delays, and production and development difficulties, have also cost the manufacturers billion of dollars/euros.

Of the two programmes, the A380 has been less successful commercially, but has gotten off more lightly over the past two years. Although Airbus continues to struggle with manufacturing the aircraft, and expects to deliver only 20 this year, carriers have preferred to defer A380 deliveries, rather than cancel orders.

Boeing has seen a large number of cancellations, with 83 disappearing from order books last year. Air Berlin joined that list this month, reducing its order from 25 to 15 as it rethinks its long-haul strategy.

As Air Berlin CFO, Ulf Huettmeyer, commented in Aug-2009, “its no fun anymore”. Air India's Chairman and Managing Director, Mr Arvind Jadhav, yesterday linked Boeing's inability to deliver the B787 as one of the factors behind the carrier’s poor financial performance. Routes to the Gulf, and others such as Bangkok-Shanghai, Bangkok-Tokyo cannot be operated profitably without the new aircraft.

Better than two years of delays and the effect of the global downturn has meant airlines have had to adjust their fleet plans and network objectives to face the new reality, and it is not a situation that they wish to see repeated with future aircraft programmes.

Emirates noted this month, with some concern, that Airbus has use some of its engineering and timetable margins for its upcoming A350 XWB. Airbus admitted recently that it has “used up some of the previous buffers in the development of the A350 programme, but has kept the date of the entry into service unchanged. In 2008, two years into the programme, Airbus lifted the maximum take-off weights for the A350 XWB family by 3 tonnes. Reports circulated that the aircraft was approximately 2 tonnes above the company’s targets, but work was ongoing to remedy this. Airbus maintains that the aircraft is on track to meet its performance and delivery targets.

The aircraft does have the luxury of a longer development and testing allowance than either the A380 or B787 before it, with approximately seven and a half years between programme launch and first delivery. The aircraft is still two years away from testing and it will be at least three years before the A350 XWB enters service to customers. However, with 505 firm orders, many carriers have build their network development plans around the new twin-jet, so a delay could have similar repercussions for airlines to those of the B787. 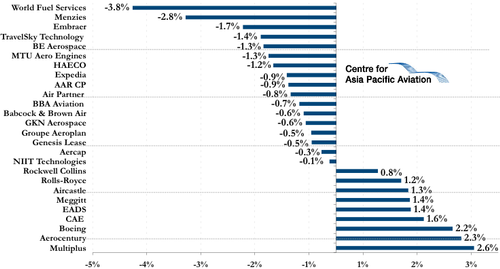