Air Calédonie International (Aircalin), the national carrier of New Caledonia, plans to develop its core Australian and New Zealand routes as the carrier enters into a development phase that could include the acquisition of additional narrowbody Airbus aircraft.

The carrier is expecting modest growth of about 3% annually for the next few years supported by a new national tourism strategy targeting wealthier tourists, in particular from Australia. The country is looking to build a viable tourism industry as a diversification to its dominant mining sector.

But the archipelago has suffered a steady decline in tourist visitors from its key markets, Australia, Japan and New Zealand, in recent years which will make growth at Aircalin a challenge.

Aircalin CEO Didier Tappero reportedly stated in May-2013 that Aircalin will focus on developing its existing market in Australia and New Zealand. “For now, we are a small company and we are looking at a development stage,” he told Le Journal de l'Aviation and reportedly did not rule out ordering A320s or A321s.

Commercial director William Le Grand reportedly stated that Aircalin transported 370,000 passengers in 2011 and 5,200 tonnes of cargo and mail, achieving a turnover of EUR137.4 million (USD182.3 million). Passenger numbers grew about 10,000 in 2012. “We expect modest growth of around 3% of the overall traffic PAX in 2013 due to the stagnation of the market,” Mr Le Grand said.

New Caledonia is a special collectivity of France in the Melanesia sub region. The archipelago includes the main island of Grande Terre, the Loyalty Islands, the Chesterfield Islands, the Belep archipelago, the Isle of Pines and has population of about 246,000 people.

Aircalin is 72% owned by French bank Caisse d'Epargne Group which is a subsidiary of Groupe BPCE and 27% owned by the New Caledonian Government, while staff own the remaining 1% of the group.

Aircalin operates a route network to 11 Asia-Pacific destinations from its hub at the country’s only international airport, La Tontouta International Airport located 52km from the territory’s capital, Noumea. Domestic subsidiary Air Caledonie operates a network of 10 destinations with an ATR42 and two ATR72s from its hub at Noumea Magenta Airport located in the centre of the city. 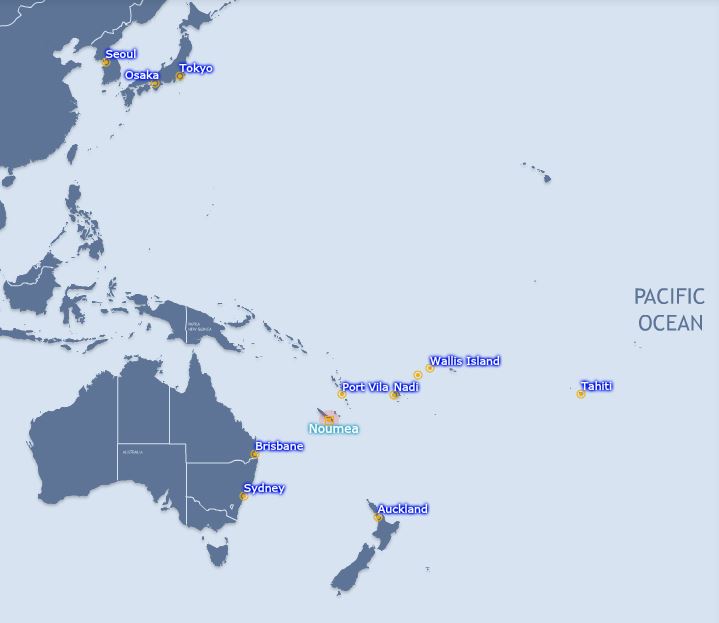 Aircalin deploys about 45% of its capacity to Northeast Asia using 266-seat, two class A330-200 equipment. Japan is served with about 3,700 one-way seats per week, accounting for about 35% of capacity deployed, while Seoul is served twice weekly with about 1,100 seats.

Aircalin refitted its fleet of two A330-200s at the end of 2012 with 24 lie-flat business class seats and 242 new economy class seats with on demand IFE. The cabins of the 10-year old aircraft have also been given a new colour scheme. The carrier has also adopted a new livery and uniforms for staff. 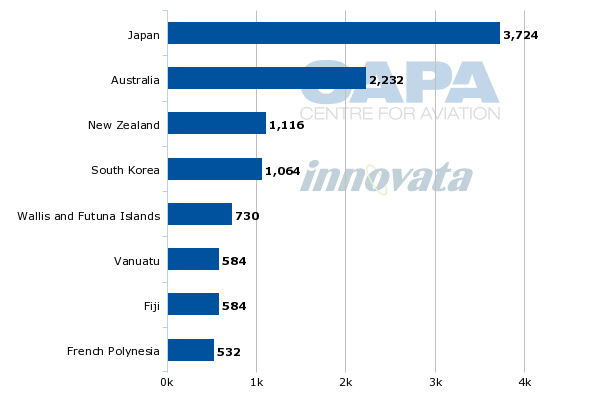 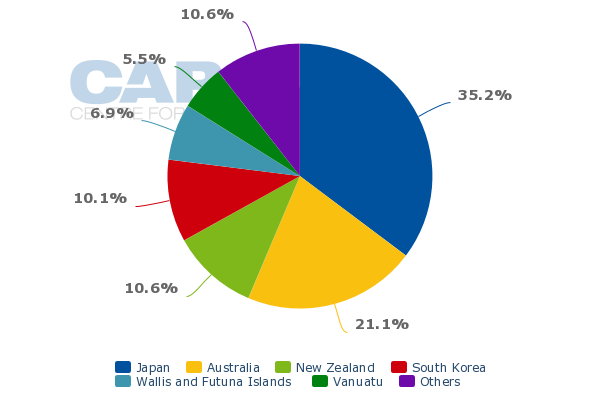 Australia accounts for 21% of capacity deployed including four weekly frequencies to Sydney using a mix of A320 and A330-200 aircraft and twice weekly to Brisbane with 146-seat, two class A320s. Aircalin and Qantas codeshare on their respective services between Noumea and Australia allowing a combined daily frequency between Sydney and Noumea of which Qantas operates three times weekly. The two carriers also codeshare on Brisbane-Noumea with Aircalin operating two of the three weekly frequencies.

Aircalin has a similar arrangement with Air New Zealand between Auckland and Noumea where Aircalin operates three of the five frequencies per week and Air New Zealand the remaining two. But there has been little capacity growth by any of the four international carriers serving New Caledonia in the past two years. 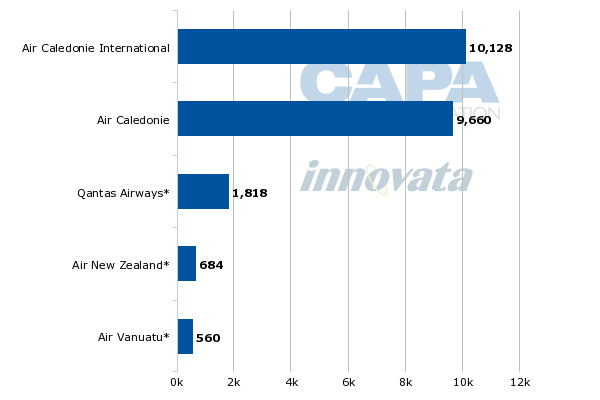 New Caledonia has made the development of a strong and sustainable tourism industry a priority with a particular focus on the Australian market to diversify the economy’s reliance on mining. The country has about 25% of the world’s known nickel reserves and substantial investment in the industry, combined with a recovery in nickel prices has boosted New Caledonia’s economic outlook for the next few years. Real GDP grew by 3.2% in 2011. In addition France provides substantial financial support, equating to about 15% of GDP.

Exports accounted for an estimated USD970 million in 2012, consisting mainly of ferronickels, nickel ore and fish, according to the CIA World Hand Book. New Caledonia’s biggest export partners are Japan, France, South Korea, China and Australia. Imports however, totalled more than USD3.3 billion in 2010, including machinery, fuels and food.

The New Caledonia Tourism Board pitches the archipelago’s Pacific island winter getaway appeal just a few hours’ flight time from Australia and New Zealand, with the added benefit of experiencing French culture without the need to travel to Europe.

New Caledonia has adopted a strategy to distinguish itself from mass tourism destinations such as Fiji, Bali and Thailand in favour of developing high end niche eco-type tourism properties to attract more higher value tourists, in particular from Australia.

But tourists from all three key markets, Australia, Japan and New Zealand are in decline

The number of Australian residents leaving for a short stay in New Caledonia has been reducing since the last peak of 18,100 departures in the Jun-2008 year to 15,500 in the Jun-2013 year and are now back to 2005 levels, according to Australian Bureau of Statistics data.

Likewise, the number of New Zealand residents leaving for a short trip to New Caledonia has also tailed off from nearly 7,700 in the Jun-2011 year to 7,000 in the Jun-2013 year.

New Caledonia is losing visitors to Vanuatu and French Polynesia

New Caledonia has been losing business to Vanuatu about 500km to the north and French Polynesia, both of which have their own French connections. Vanuatu attracted 66,400 Australian visitors in the year to Jun-2013, up nearly 11% in the previous three years.

The number of New Zealand residents headed for Vanuatu has also increased by more than 33% to about 14,500 in the three years to Jun-2013 as holidaymakers seek out alternatives to Fiji. While numbers to Fiji have stagnated it remains by far the most popular island destination, attracting nearly 104,000 New Zealand visitors and more than 323,000 Australians in the year to Jun-2013.

New Caledonia has been popular for Japanese wedding parties, apparently at least in part driven by a best-selling Japanese romantic novel published 20 years ago, 'The Closest Island to Paradise’ which is set in New Caledonia.

However, New Caledonia lost its position as preferred wedding destination in 2011 and the number of Japanese tourist arrivals has steadily decreased since 2006, according to Euromonitor International. 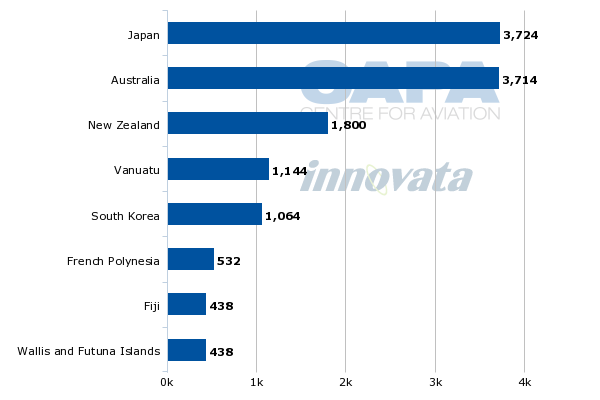 China would seem like a logical market for New Caledonia to target under its new high value visitor strategy given the Chinese penchant for high end French brands. Fiji has seen a strong rise in Chinese tourism, no doubt in part due to the presence of the only luxury Shangri-La resort in the South Pacific islands and the preferred hotel chain among wealthy Chinese tourists. Chinese inbound tourism to Fiji has gone from a standing start to 24,389 in just three years, providing a steady stream of about 2,000 visitors each month.

With France being the most popular destination among wealthy Chinese travellers according to the Hurun Report Chinese Luxury Consumer Survey 2013, there is an opportunity for New Caledonia, French Polynesia and Vanuatu to leverage the French connection. But the three countries will first need to develop their high-end tourism offerings including accommodation to meet the expectations of high spending Chinese.

But with the number of outbound Chinese tourists reaching 83 million in 2012 and forecast to top 94 million in 2013, this is a market that New Caledonia and other under-developed Pacific Island nations would do well to target.