Airbus’ latest 20-year Global Market Forecast has continued the trend of steady annual upward revisions to the long-term outlook. The manufacturer has revised its growth forecast for 2010 to 2029 from 4.7% to 4.8%, and consequently upped its forecast to almost 26,000 passenger and freighter aircraft, representing an increase of around 900 units from last year's forecast. The value of the market outlook has also been raised from USD3.1 to USD3.2 trillion. 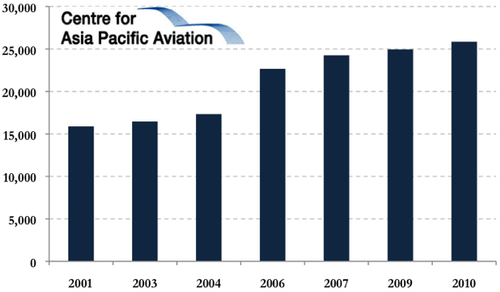 In all, Airbus forecasts that the global commercial aircraft fleet will more than double, from 14,000 at present to 29,000 aircraft by 2029. Expanding markets in Asia, Africa, the Middle East and Latin America are expected to drive passenger growth worldwide. 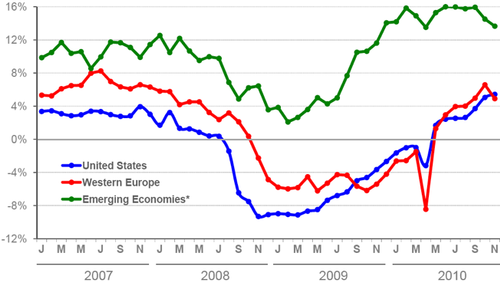 The increase in the forecast primarily reflects growth in the narrowbody segment, which the manufacturer expects to benefit from increasing liberalisation, accelerating demand in the Asia Pacific and the strength of the LCC market in general. Airbus now projects narrowbody sales of 17,870 aircraft (worth USD1,274 billion), up from 16,980 units in last year’s forecast. The segment is expected to account for 69% of aircraft sales and 40% by value.

Airbus has a new entrant in the narrowbody segment, launching its 'A320neo' earlier this month. The manufacturer projects it could sell around 4,000 A320neos over the next 15 years, before it develops a full replacement aircraft. Boeing is yet to announce its response

The narrowbody market will become more fragmented as the A320/B737NG pairing that has dominated for the last 15 years is joined by fresh rivals. Bombardier is offering its new 100-150 seat CSeries, due to enter service in 2013. China’s COMAC is developing the C919  - in partnership with Western firms and is due for service in 2016. Russia is hoping to revitalise its moribund civil aircraft industry with Irkut’s new MS-21 narrowbody family, also due in service around 2016.

Even with the upward revision, Airbus' outlook for the narrowbody is not as optimistic as Boeing, which sees sales of close to 21,200 aircraft over the next 20 years.

Despite slow sales of the A380 and the B747-8, Airbus has kept its Very Large Aircraft forecast at over 1700 aircraft, almost double Boeing’s projections for the same market. In fact, Airbus has raised it overall VLA outlook from 1730 to 1740 aircraft, reaffirming its belief in the potential of 450+ seat aircraft. Airbus has sold 32 A380s this year, all to Emirates, and signed an MoU with Japanese LCC Skymark for four more. Boeing has sold just a single B747-8 this year, to a private customer.

The overall outlook for the highly profitable twine-engine twin-aisle market has remained virtually unchanged at 6240 units, compared to 6250 in the 2009 GMF. These aircraft represent just 24% of total aircraft demand by numbers, but 42% of demand by value. Smaller widebodies (250-300 seats such as the A330, A350 XWB and B787 families) will account for the majority of orders (4,330 aircraft). Larger long range aircraft, such as the B777 family and larger variants of the A350, are forecast to account for another 1910 aircraft. Aibus has increased its outlook for smaller widebodies by 100 aircraft and cut the outlook for larger widebodies by 90 units.

Airbus has raised its overall passenger traffic forecast and its aircraft demand forecast only marginally, but the bump shows that the company is confident about the future of the air travel market and its own position. Orders keep rolling in (388 this year, with a month to go) and with the A320neo announcement, the company’s narrowbody strategy for the next 15 years is now set. Airbus is incrementally sorting through the A380 manufacturing bottlenecks, delivering 19 this year (one short of the original target) and promising at least two aircraft per month in 2011, even with the Rolls-Royce engine issues. While the A350 XWB program is creating pressures (and it remains to be seen whether the manufacturer can deliver that aircraft on time), Airbus has every reason to believe the aircraft will ultimately be a success, given the strong early response from airlines.