Airbus order book takes a step backwards in September, Embraer on target for 200 deliveries in 2009

Airbus’ order backlog retreated (very slightly) in Sep-2009, with the manufacturer receiving two new orders during the month, but booked four aircraft cancellations. As a result, net orders for the year have shrunk from 125 to 123, while gross orders stand at 149, half the manufacturer’s target of 300 for the full year.

Boeing is actually ahead of Airbus in terms of gross orders, having booked 170 orders this year. However, the US manufacturer has also suffered more heavily from order cancellations, with 91 for the year so far, compared to 26 at Airbus.

Airbus delivered 38 aircraft in Sep-2009, 28 narrowbodies and ten widebodies, bringing the total for the first nine months of the year to 358. Boeing has matched this output level, delivering 359 over the first three quarters of the year. Both Airbus and Boeing are expected to deliver 480 or more aircraft this year - establishing a new combined delivery record. 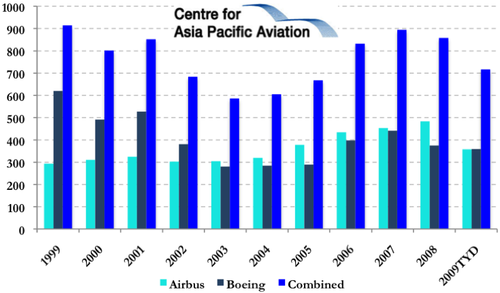 Shares in EADS, parent of Airbus, rose 2.3% in trading yesterday, while Boeing lost 1.0%.

Embraer meanwhile announced it delivered 29 commercial aircraft in 3Q2009 (eight less than in 3Q2008), as well as 28 other aircraft (including 22 Phenom 100 light jets), taking its total deliveries for the year to Sep-2009 to 153. Commercial aircraft deliveries in the same period have been 93, including 50 E-190s.

The Brazilian manufacturer slowed production rates earlier this year, in response to slowing market conditions in the commercial aircraft segment.

Embraer’s commercial aircraft firm order backlog now stands at 306, 95% of which are E170/190 family aircraft. The value of Embraer’s firm order backlog has dropped again, down 6% since Jun-2009 to USD18.6 billion, after stabilising earlier in the year.

Embraer lost 3.0% in trading on Wednesday.