Aircraft lessors were down across the board yesterday, as markets in Europe and North America fell by 2-3% and oil prices were down by almost 4% to below USD67 per barrel. Parts suppliers and airframe manufacturers were also affected, with EADS, Boeing and Embraer all down by more than 3%, while MTU Aero Engines fell 4.4% and Rolls-Royce dropped 1.1%.

Aircastle was the most heavily affected of the lessors yesterday, falling 8.5%. The company filed a USD1 billion mixed securities shelf on Friday. Genesis Lease was down 6.9%. After surging by 12.6% on Friday, Babcock and Brown Air fell 6.4% yesterday. Aercap was the best performing of its peer group, after signing USD2.1 billion in agreements with Virgin Atlantic Airways, including sale-and-lease-back of six A330s and lease of four A330s. Its share price was down 2.1%. 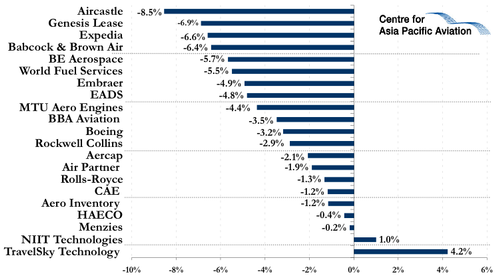