After the strong performances by aviation supplier shares on Monday, results were more mixed yesterday. Airbus parent, EADS, rose 2.3% yesterday. CEO, Thomas Enders, stated the manufacturer was not looking for any major orders at this month’s Paris Air Show and that hitting its target of 300 aircraft orders would now be a “dream result”. The manufacturer expects to meet its 2009 delivery targets, although it “lacks visibility” on 2010, and could slow down aircraft deliveries beyond the end of this year beyond the reductions already planned.

Major competitor, Boeing, was up 3.1%, after a day of mixed news from its military businesses. The US Congress approved funding for more Boeing C-17 transports under the 2009 supplemental appropriations bill, ending speculation that Boeing could be forced to close the production line.

However, the US Court of Appeals has ruled against a second appeal by Boeing and General Dynamics over the cancellation of a naval aircraft programme, ordering them to repay approximately USD1.4 billion each. Boeing has declared its intention to again appeal the ruling. The US Air Force also cancelled a USD712 million helicopter programme, after protests from competitors.

Embraer fell 3.3% yesterday, after analyst commentary that it may not achieve its target of 242 aircraft orders this year. The Brazilian manufacturer has received orders for 59 aircraft for the year to date, including an order for 20 regional jets for an Argentine carrier, funded by the Brazilian Government. 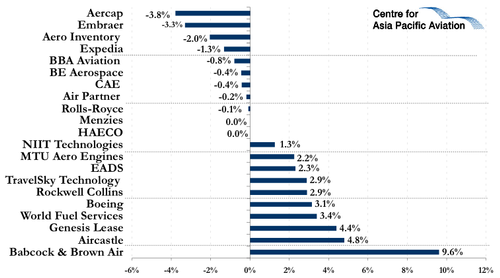