However, it was not all positive news, with reports that Dubai Aerospace Enterprise has cancelled a USD3 billion order with Airbus, reducing its order for 100 aircraft by 25%, involving 18 A320s and seven A350-900s. DAE has now cancelled a total of 50 aircraft with Airbus and Boeing, valued at more than USD8 billion. The company, last week, cancelled orders for 15 B787s and 10 B777s.  Airbus has now had 41 order cancellations in 2010. AirOne also cancelled two aircraft in Jul-2010, bringing Airbus cancellations for Jul-2010 to 27.

Shares in Airbus parent, EADS, gained 3.0% on Friday, while shares in Boeing slipped 0.8%. Also slipping on Friday was Rolls Royce and BE Aerospace (by 1.0% and 0.9% respectively), while on the other end of the spectrum, GKN Aerospace and Meggitt ended the week stronger, with gains of 4.2% and 4.1%, respectively, after releasing their financial results for the Jun-2010 period during the week. 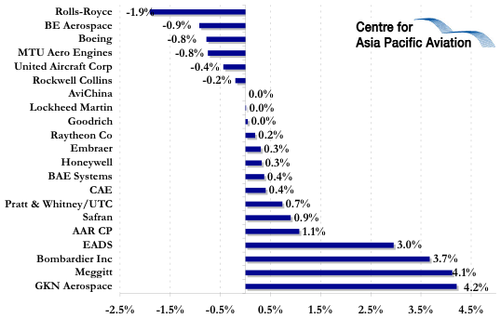 Meanwhile, ILFC reported a 6.5% reduction in revenues in the three months to Jun-2010, to USD1.2 billion, while costs increased 10.8% (to USD1.1 billion), resulting in double-digit reductions in profitability. Profit before tax and net profits slumped by 52% and 53%, respectively, to USD174 million and USD111 million in the three month period.

Meanwhile, Willis Lease Finance Corporation, a lessor of commercial jet engines, also reported weaker revenues, increased costs and a slump in profitable in the three and six months to Jun-2010.

Will Lease reported a 1.8% reduction in revenue in the three months to Jun-2010, with a 17% increase in total costs to USD30.1 million. This resulted in a  65% increase in operating profits to USD2.7 million, with a 62% reduction in net profitability to USD1.9 million.

The company commented: “While overall conditions in the aviation industry are improving and demand for leased engines is on the rise, we are still facing an oversupply of certain types of engines in the market as well as pressure on lease rates across the board. However, since the beginning of June we have experienced a significant increase in the number of requests for leased engines compared to earlier in the year, and new lease activity has increased noticeably. We believe that the oversupply of spares is gradually being absorbed by greater demand and that pricing power is beginning to shift back to the lessors”.

Shares in the company increased 1.6% on Friday, while Multiplus and Air Partner reported strong share price gains of 5.4% and 6.0% on Friday. 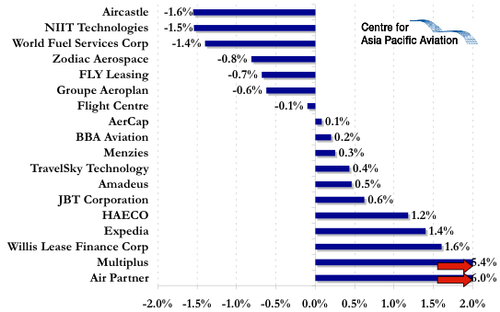