Air Berlin CFO, Ulf Huettmeyer, informed the German newspaper Der Tagesspeigel that the carrier's 1Q2011 results have been hurt by the unrest in North Africa. The carrier is maintaining its full-year financial target for the time being, and is monitoring the affect the unrest in the region is having.

airberlin shares finished 2.3% lower on Friday, the worst performance for LCC shares in the day's trading.

Kuwaiti LCC Jazeera Airways and Travelport signed (17-Apr-2011) a full content agreement that will provide Galileo-connected travel agents in Kuwait with access to fares not available through any other global distribution system (GDS) channel.

Wizz Air announced it is cutting capacity by 26% at Cluj-Napoca Airport. The carrier will redeploy one A320 to Tirgu Mures Transylvania Airport, opening the base earlier than originally intended. Wizz Air stated the decision follows the airline's recent dispute with Cluj Airport, which reportedly plans to increase charges for the carrier by 50%. Cluj airport management said Wizz Air's plan to move the capacity was unjustified, and the airport treats all airlines equally. 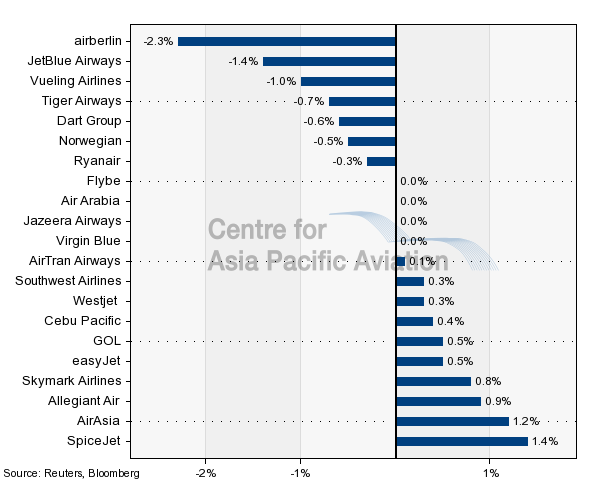