airBaltic: the hybrid LCC punches above its weight; back to growth and positive EBIT in 2016

For Latvia's national airline, 2016 was a pivotal year. Riga-based airBaltic completed a multi year restructuring programme, increased its passenger numbers for the first time in five years, secured a capital increase and a private investor, and became the launch customer for the Bombardier CS300. On 28-Mar-2016 it further celebrated its successes by announcing a return to positive EBIT, alongside a net profit, for last year.

It has achieved its turnaround in the face of strong competition from foreign LCCs, justifying its positioning as a "hybrid LCC". Data provided to CAPA confirm that its unit cost level is also broadly consistent with the LCC tag. It is now seeking further investment from a strategic investor – preferably another airline. It also faces a decision about the replacement of its Dash 8 turboprop fleet.

AirBaltic CEO Martin Gauss told CAPA that the airline plans for passenger growth to accelerate from 12% in the past year to 16% in 2017, taking traffic levels back above 3 million passengers. For an airline based in a country inhabited by only 2 million people, this suggests that airBaltic has been making some judicious network decisions.

airBaltic returned to positive EBIT in 2016

In 2016 airBaltic returned to growth and posted positive results at both the EBIT and net income level. Its EBIT turned around from a loss of EUR9.6 million in 2015 to a profit of EUR3.4 million in 2016.

Its net income declined from EUR19.5 million in 2015 to EUR1.2 million in 2016, but the year-on-year comparison is distorted by a significant positive one off in 2015, which related to legal settlements in litigation processes and accounted for the strong net result.

The improvement in EBIT more closely reflects the underlying performance of the business. It was driven primarily by a return to traffic growth and lower fuel prices. AirBaltic's 2016 revenue of EUR286 million was just above its 2015 level of EUR285 million and its EBIT margin improved by 4.6ppts to 1.2%.

2016 was the fourth successive year in which airBaltic achieved a positive net result. In the period 2011 to 2012 it had reported net losses, with a loss as big as EUR121 million in 2011.

The airline had not previously reported annual EBIT figures until now, and this suggests that it had continued to make a loss on this measure until restoring EBIT profitability in 2016.

This return to positive EBIT is a significant milestone in airBaltic's post restructuring story, but its 1.2% margin is still very slim compared with the leading airlines in Europe.

The highest operating margin among European airlines in 2016 was Ryanair's 23.2%, and the highest for a legacy airline was Aer Lingus' 13.2%. If airBaltic's 1.2% margin were ranked with those of Europe's leading listed airline groups and their principal subsidiaries, it would rank 22nd out of 26.

Moreover, airBaltic's margin is low by comparison with the 8.3% estimated by CAPA for the world airline industry in 2016, a new peak for the sector. If 2016 does turn out to have been the peak in the airline cycle, this may add to airBaltic's challenge in achieving further margin improvement.

See related report: CAPA airline profit outlook: 2016 was top of cycle, but margins to stay above past cyclical peaks 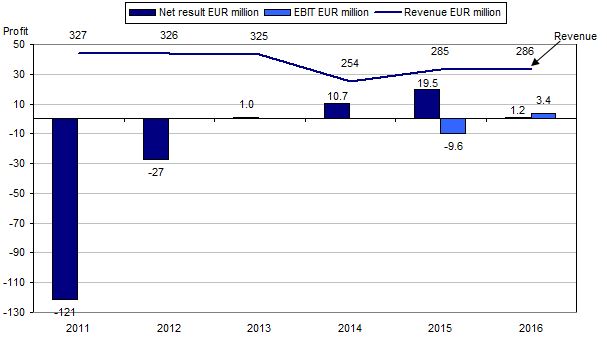 airBaltic carried 2.9 million passengers in 2016, an increase of 12% compared with the 2.3 million reported for 2015. This was its first year of traffic growth since 2011, when it carried 3.4 million passengers.

Since then, it had been implementing capacity cuts as part of a restructuring programme.

Capacity restrictions were imposed on airBaltic as a condition of EU approval for state aid provided by the Latvian state as part of the airline's restructuring. The programme effectively came to an end during 2016, when the capacity restriction was lifted and airBaltic resumed capacity growth. OAG data indicate that airBaltic's seat growth was weighted towards the winter months of 2016.

The airline's capacity growth was exceeded by its traffic growth and so, its load factor gained 3ppts to 74% in 2016. This was not quite back to the 75% level achieved in 2011 (no load factor figures were reported by airBaltic in 2013 and 2014).

Moreover, it was well below the 90%+ level achieved by leading LCCs in airBaltic's region, such as Ryanair and Wizz Air. However, airBaltic has some characteristics of a regional airline (half of its fleet is turboprop) and its load factor is reasonably strong compared with regional airlines. Its plan for 2017 does not expect further load factor improvements.

Traffic growth and load factor improvement were stimulated by lower yield, which fell by 5%. Downward yield pressure was partly a function of lower fuel prices. 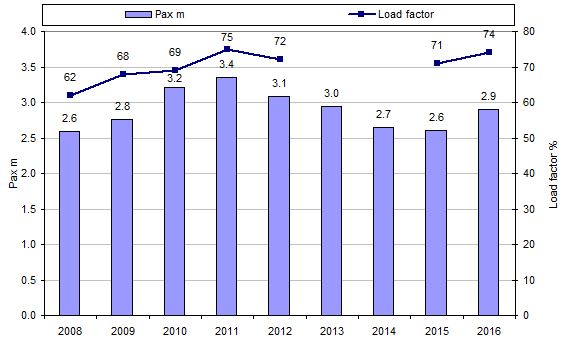 Speaking to CAPA in a telephone interview on 7-Apr-2017, Mr Gauss said that airBaltic's growth would accelerate in 2017. Passenger numbers are planned to increase by 16%, which implies returning to a level close to airBaltic's 2011 peak of 3.4 million passengers this year.

This is a disproportionately high level of traffic for an airline that is based in a country with a population of only approximately 2 million people. 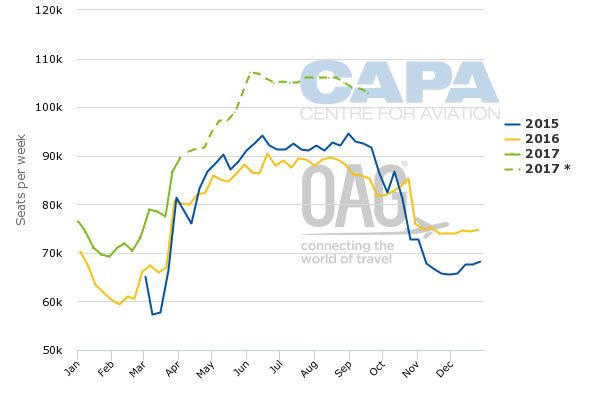 airBaltic was the CS300's launch customer

airBaltic took delivery of its first Bombardier CS300 aircraft on 28-Nov-2016, becoming the first airline to operate this variant of the CSeries with its first commercial flight from Riga to Amsterdam on 14-Dec-2016.

AirBaltic's CS300 delivery programme allows both for the replacement of its 11 remaining 737 aircraft, which have an average age of 20.2 years, and also for growth. It will operate 20 CSeries aircraft by the end of 2019, but its business plan calls for 22 jets by 2021 and so it is considering two further orders. Alternatively, it may retain two of its Boeing 737s.

In the past airBaltic financed the majority of its fleet with operating leases, but is employing on balance sheet financing for its CSeries programme, assisted by a recapitalisation in 2016.

The original CSeries order was made back in 2012, when airBaltic was undertaking its restructuring programme and still generating losses. Its next fleet decision will be about how to replace its 12 Bombardier Dash 8 turboprops.

AirBaltic is considering what would be the ideal replacement aircraft for its purposes and this could turn out to be a regional jet, rather than another turboprop, according to Mr Gauss. Among the possibilities the airline is mulling a possible order for the CS100, the smaller (100 seat) variant of the CSeries. 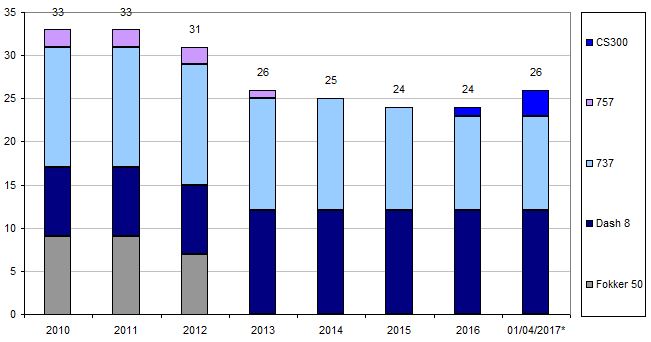 airBaltic's unit cost is in the LCC bracket

Based on data shared by Mr Gauss, and in other sources, CAPA has placed airBaltic on a scatter plot of unit cost (cost per ASK, CASK) versus average trip length for European airlines for the first time.

Broadly speaking, for an airline of its short average trip length, airBaltic's unit cost is in the LCC bracket (but at the high end). According to CAPA calculations, its CASK fell by 6% in 2016 (mainly thanks to lower fuel prices), outpacing the 2% fall in its RASK, thereby leading to its improved EBIT margin.

AirBaltic's place on the CASK versus average trip length chart is consistent with its positioning as what Mr Gauss calls a "hybrid low cost" airline.

AirBaltic's CEO said, "The back of the plane is the same as you get from an ultra LCC, but in front of the curtain, you get Lufthansa. We are not a hybrid, but a hybrid low cost".

On its CSeries flights, for example, it will sell 145 economy seats if that is where the demand is. As soon as it receives one business class booking, the first row of four seats then becomes business class.

If it receives five premium bookings, the curtain then moves behind the second row. This can lead to some spilling of economy bookings, but, said Mr Gauss, the premium yields are significantly higher.

AirBaltic also differentiates itself from LCCs in that it operates a hub and spoke model, in many cases with higher frequencies than LCCs offer, and is strongly focused on serving the Baltic region.

In addition to its main hub at Riga, airBaltic also offers a number of routes from Tallinn and Vilnius (to destinations that it serves from Riga) and high frequency connections between the three cities. It is the number one airline at Riga, number two in Tallinn and number three or four in Vilnius (depending on the season).

airBaltic continues to punch above its weight

Under CEO Martin Gauss, airBaltic has transformed itself from a heavily loss making airline close to bankruptcy. Latvia's national airline, and the largest airline in the Baltic region, has completed a restructuring programme, established a track record of positive net profit and now restored positive EBIT, made significant load factor gains, returned to capacity growth and started operating one of the most modern and efficient short haul jet aircraft in the world.

In 2016 it also achieved a capital increase, subscribed by a private investor alongside the national government. The 20% stake taken by Aircraft Leasing 1 SIA, which is fully owned by Ralf-Dieter Montag-Girmes, is to be transferred to a Danish investor, Lars Thuesens.

In its next phase of share register rejuvenation, airBaltic is seeking a strategic investor to take a stake of 49% or more in its equity and to provide up to EUR50 million in additional capital. According to Mr Gauss, the priority is to find another airline as its strategic investor, but a specialist aviation investor could fill the role.

Although airBaltic has had no interest in joining one of the global airline alliances, relying instead on a series of bilateral codeshare and interline agreements, this could be reconsidered if it finds an airline investor.

The new investor would be able to help airBaltic with financing its CSeries programme, making a replacement choice for its turboprops, further developing its network and ensuring that airBaltic continues to punch above its weight.

It will also hope that airBaltic can build sustainable profitability.