The long-haul low cost phenomenon in Asia is quickly translating to a more effective competitor for conventional network operations. At the forefront is AirAsia X and its original base of Kuala Lumpur International Airport (KLIA).

On the eve of opening KLIA's new low cost terminal, AirAsia X is rapidly growing its connecting traffic as the medium/long-haul low-cost carrier thickens its schedule and builds out its network. Transit traffic accounted for 43% of AirAsia X total passenger traffic in 2013, up from only 25% in 2011. AirAsia X expects this figure to approach 50% in 2014.

The growth in transit traffic has huge implications for the AirAsia Group and its main hub, KLIA. There are also implications for other Asian carriers and hubs as AirAsia starts to compete on city pairs that previously did not have any LCC options.

The gains in transit traffic at KLIA, which has recorded the fastest passenger growth over the last 15 months among Asia’s major airports, come at the expense of rival hubs. For example, neighbouring Singapore Changi has seen growth moderate significantly and risks a further slowdown unless it can attract a surge from the emerging LCC transit sector.

Malaysia-based and publicly listed AirAsia X has expanded rapidly over the last year, cementing its position as the world’s largest medium/long-haul LCC. AirAsia X grew its fleet in 2013 from 12 to 19 aircraft (16 A330-300s, one A330-200 and two A340s), giving it a 49% share of the total widebody LCC fleet in Asia-Pacific.

Jetstar International launched services in 2006 while AirAsia X began operation in 2007. Both carriers quickly recognised connections were essential for the long-haul low-cost model to be viable. Prior long-haul low-cost start-ups largely failed because they were completely independent and had no feed, leaving them highly vulnerable to selective competition from established network airlines.

Jetstar has closely guarded its transit passenger figures although has talked generally about the growth in connecting traffic within the group, particularly between its long-haul and short-haul units, as well with parent Qantas and outside partners. AirAsia X has been more forthcoming, particularly since its 2013 initial public offering.

AirAsia X transported 3.2 million passengers in 2013, with 1.4 million or 43% connecting at Kuala Lumpur onto other AirAsia Group flights. About 800,000 or 25% connected through the group’s Fly-Thru product, which offers passengers the option of paying an extra fee to through check bags and receive a boarding pass for the connection flight, while about 600,000 or 18% opted to self-connect.

About 1.1 million passengers or 34% connected onto short-haul flights operated under the AirAsia brand while about 300,000 or 9% connected onto other AirAsia X-operated flights.

Percentage of AirAsia X passengers that take connecting flights: 2011 to 2014 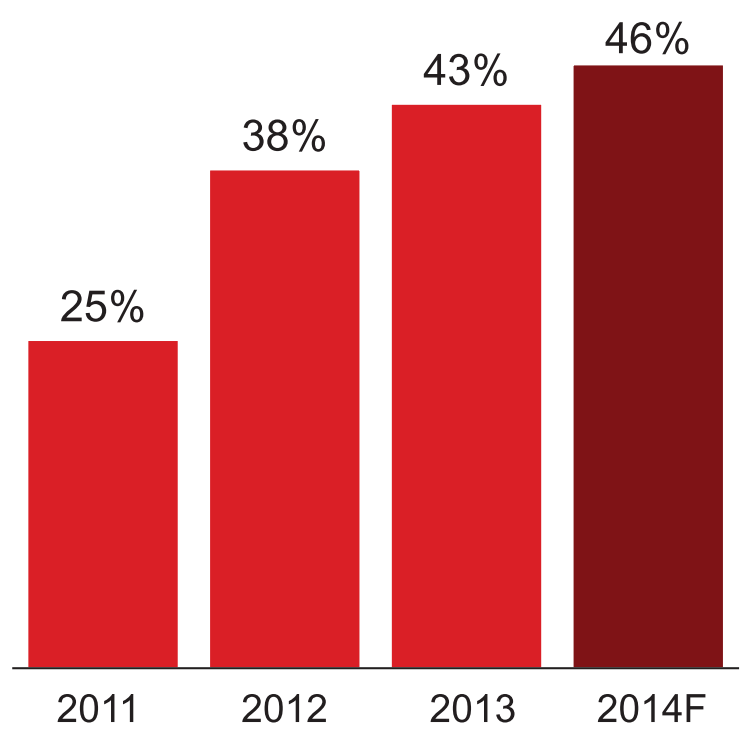 AirAsia X projects transit traffic will account for 46% of total passenger traffic in 2014 and believes the 50% threshold could potentially be reached as several initiatives to promote Fly-Thru sales are implemented.

AirAsia X is also introducing origin and destination pricing, replacing the sum of sectors pricing formula which is generally used by LCCs.

For now the impact is small given the relatively small traffic volumes and relatively small number of long-haul LCCs. But as AirAsia X and other long-haul LCCs expand, full-service carriers will see new LCC options increasingly pop up not only on new medium/long-haul point-to-point sectors but hundreds of city pairs which are not large enough to support non-stop services. These types of city pairs have traditionally been only sold by full-service airlines, often with high margins. The impact on full-service groups over time could be significant.

The biggest short-term impact on full-service airline groups could be in the Australia-North Asia market, which has become a focus of AirAsia X as it looks to increase AirAsia X to AirAsia X connections. AirAsia X aims to have 16% of its total traffic in 2014 connect onto another AirAsia X flight compared to only 9% in 2013 and 4% in 2011 and 2012.

AirAsia X estimates it captured a 10% share of the Australia-North Asia market in 2013 and aims to double this to 20% in 2014. This is a logical market for AirAsia X to promote as it is relatively under-served, particularly from an LCC perspective and compared to the intensely competitive Australia-Southeast Asia market.

AirAsia has roughly doubled capacity to Australia over the last year and needs to push up the connection portion of its Australia traffic as the local Australia-Malaysia market is not large enough to support the capacity increase.

The Australia-North Asia push is made possible as AirAsia X has added second daily flights to its main Australian destinations, opening up faster connection options. The number of weekly frequencies available under the Fly-Thru product increased by 69% in 2013 to 4,614 and is expected to increase by another 28% in 2014 to 5,883. 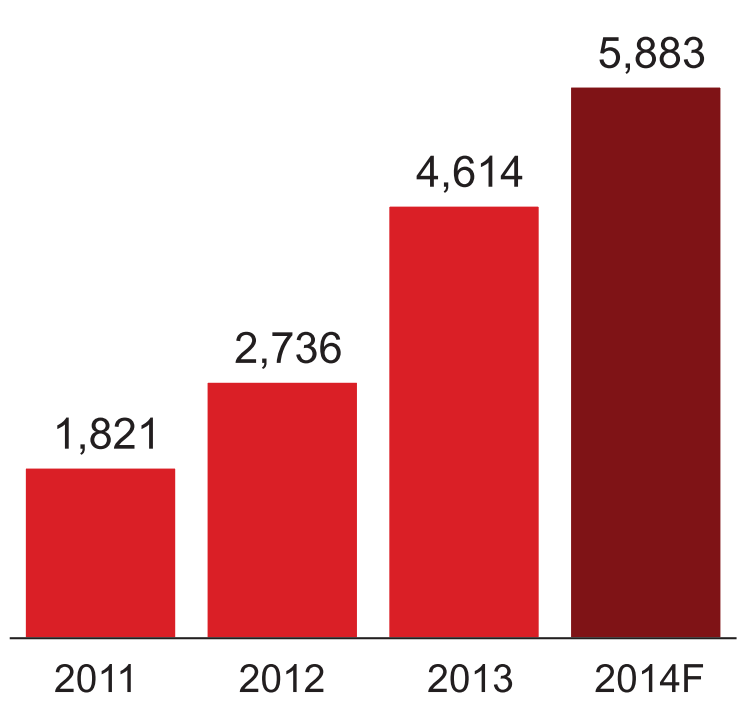 AirAsia X is adding three aircraft to its Malaysia-based fleet in 2014 for a total of 22 aircraft (20 A330s and two A340s). While the fleet expansion in Malaysia is slower than 2013, the expansion from a year-over-year capacity standpoint is faster as a majority of the 2013 deliveries came in the latter portion of the year. AirAsia X ASKs were up 19% in 2013 while RPKs increased by 17%, seats by 26% and passenger numbers by 22%.

The 2013 expansion was focused primarily on thickening routes, which is critical in driving more transit traffic because more connections open up as frequencies are added. A second daily flight to Melbourne, Perth, Sydney and Taipei was introduced in 2013 while Beijing, Chengdu, Gold Coast, Hangzhou, Kathmandu, Osaka and Shanghai were increased to daily.

AirAsia X plans to increase Seoul and Tokyo to double daily in 2014 while Adelaide will be increased to daily. Three new routes are also planned for 2014 – Chongqing, Nagoya and Xian.

As a group AirAsia X has seven A330 deliveries in 2014, matching the figure from 2013. But four of these deliveries have been allocated to new affiliates Thai AirAsia X (TAAX) and Indonesia AirAsia X (IAAX).

TAAX is currently operating one aircraft on charter flights to Tokyo and plans to begin scheduled operations on 17-Jun-2014 with service to Seoul. IAAX plans to launch operations in 4Q2014 with services to Australia and North Asia. Both carriers plan to have a fleet of two A330-300s by the end of 2014.

Connections are also a key component of the business model for TAAX and IAAX. Short-haul affiliate Thai AirAsia introduced at its Bangkok Don Mueang hub in late 2013 the Fly-Thru product, which previously was only available for connections at KLIA.

Thai AirAsia is now promoting short-haul to short-haul connections and expects the ability to feed TAAX will result in an incremental 1% to 2% gain in load factor. Indonesia AirAsia also expects a surge of traffic at its Bali hub after the launch of IAAX.

AirAsia X’s multiple hub strategy envisions rapid growth driven by more point-to-point traffic as more dots in the AirAsia network are connected. But even more crucially the strategy sees huge opportunities to drive up transit traffic as new city pairs are opened up and as options on existing city pairs are expanded. AirAsia X believes this will enable it to triple in size over the next three years without having to add new destinations to its network.

Denpasar Bali Ngurah Rai and Bangkok Don Mueang airports are poised to benefit from the AirAsia X strategy as new sources of traffic are opened up.

While conventional wisdom would point to the launch of new Lion Air Group Malaysian subsidiary Malindo Air as driving the growth, Malindo carried less than 1 million passengers at KLIA in 2013. AirAsia and MAS accounted for a much bigger proportion of the growth, with increasing transit traffic for both groups the main driver.

As CAPA has previously reported, MAS pushed up its transit share of total passenger traffic from about 30% to 35% in 2012 to about 40% in 2013. Although these figures are not official or exact, they indicate that most of KLIA’s growth in 2013 was driven by transit growth at Malaysia’s two main airline groups. This theory is supported by logic as it unlikely the local Malaysian market would have been able to support the 19% increase in traffic.

Kuala Lumpur traffic overall should continue growing, albeit at a slower pace than 2013 and 1Q2014, as AirAsia X expands and drives up its transit traffic. There are seemingly tremendous opportunities for further growth in this segment – with the clear implication that this can shift the competitive balance with neighbouring hubs.

Can Changi and Scoot/Tigerair learn anything from KLIA and AirAsia X?

The recent growth spurt at KLIA and the success the airport has had at increasing LCC transit traffic should serve as a wake up call for Singapore and Changi. While KLIA traffic has been growing at a rate approaching 20%, traffic at Changi grew by only 5% in 2013 and by only 1% in 1Q2014.

More LCC transit traffic could unlock a new period of growth for Singapore. But if Changi does not succeed at attracting this new segment traffic will likely grow in the low single digits over the short to medium term.

While AirAsia has steadily grown its transit traffic, Scoot and Tigerair currently see an extremely low volume of transfer traffic. The two carriers began offering joint itineraries over one year ago but the partnership has not yet generated significant traffic. Approval in their pending application with Singapore competition authorities for permission to discuss coordinating schedules could help but Scoot and Tigerair will still need to take the initiative and implement a stronger partnership.

If Scoot and Tigerair were able to follow the AirAsia X/AirAsia model in pursuing transit traffic, Changi could easily see a double-digit increase in LCC traffic without having to rely on its increasingly mature local short-haul LCC sector.

For now the numbers may not seem huge – the 1.4 million transit passengers AirAsia X recorded in 2013 represents only 3% of KLIA’s total traffic. But the growth opportunities and implications in the emerging medium/long-haul LCC transit sector are staggering.

LCCs are only just beginning to penetrate medium/long-haul one-stop city pairs such as Sydney-Siem Reap, Manila-Kathmandu and Medan-Seoul. A shift in the airlines and hubs which see these kinds of flows is surely inevitable.