LCC shares were mixed on Monday (03-Aug-09), as oil prices continued their gains. New York oil prices gained USD2.13 to settle at USD71.58/barrel on Monday, the third consecutive day of substantial increases and the first time in a month that Nymex crude traded above USD70.

The recent strength in the oil price can be attributed to the weakening dollar (The USD reached its lowest point against the Euro since Sep-2008 on Monday) and signs of manufacturing level improvements (US manufacturer production jumped to its highest levels in more than two years in Jul-2009). In London, oil prices gained USD1.85 to close trading at USD73.55.

Leading the LCC gainers again yesterday was SkyEurope, which jumped 6.9% following Friday’s 7.4% gain, on news that the struggling Eastern European LCC has signed two separate financing agreements to provide additional liquidity for the business. Also in Europe, Ryanair gained 0.8 %, while easyJet was 0.8% lower.

In the Asia Pacific region, AirAsia shares gained 2.7%. CEO, Tony Fernandes, yesterday stated the carrier expects to have more than MYR1 billion (USD286 million) in cash by the end of 2009, as it improves its profitability levels and undertakes a private placement. The carrier has proposed a private placement of up to 481.1 million new ordinary shares of USD0.03 (MYR0.10) each, representing up to 20% of the issued and paid-up share capital of the carrier to strengthen its balance sheet and increase financing flexibility. The placement could potential raise gross proceeds of up to RM601.4 million (USD172 million).

In the Americas, Southwest gained 6.5%. Southwest is seen as the favourite bidder for Frontier Airlines, with an auction scheduled for 11-Aug-09. 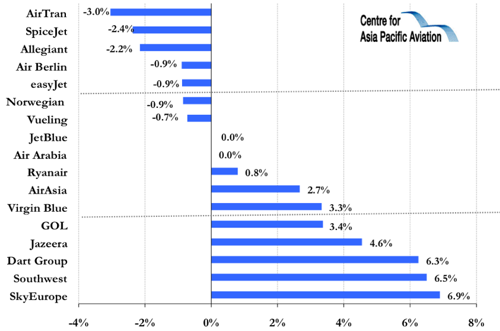