AirAsia's shares fell the most in six weeks in Kuala Lumpur trading yesterday, after the carrier sold shares at a discount of 5.7% from the previous close (and approximately 6.7% lower than the five-day volume-weighted average price up to and including 14-Sep-09) in a private placement aimed at reducing the carrier’s debt levels. 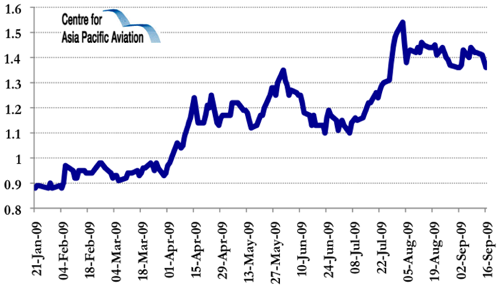 Meanwhile, RHB Research maintained an “underperform” rating on the stock “to reflect concerns on AirAsia’s still relatively high net gearing, as well as the still tough operating conditions of the airline industry.” Similarly, OSK Research maintained its ‘neutral’ rating with a target price of MYR1.48, stating it remains cautious on the carrier’s prospects.

Virgin Blue's shares jumped 5.5% yesterday, as the carrier stated it still expects to break even in FY2009-10, despite this year being "the most taxing, the most complex, the most challenging, the most vexing and quite frankly the most unexpected" period its CEO, Brett Godrey had experienced. Mr Godfrey added the carrier is yet to see significant signs of a recovery in demand and one of the biggest challenges ahead for the industry would be the possibility of speculators increasing oil prices.

Mr Godfrey also indicated Virgin Blue is currently in talks with Boeing for the purchase of up to AUD4 billion in new aircraft, to replace 25 of its B737 aircraft whose leases are set to expire from 2011. The carrier plans to purchase between 35 and 50 new aircraft. 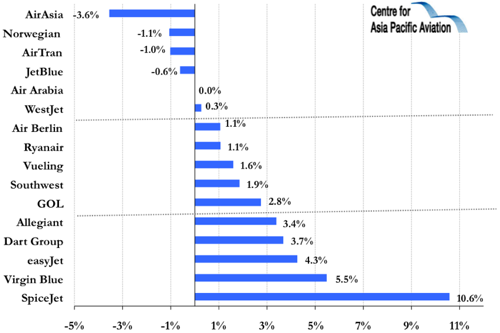