Air Lease Corporation reported a net income of USD3.2 million, or 5 cents per share, in its first quarterly report as a publicly listed company. Led by Steven Udvar-Házy, Los Angeles-based Air Lease Corp was founded in early 2010 and listed on the New York Stock Exchange on 19-Apr-2011, joining Aircastle, FLY Leasing, AerCap and Aerocentury on the list of aircraft lessors listed on the NYSE.

Air Lease’s offering was upsized by 20% and the underwriters exercised their over-allotment option in full, resulting in the sale of an aggregate of 34.8 million shares of Class A Common Stock. Net proceeds of the IPO were USD868 million. These funds were not included in the financial results in its 1Q reports.

Air Lease shares continue to trade at premiums relative to its aircraft leasing peers. Shares are valued at 1.5 times net tangible book value, while AerCap trades at around 1.0 and Fly Leasing at around 0.8. Despite increased competition in the leasing market “there’s no doubt he’s the smartest man on the street”, said Guggenheim Aviation Partners’ Steve Rimmer in Apr-2011. “If Hazy can’t do it, nobody can.” BofA’s Ron Epstein, commenting on the premium commanded by Air Lease shares, stated: “You’re buying that one because you’re buying Hazy.”

Interest in the company remains high and Air Lease shares have gained 9.3% since its listing to close at USD28.98 on 16-May-2011, just below the USD29.05 high reached two days after the listing.

Air Lease raised USD1.3 billion in summer 2010 in a private placement of equity with Leonard Green & Partners LP, Ares Management LLC and Commonwealth Bank of Australia. With the USD868 million raised from the IPO, chairman and CEO Steve Hazy said on 16-May-2011 that the company’s capital base give it “a solid platform for the continued expansion of the aircraft fleet, whether through aircraft orders, purchases of aircraft from airlines and other leasing companies, and/or acquisitions of aircraft portfolios”.

Mr Udvar-Hazy stated the primary objective of Air Lease is to grow the company organically, but “remain open to other strategic opportunities as they arise”. In an interview with Bloomberg in Apr-2011, he set tongues wagging in the leasing business when he mentioned his readiness to talk to American International Group if it were interested in spinning subsidiary ILFC as a non-core asset, an option which was raised in 2009 following AIG bailout by the US government. In a securities filing last week, ILFC said its aircraft leasing unit, which has been among its strongest-performing units in the past, is not for sale.

The size of Air Lease’s fleet stood at 49 aircraft at 31-Mar-2011, an increase of nine aircraft from 31-Dec-2010. The strong growth momentum continued into Apr-2011, with the lessor having taken delivery of a further seven aircraft this month to take its fleet to 56 aircraft. Air Lease recorded USD530.1 million of aircraft additions in 1Q2011, bringing the aggregate cost of it’s fleet increased 32.2% to USD2.18 billion.

Aircraft Portfolio Based on Units as of 31-Mar-2011 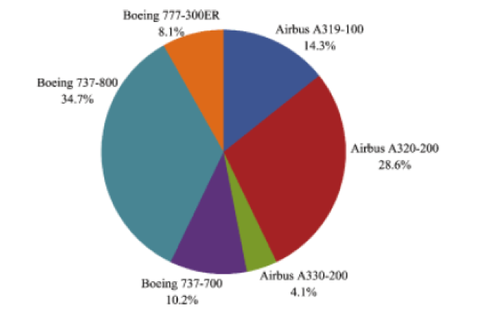 Air Lease plans to grow its fleet to 100 aircraft by 2012, which would represent a 150% increase in fleet numbers in the space of 12 months, making the arguably company the fastest-growing commercial aircraft owner in the world. The acquisitions would take the lessor’s total fleet value to around USD4 billion by 2012, according to Mr Udvar-Hazy. President John Plueger and Mr Udvar-Hazy said that Air Lease remains in “constant dialogue” with Boeing and Airbus about opportunities for early deliveries as the rate of cancellations increase, due to volatility in North African markets, ongoing delays in new aircraft projects and as over-ambitious orders made in the past catch-up with owners and operators. 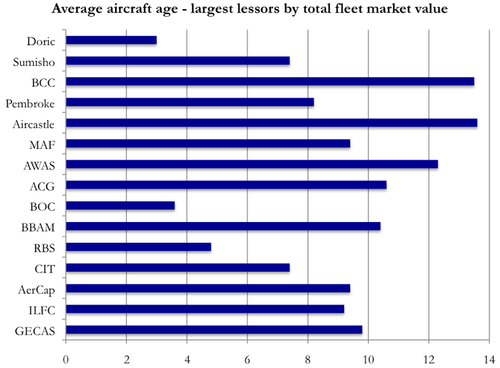 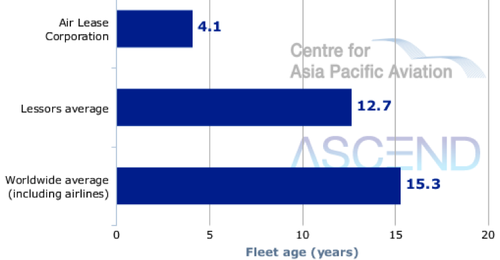 Expansion of the customer based in the quarter saw the weighted average remaining lease term extended to 5.9 years from 5.6 years. All aircraft coming in 2011 have been placed as at 31-Mar-2011, indicating strong short-term demand for the lessor’s assets.

“We believe that the industry continues to drive towards leasing the youngest, most fuel efficient aircraft for growth and for replacement of older, less efficient and less environmentally-friendly aircraft,” Mr Plueger stated.

During the quarter, Air Lease entered into 21 lease transactions covering 60 aircraft across 18 customers. Mr Plueger confirmed the lessor is witnessing strong and growing demand for its aircraft, particularly from the Asia Pacific. Air Lease completed its largest lease transaction to date in the quarter in Asia by placing 15 new aircraft (10 new Airbus A320-200s and five new Boeing 737-800s) from its future order stream with Shanghai-based China Eastern. As part of the 18 aircraft transaction, Air Lease will acquire three used Boeing 767-300ERs from China Eastern that have been placed with other carriers in Asia. As at 16-May-2011, Air Lease has 56 aircraft on its books, which are on lease to 37 airlines across 22 countries.

Mr Udvar-Hazy was quick to point out Air Lease’s acquisition of B767s as part of the China Eastern transaction does not signal a shift in strategy nor give a statement about the company’s interest in older assets or the secondary market. “Youth” assets will remain the focus, he said.

Geographic fleet distribution based on units as of 32-Mar-2011 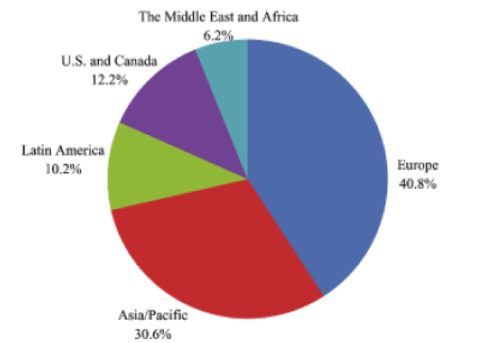 In line with its ambitious growth plans subsequent requirement for financing, CFO Jim Clarke stated Air Lease had continued to build a diverse group of lenders. The company has established banking relationships with 17 banks, which have provided lending facilities with an overall composite cost of funds of 3.29%. Air Lease tapped the unsecured debt markets in the quarter, closed three revolving bilateral unsecured credit facilities totaling USD63.0 million and increased the capacity of one of its existing facilities by USD5.0 million. The company has 12 unsecured revolving bilateral credit facilities totalling USD308.0 million.

Air Lease executed an amendment to the Warehouse Facility that took effect on 21-Apr-2011. This amended facility provides the company with financing of up to USD1.25 billion. Air Lease can draw on the facility during an availability period that was extended to Jun-2013. The interest rate on this facility, as amended, was reduced to LIBOR plus 2.50% on drawn balances and 0.75% on undrawn balances.

Echoing comments from other lessors such as BOC Aviation and AerCap, Air Lease feels strongly positioned in the face of a high oil price environment, Mr Udvar-Hazy said. “To the extent that they [fuel prices] increase, they simply bias in favour of the very young, most modern aircraft that we specialise in,” he stated. Despite the added importance of airlines having cash in such environments, Mr Udvar-Hazy said he’s not expecting an increase in sale and leaseback opportunities.

He also downplayed the impact of increased competition in the sector after substantial amounts of capital were raised in 2010, particularly at the area of the market in which Air Lease competes. Many commentators and industry participants have recently expressed concern over the amount of companies chasing the same deals, which plays to the advantage of airlines and forces down the lessors’ returns. “I don’t see any tremendous overheating for competition for that product [young aircraft]”, with Air Lease continuing to make “expected progress on that front”.

Emerging markets, which typically operate older aircraft assets, will continue to be targetted by Air Lease Corp. Increasing sovereign and private wealth in emerging economies is expected to drive demand for air travel and for more modern aircraft, with Air Lease planning to tap into that growth. Asia, Africa, Latin America and the Middle East are where economic growth is expected to drive a significant increase in air traffic, according to IATA. Mr Udvar-Hazy said that despite recent interest rate hikes in many emerging markets to curb inflationary pressures, Air Lease “has not seen any [negative] trend so far on advanced bookings or airlines statistics in these regions”.