Air India has almost doubled its bailout request from the Indian Government, in the form of an equity injection and a soft loan (30:70 split), to USD813 million from USD467 million requested just two months ago. The amount is roughly equivalent to the revised expected losses for the carrier this financial year.

The request puts the Indian Government into a difficult position, as support for the national carrier would distort the competitive environment for India's troubled private carriers. Jet Airways and Kingfisher have resorted to an operational merger in an attempt to stem losses and both are seeking to raise fresh debt and equity from domestic and offshore sources.

Air India's losses have been caused by its slow integration with the former Indian Airlines, weak demand and excess industry capacity. The carrier, which was reported to be making losses on 200 of its 207 routes, has recently cut back its network and is seeking to raise cash from the sale-and-lease-back of aircraft.

Total passenger numbers fell a significant 13% year-on-year compared to last year's 3.6 million. Encouragingly, traffic appears to have bottomed in Sep-08, but the sector is far from being given the all clear. 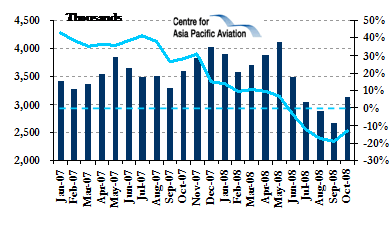