For the first time in many years, timing is on the side of the air cargo industry. The sector has grappled with a bad combination of weak consumer sentiment translating to lower demand, high fuel prices impacting the many inefficient cargo aircraft operated, and growing competition adding to over capacity. But now US ports are congested and Japanese manufacturers need to transport goods to the US urgently, leaving the slack to air freight just as fuel is at low prices and the start of the year is a slow season.

This is a silver lining but unlikely to be a major contributor to many carriers, in part because this is expected to be a temporary demand scenario. ANA and JAL do not operate trans-pacific freighter aircraft, so cargo operators like Atlas Air and Nippon Cargo Airlines are likely to benefit, as well as other Asian combination carriers like Korean Air and Cathay Pacific that could, depending on availability, route Japanese cargo over their respective hubs.

Ports face closure while there is urgent demand for auto parts

A labour dispute could shutdown western ports in the US. The west coast is the traditional arriving point for goods from Asia. While the ports are not shutdown - yet - reports indicate growing queues of ships.

The situation is pressing for Japanese automakers, which are recalling cars in the US due to defects, including faulty airbags allegedly responsible for deaths. Toyota, Honda and Fiat Chrysler had the most recent recall, of 2.1m vehicles, some of which also need replacement air bags. Estimates are that one million airbags are required in the US; as many as 18m vehicles are being recalled. Toyota and Honda are Japanese automakers while one airbag manufacturer is Takata Corporation. of Japan.

Automaker Subaru's parent company, Fuji Heavy Industries, has reportedly already chartered flights to avoid production line problems in the US. 42 extra Japan-US air freight charters have been booked for Feb-2015, according to The Loadstar. The Loadstar detailed that JAL will operate six charters (although this is unclear as JAL does not operate dedicated freight aircraft) while US-based Atlas Air will have over 20 charters. ANA and US-based Kalitta could also have charters.

January and February are typically quieter months for air cargo

Anchorage is the typical re-fuelling stop for dedicated freight aircraft transiting from Asia to the US. Anchorage is mostly on the Asia-US flight path and allows freighters to load enough fuel from Asia to reach Anchorage, rather than carry more fuel (at a weight and financial penalty) to reach continental US points. Special US regulations support Anchorage as a trans-pacific cargo hub. So Anchorage is an indicator of trans-pacific cargo, and in 2012, 2013 and 2014, cargo volumes were at their lowest in January and February compared to the rest of the year (even accounting for February's fewer days). 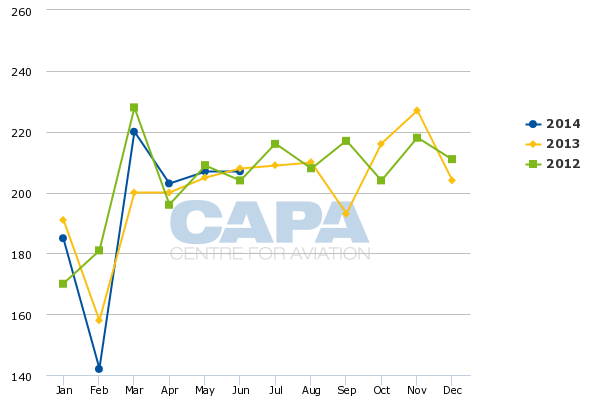 Nippon Cargo Airlines and Polar Air Cargo, to be discussed later, are two dedicated freight carriers that are large in the trans-pacific market. Polar's statistics are specified for Pacific markets while NCA's are unspecified international markets, but it can be assumed this is primarily for the Pacific. Both show the carriers having lower demand at the start of the year (with the exception of 2011 at Polar). 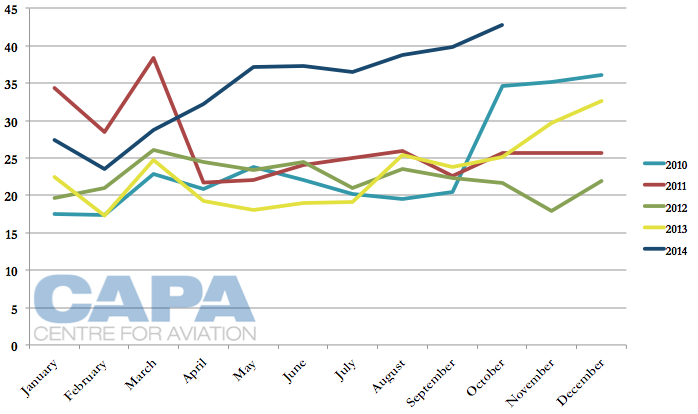 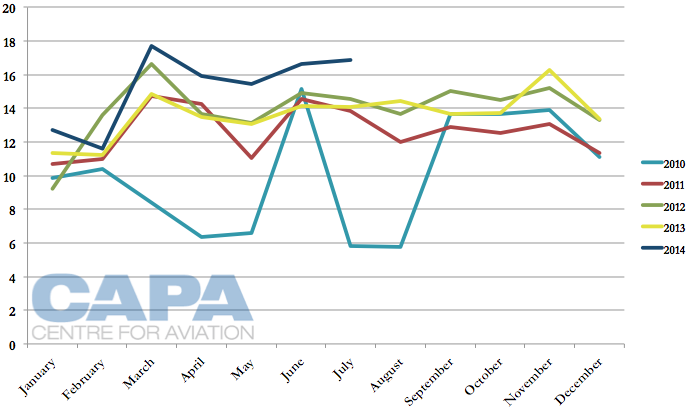 ANA and JAL do not operate trans-pacific cargo flights

JAL has withdrawn its dedicated freighter fleet while ANA has 10 freight aircraft, all 767 variants including seven -300ER(BCF) and three -300F. These are mostly used on domestic and intra-Asia sectors. For trans-pacific lift, ANA and JAL are dependent on bellyspace on their wide passenger networks.

However, their flights do not go near the US south where automobile manufacturing is. But given the urgency, parts could be trucked from passenger points to final destinations. Dedicated freight carriers could bring the parts closer to where they are needed in the US, and also pick up the parts in Nagoya, where the manufacturing is done in Japan. ANA and JAL's North American flights depart from Tokyo.

ANA has cast doubt on its ability to lift cargo, telling Bloomberg: "Since autumn last year, ANA cargo flights to the U.S. from Japan have been full, there is no space." A holiday rush for freight is understandable, but it is unclear what continues to drive the demand for space on ANA flights. ANA and JAL's aircraft should not have weight restrictions on cargo since the aircraft are being flown under range, do not have high-density seating, and eastwards trans-pacific flights often benefit from favourable winds this time if year.

US airlines also have large Japan-US networks (with American and United flying to the US south, Dallas and Houston respectively) but they have not been publicly linked to any special airlift. 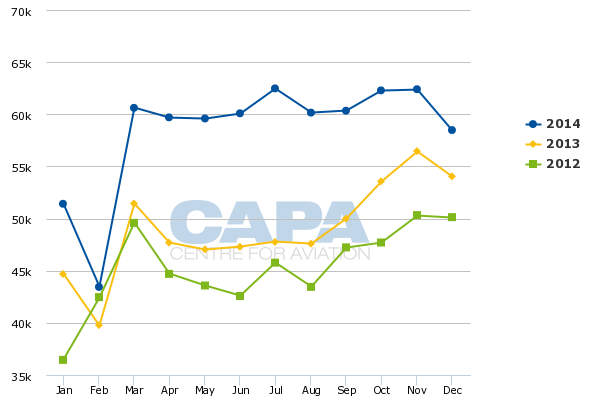 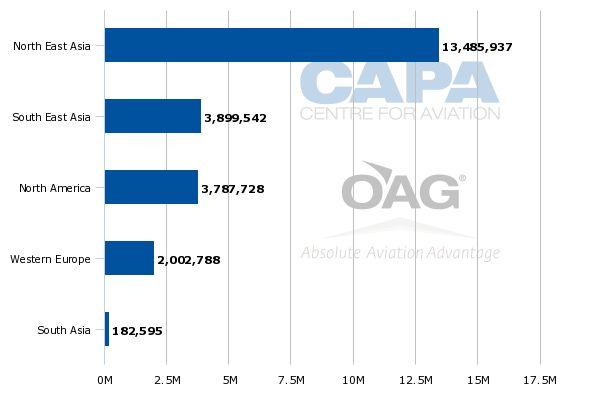 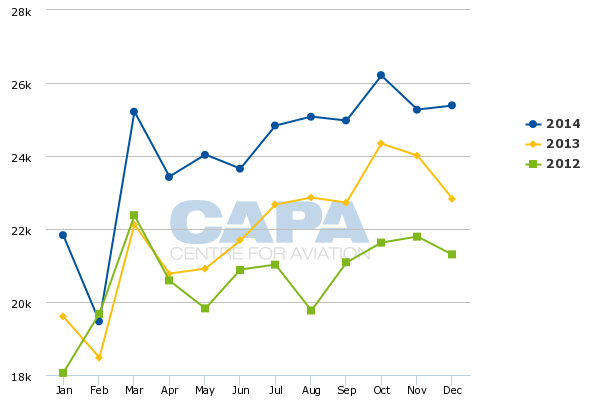 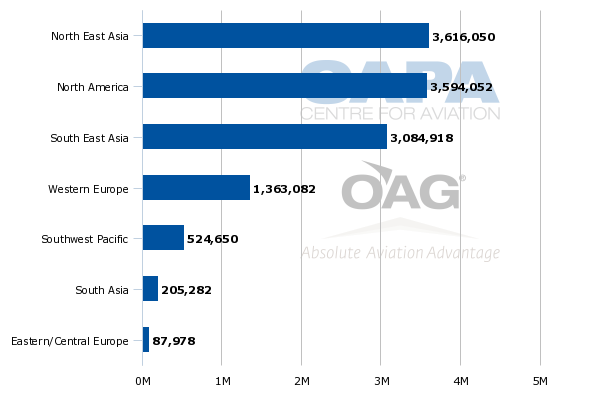 Rather than US or Japanese passenger airlines, the benefit of this surge in demand is likely to fall to Nippon Cargo Airlines and Polar Air Cargo. Both are all-cargo carriers large in the trans-pacific market. In Feb-2014, Nippon Cargo Airlines had 55 flights to the US, all from Tokyo Narita, according to US BTS data. Polar Air Cargo had 63 flights to US from a number of Asian cities, including 15 from Japan (13 from Nagoya and two from Tokyo Narita). Polar's existing experience with Nagoya-US demand may be beneficial in helping it secure more flights since the auto parts are likely to originate in Nagoya. Kalitta is not as large as Polar in Asia. Kalitta's Asian network is largely confined to Hong Kong.

NCA has a network across Asia that allows it to hub freight over its Narita base whereas Polar Air can fly direct to the US from various Asian points (but Polar also has an intra-Asia network). NCA's largest cargo route measured by available payload is between Narita and Anchorage but is followed by a number of a intra-Asia routes, according to OAG data. 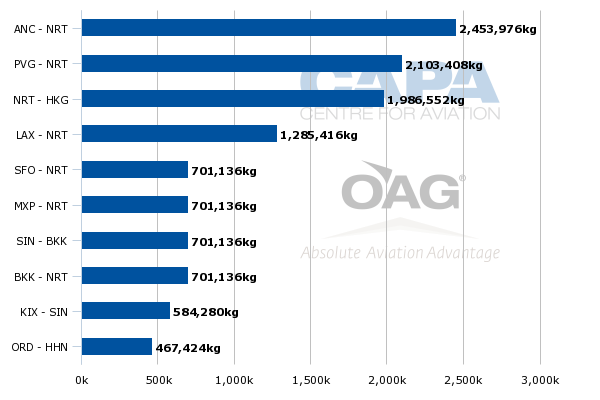 Source: CAPA Fleet Database
Firm orders include those placed directly by the operator and by lessors assigned to the operator, from 9-Feb-2015 onwards.

Source: CAPA Fleet Database
Firm orders include those placed directly by the operator and by lessors assigned to the operator, from 9-Feb-2015 onwards.

Other Asian airlines with cargo network could benefit

Given the lull the air cargo sector at this time of year, other combination (passenger and freight aircraft) airlines may be able to offer cheap supply on existing flights, an alternative to chartering entirely new services. This would entail backtracking around hubs (Seoul Incheon for Korean Air, Taipei for China Airlines and EVA Air and Hong Kong for Cathay Pacific).

The backtracking itself is not an issue, unlike in passenger markets, but will add time to what is potentially a very sensitive environment. The airlines fly widebody aircraft between their hubs and Japan. From their hubs, Cathay and Korean Air can have two or more daily cargo flights heading to the US, in addition to any available bellyspace. Further, China Airlines has a freighter flight from Osaka Kansai to the US, in addition to three or more daily freighter flights from Taipei. With their existing size, any benefit will likely be small in the big picture, although still appreciated in the short term.

It appears the biggest benefit will flow to US cargo carriers. This will be welcome considering in 2014 their FTKs grew only 2.4% on average, according to IATA. Asia-Pacific airline FTKs grew 5.4% while airlines from the Middle East were up 11.0%, according to IATA. Airlines from Asia-Pacific accounted for 46% of the total global expansion in FTKs while Middle East airlines accounted for 29% of the global expansion. Combined, the two regions accounted for 75% of all growth.

One downside is this sudden demand spike could postpone decisions on how to address the future of air cargo. The demand reinforces principal views about cargo: it can provide short notice lift, transport over-sized items, and link destinations (Nagoya to Alabama) where passenger aircraft do not fly (at all or with required payload). The counter-argument is volatility - where the strong times may no longer be enough to offset the weak times.