Air France-KLM (+5.1%), Lufthansa (+3.7%) and British Airways (+3.6%) led the market up in an unaccustomed trifecta. It has been a while since the market held the big three in such high regard. But a combination of higher fuel prices (which swing the balance a little more in the legacy airlines’ favour), slightly improved economic sentiment and – for Air France at least - some less than bad news contributed to the gains.

Vueling (+3.6%) and TUI AG (+3.6%) also fared well, each of them coincidentally on potential merger outcomes.

And a bullish report from analysts at JP Morgan Chase and Co, helped a little, suggesting that the "green shoots" were really not in fact just weeds, but were actually studded with diamonds. The analysts believe that “current [airline] data is already starting to show a sequential improvement.” As a result, they argued, several European airline stocks, which had not alighted on the last month’s market updraft, were now the “crown jewels” among industrial shares at present. 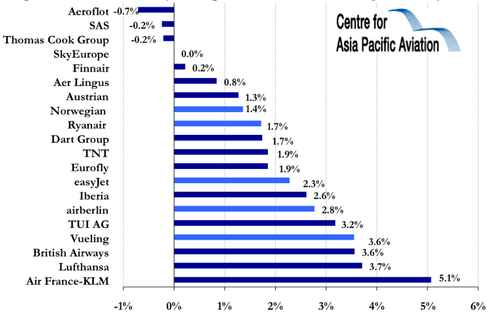 Green shooters are clutching at straws

In reality, The Centre sees no such signs of improvement. Analysing the global data on a day-to-day basis as we do, the best that can be said is that there are some signs that the steep rate of decline in the airline and air travel sector might be tailing off. That is far from suggesting that anything is likely to improve in the near future. It merely notes that things are (perhaps) not getting worse faster. Even that is hard to say, because the months of March and April were distorted by the way that Easter affected the market, falling in March in 2008 and in April this year.

And, unless the situation improves soon – that is in less than six months – most major airlines are simply burning money, with no obvious alternative. The value of a strong balance sheet is simply that there is more family furniture to burn. But that is not a solution, merely a temporary warm feeling. It is still cold outside, and those green shoots are not likely to sprout, at least in the airline sector.

In the unlikely event that the global economy is about to improve, what happens? Oil consumption goes up. Fuel prices – whose greatly reduced recent levels have shielded airlines from the shock of disappearing demand – will rise again. Up go costs, so the gap between cost and revenue grows wider.

An industry at a tipping point

Whether or not the airlines’ shares are over- or under-priced relative to the rest of the market, we do not pretend to know. But the airline sector is a special one, with a mix of elements of retail (some discretionary, some corporate) and commoditised pricing.

It is distinguished by the fact that it is greatly distorted by government restrictions on entry and behaviour. This is a point that is particularly important now, as the whole global regulatory system may be at a tipping point in terms of the way the industry is regulated.

Here, the Air France-KLM/Delta Joint Venture is a useful touchstone. Even the mere fact that they are only in a position to establish a JV (after many years of preparation), rather than actually merge, is a signal of the constraints under which international airline companies are forced to operate.

Meanwhile, there is no doubt that yesterday’s long awaited JV announcement is good news for the carriers concerned. It places the two very large groups in a much stronger position.

And, for example as we noted yesterday, Air France-KLM has been able to cut back on its (unprofitable) US capacity to a greater extent than on its other route groups – due largely to the ability to codeshare on its JV partners and still maintain a visible presence.

The following is Air France-KLM’s announcement from 20-May-09:

The Air France-KLM Group and Delta Air Lines today announced a new long-term joint venture whereby the partners will jointly operate their trans-Atlantic business by coordinating operations and sharing revenues and costs of their trans-Atlantic route network. The airlines will cooperate on routes between North America and Africa, the Middle East and India, as well as on flights between Europe and several countries in Latin America.

For customers, this joint venture will result in more choices, frequencies, convenient flight schedules, competitive fares and harmonized services on all trans-Atlantic flights operated by the partners.

"This strategic partnership puts us in a good position compared with other major alliances, which are extremely active on the world's leading long-haul market. By integrating our trans-Atlantic operations, we will give our passengers what they desire: more choice, more frequencies, more convenient flight schedules and superior customer services" said Pierre-Henri Gourgeon, president and CEO of Air France-KLM. "By optimizing the use of our pooled resources, this joint venture will help us weather the current economic situation and protect our product offering.”

Global passengers will benefit from access to a vast network offering over 200 flights and approximately 50,000 seats daily. That network is structured around six main hubs: Amsterdam, Atlanta, Detroit, Minneapolis, New York-JFK and Paris-CDG, together with Cincinnati, Lyon, Memphis and Salt Lake City. The airline partners will provide their corporate clients with a broad, global offering that best meets their expectations for the most convenient airline system, while providing efficient account management as well as ease of travel for their clients. Going forward, this structure will represent a major strength for the SkyTeam alliance, of which all three airlines are members.

“The structure of this joint venture, in which we operate as a single business where we consensually develop our strategies and share revenues and costs, provides the incentives for us to collaborate in a way that generates benefits for customers, shareholders and employees of our three airlines,” said Richard Anderson, CEO of Delta Air Lines.  “Customers will benefit from the unique scope and choices we will offer, while shareholders and employees will benefit from the stronger competitive and financial position of our respective airlines”.

Peter Hartman, president and CEO of KLM, emphasized: “We know from experience that the success of a joint venture calls for shared vision and long-term commitment, the simplest of operating rules and fair sharing of revenues and costs. At KLM, we are proud to be starting to write a new page in our history alongside partners who fully share our exacting standards of quality and service. Today, we are building a team that will give its very best for trans-Atlantic passengers.”

Included in the JV figures are results from trans-Atlantic services under the flight codes of all three airlines (AF, KL and DL codes), as well as the contribution from connecting flights beyond the hubs.

Wherever traffic rights permit, and notably between the United States and the European Union, flights will be mutually code-shared.

The joint venture will also step up the visibility of all three airlines in more than 400 airports: the Air France, KLM and Delta brands will be combined at all North American and European airports wherever any of the three carriers operates. Moreover, each partner will also support the three brands in advertising and marketing.

Governance of the joint venture will be equally shared between the Air France-KLM Group and Delta. An executive committee comprising the three CEOs and a management committee comprising representatives from Marketing, Network, Sales, Alliances, Finance and Operations will define strategy. Ten working groups will be responsible for implementing and managing the agreement in the sectors of network, revenue management, sales, product, frequent flyer, advertising/brand, cargo, operations, IT and finance. The joint venture will not lead to the creation of a subsidiary.

The venture is a long-term, evergreen arrangement that can only be cancelled with a three year notice, after an initial term of 10 years.

Key facts and figures on the joint venture

The venture is a long-term, evergreen arrangement that can only be cancelled with a three year notice, after an initial term of ten years.