The margin contraction in 3Q resulted from a bigger fall in unit revenue relative to 1H, without a matching fall in unit cost (in spite of lower fuel prices). Passenger unit revenue fell by 6% to 7% for all three (adjusted for currency movements), with long haul markets especially weak. Unit revenue was particularly soft on routes to Asia Pacific and on the North Atlantic (and, for Lufthansa Group) on the South Atlantic.

The combined operating margin of the three has been a good indicator for European airlines overall in the past. The outlook for FY2016 for each still suggests that there will be margin improvement for the year as a whole. This could be in line with, or slightly above, the cyclical peak reached in 2007 – before the global financial crisis. Against this backdrop, the decline in margin in 3Q2016 suggests that further improvement may be difficult in 2017.

In aggregate, the combined operating result of the big three European legacy airline groups fell by almost 9% year-on-year in 3Q2016, according to CAPA analysis of the companies' results. Air France-KLM, IAG and Lufthansa Group collectively generated an operating result of EUR3.0 billion, compared with EUR3.3 billion in 3Q2015.

The quarter remains the most important in the year, generating the highest margin and the largest profit.

The 3Q2016 results demonstrate that the quarter remained broadly healthy, both in terms of margin and its importance to the year.

However, the fall in margin does not augur well for the direction of change for the big three in FY2016 and beyond.

It follows three straight years of gains in their collective margin for the full year. Moreover, the improving year-on-year trend had continued into 1H2016.

In 1H2016 the big three legacy airline groups represented 65% of revenue and 52% of ASKs generated by the listed 15 principal European airline groups.

Quite simply, the deterioration in the aggregate operating margin of Europe's big three legacy airline groups was caused by the fact that total revenue per ASK (RASK) fell more rapidly than total operating cost per ASK (CASK).

This further weakening in the unit revenue environment reflected the highly competitive nature of the market in Europe, exacerbated by geopolitical uncertainties. In addition, an increase in the pace of capacity growth by the big three, both collectively (albeit modestly) and in the market overall, has contributed to downward yield pressure.

Each suffered a fall in passenger RASK of 6% to 7%, at constant currency

The three groups have broken down their underlying unit revenue weakness, primarily related to the passenger airline operations (these are their biggest activities), region by region. Although there are some differences in the way each presents the relevant data, they all provide a regional analysis of the year-on-year growth in ASKs and in passenger RASK at constant currency.

All three increased ASKs by around 4% (adjusting for the addition of Aer Lingus in the case of IAG).

IAG's reported ASK growth was 9.6%, but this was an increase of 4.4% without Aer Lingus. IAG's biggest decline in constant currency passenger RASK was on routes to Asia Pacific, where it dropped by 10.9%. This reflected its strong capacity increase to the region, where it grew ASKs by 10.5%, and the depressed unit revenue environment also felt by the other two in Asia.

On the North Atlantic IAG's passenger RASK fell by 8.0% at constant currency, partly reflecting the mix effect of Aer Lingus (which is lower-yield than IAG's other North Atlantic airlines).

In Latin America and Europe it dropped by almost 7%, and in domestic markets and AMESA (Africa, Middle East, South Asia) it fell by approximately 4%. 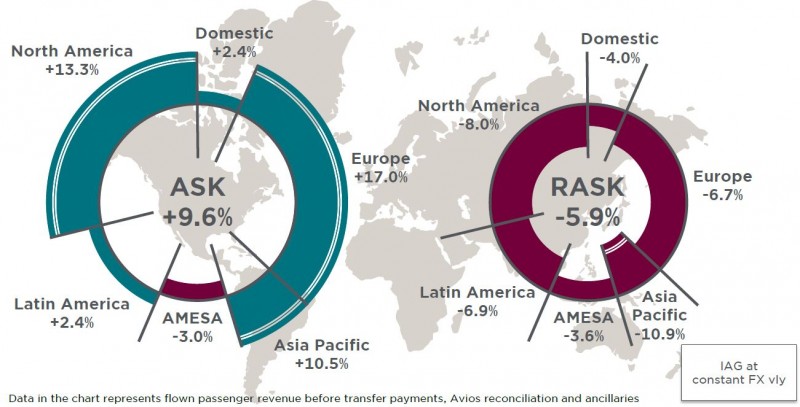 Air France-KLM kept its total ASKs flat year-on-year (+0.1%) in 3Q2016. Its biggest fall in constant currency passenger RASK to a major region was on routes to Asia, where RASK fell by 8.0% (in spite of a 6.3% cut in ASKs). Its North American network only fared slightly better, with a 7.6% fall.

In Africa and Middle East the decline was limited to 2.8%. Its other long haul regions, Latin America and the Caribbean & Indian Ocean, experienced 6% drops in passenger RASK at constant currency.

On its medium haul network Air France-KLM's passenger RASK fell by 6.7% at constant currency. It actually increased by 0.6% on medium haul point-to-point routes, helped by a 6.3% cut in ASKs. 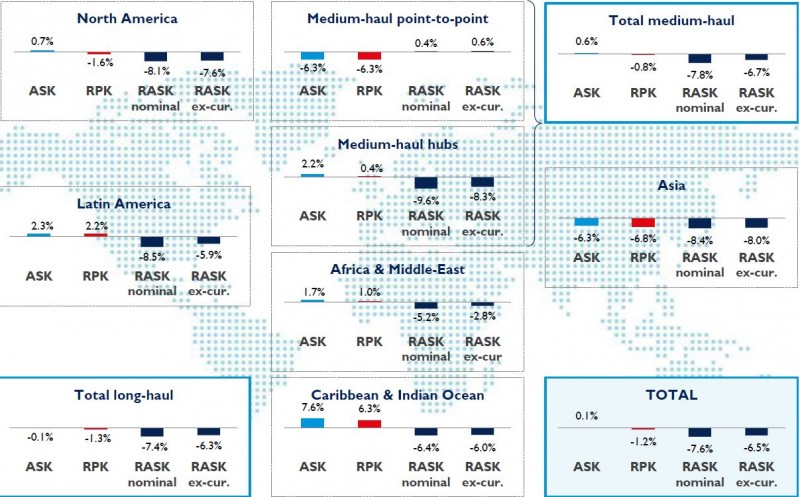 Lufthansa Group increased its ASKs by 4.0% in 3Q2016. It suffered its heaviest constant currency RASK on its Americas network, where RASK plummeted by 12.2%. ASK growth to the Americas was very high, at 10.7%.

Lufthansa Group also felt a big drop in passenger RASK at constant currency in Asia Pacific, with a 7.8% decline, in spite of cutting ASKs by 0.6%. In Middle East/Africa it fell by only 1.8% (helped by an 8.0% ASK cut), and in its Europe network it dropped by 2.9%. 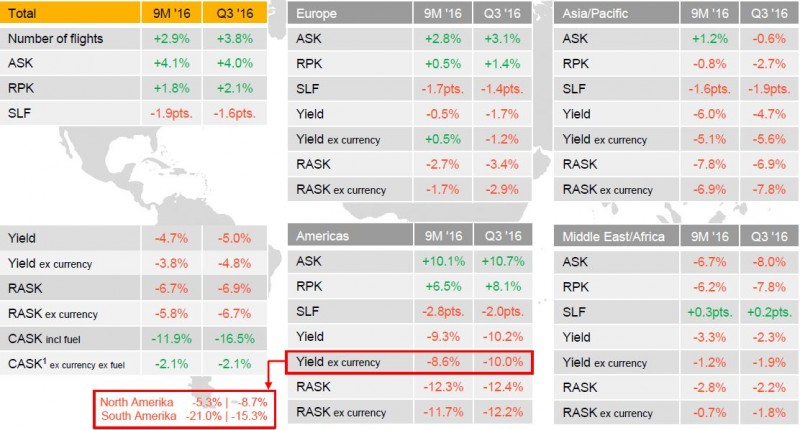 IAG reported strongest margin performance of the three in 3Q2016

At the individual group level all three reported a drop in revenue and in operating profit in 3Q2016. However IAG kept its 3Q2016 operating margin fractionally above last year's level, since costs fell slightly more rapidly than revenue. Air France-KLM and Lufthansa Group both suffered a fall in operating margin in 3Q2016.

Lufthansa's margin of 11.9% ranked between the other two, but was closer to Air France-KLM's than IAG's.

But all three improved their operating results and margins for 9M2016

In spite of the margin reduction for Air France-KLM and Lufthansa (and for the big three collectively), their profit and margin improvement in 1H2016 was sufficient to give them all a gain in both operating result and operating margin for 9M2016. IAG even managed a slight increase in revenue in 9M2016 (up 0.9%).

All three may still report improved operating margin for FY2016

The results of the three groups for 9M2016, together with their comments on the outlook, suggest that they should report improved operating margins for FY2016.

IAG has a target operating result of EUR2.5 billion in 2016, compared with EUR2.3 billion in 2015. Lufthansa Group expects a similar adjusted EBIT in 2016 to last year's EUR1.7 billion (the operating result measure used by CAPA in this analysis subtracts results from equity investments from Lufthansa's adjusted EBIT in order to improve comparability with the other two).

Air France-KLM has not given a profit target for 2016, but the analysts' consensus forecast on its investor relations website gives an operating result forecast of EUR947 million – which is 16% higher than the 2015 figure of EUR816 million.

With operating results for each of the three expected to be flat or up on last year, and revenue likely to be down or flat, operating margins should grow in 2016 if these forecasts prove accurate. This could take the combined big three margin higher than its previous cyclical peak of 6.3% reached in 2007.

However, there is considerable uncertainty as to whether or not this can be repeated in 2017. Unit revenues are likely to continue to come under pressure in the winter season as capacity growth accelerates in European markets.

The big three legacy airline groups are concentrating on improving their cost efficiency, but there may be less assistance from lower fuel prices to cut unit costs into 2017.

Europe's big three legacy airline groups collectively recorded three successive years of margin improvement in 2013, 2014 and 2015. IAG is already ahead of the pro forma margin that it reached at the previous cyclical peak in 2007 (calculated from the sum of Iberia and British Airways results for the years before they merged in 2011).

Lufthansa is close to its previous peak margin, while Air France-KLM remains below its 2007 level (see chart below). 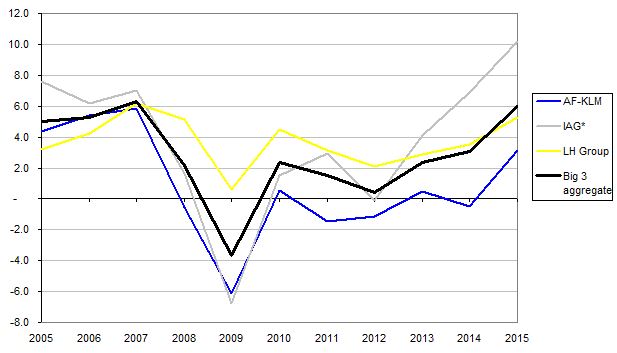 The big three's combined margins broadly reflect the aggregate margins of all European airlines as tracked by IATA in its regional profitability analysis of the world airline industry. Although the bigger European LCCs such as Ryanair and easyJet have been more profitable than the big legacy airlines, this is balanced by less profitable LCCs and smaller flag carriers.

According to CAPA's comparison of the combined operating margin of the big three legacy groups with overall data for European airline margins from IATA, the big three's margin superiority over the European sector as a whole is narrower in the current cyclical upswing than it was in 2006/2007 (see chart below). 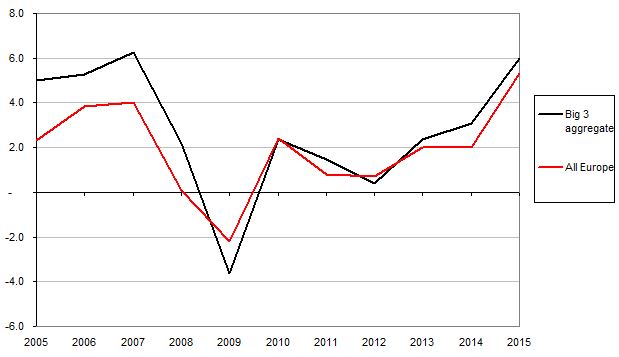 This historical analysis demonstrates that European airline margins are at levels that are similar to historic peaks. This does not necessarily mean that they must inevitably start to fall.

Nevertheless, the fall in the collective margin of Europe's three largest legacy airline groups in 3Q2016, which is the most important quarter, may be a warning sign that the cyclical upswing for European airlines is running out of steam.

This raises the importance of vigilant cost management - now, not later. Improved profitability and the reduction in fuel prices has disguised some of the cracks that begin to appear once the stern focus on cost is relaxed. But with a soft revenue environment, reducing costs at this stage will prove essential once further RASK declines occur.