Reports have emerged that Air France-KLM and Delta Air Lines are working together to examine the potential of launching a bid for Virgin Atlantic. The two Skyteam carriers have reportedly hired Goldman Sachs to advise on a bid.

Virgin Atlantic did not comment directly on any bid from the carriers, but stated it was not surprised that there was interest in it.

In Jan-2011, Virgin Atlantic Airways founder and President Sir Richard Branson stated the carrier plans to join a global alliance with an agreement expected to be reached within 12 months. He said has was “reluctantly looking” at selling down the Virgin Group’s stake in Virgin Atlantic, to ensure it survives the growing competition on many key routes. The carrier has hired Deutsche Bank to explore its options after British Airways gained approval to increase trans-Atlantic cooperation with American Airlines.

Shares in American markets were generally lower, with Republic Airways dipping 2.6%. The major exception was Hawaiian Airlines which gained 3.1%. 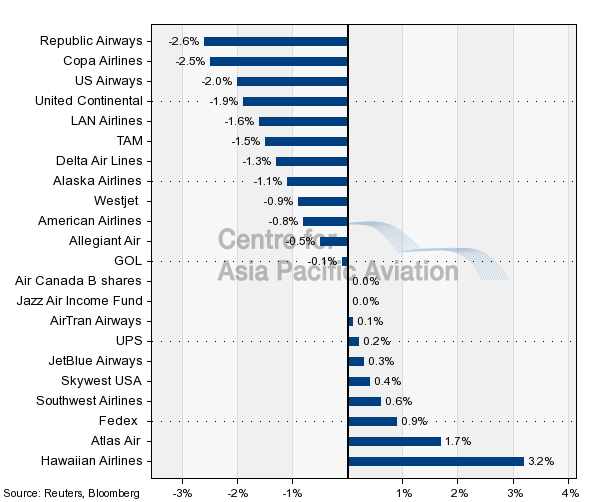