Air Canada-B (+23.5%) shares soared yesterday (30-Jul-09), a continuation of yesterday’s rise, following its announcement it has arranged CAD1.02 billion (USD925.3 million) in financing, alleviating concerns the carrier will be forced to file for bankruptcy in the short term.

COPA (-4.3%) suffered the largest drop of the day, after being downgraded from Neutral to Overweight by JP Morgan.

Continental (-3.8%) and United Airlines (-0.7%), as American Airlines (+0.4%), Delta Airlines (+0.4%) and US Airways (+0.7%) shares flatlined, as a result of higher oil prices (+5.77%) and IATA’s international traffic report, showing an 8.9% fall year-on-year in traffic in North America. Continental led the fall, potentially due to Morningstar’s forecast shares would fall in the short term due to low business demand.

Meanwhile, Southwest (+0.8%) remained relatively flat, but this may change on 31-Jul-09, following its announcement it is currently preparing a bid to acquire Denver-based Frontier Airlines. See below and separate report: Southwest eyes Frontier. The numbers add up 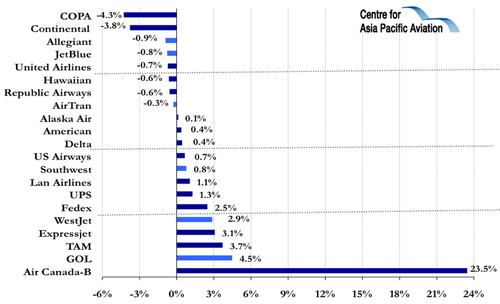 Southwest preparing bid for Frontier, worth a minimum

Southwest (+0.8%) announced plans yesterday to bid for Frontier Airlines, which is to be sold at a bankruptcy court auction next month. The carrier has submitted a nonbinding proposal, worth a minimum of USD113.6 million, which is in excess of the bid currently filed by Republic Airways (-0.6%). The carrier stated the proposed acquisition would allow it to expand its network and boost competition in Denver and other cities. Frontier currently expects to emerge from Chapter 11 in the northern Autumn 2009.

Meanwhile, Midwest Airlines’ USD31 million sale to Republic Airways is to close on 31-Jul-09. Republic stated the sale will not be affected by Southwest’s bid.