Air Canada B shares (up another 28.6%, after a 48.9% increase on Wednesday) continued their rise into the stratosphere (more below).

US Airways was down (-20.6%) on the back of a USD150 million stock offering “for general corporate purposes” (more below).

But Latin American carriers, TAM (+14.8%) and COPA (12.0%) both rose strongly, as they issued positive profit figures for 1Q09. Brazil’s GOL (+6.1%) also featured strongly, as the local economy gained in optimism (more below).

COPA Holdings, meanwhile reported improved net income for the first quarter of USD71.6 million, up from USD39.5 million in 1Q08. COPA is the parent of both COPA Airlines and Aero Republica. 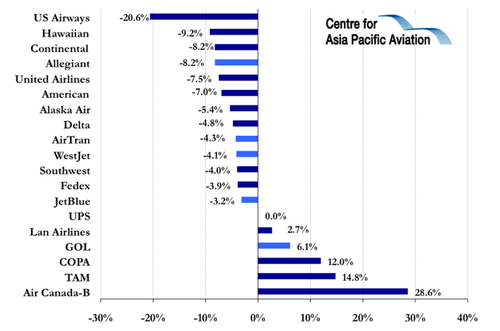 Air Canada’s rise was attributed by some observers as being due to the effect of the new open skies agreement with the EU. This brings with it for example an increase in permissible foreign airline ownership of 49%, introducing the possibility of Lufthansa acquiring a large minority holding.

However, this agreement is hardly a surprise and - unless there are new rumours emanating either from Lufthansa or from Air Canada of an acquisition – the possibility would appear remote at this stage (although Lufthansa did not unequivocally reject the prospect of a purchase).

The more likely reason for the abrupt rise is that the airline’s stock had been heavily shorted in the expectation of bankruptcy and that an uptick in buying caused a reaction of short-covering.

Apart from the predictable endemic nervousness of the market when companies undertake capital raisings these days, US Airways’ share price suffered from a dilution of value of around 15%, as a result of the issuance. So, the 20% fall in price is perhaps not as bad as it might seem at first blush in the current market.

The following is an extract from US Airways’ media release on 6-May-09:

“Citi and Morgan Stanley are the joint book-running managers for both offerings.”

The reissuance was a result of “the recognition of deferred income and social contribution taxes and assets arising from sale and lease-back operations.”

The following is the text of GOL’s announcement:

“During conclusion of the 2008 20-F, the report detailing the Company’s annual operating and financial activities in line with the regulations of the SEC (U.S. Securities and Exchange Commission), GOL’s executive officers perceived the need to adjust the financial statements in IFRS and BRGAAP (including the adoption of Law 11348/07 and Presidential Decree 449/08), both of which were published on March 20, 2009 in Brazil and the United States.

This occurred because the publication of the financial statements precedes the preparation of the 20-F. The adjustments in question are essentially limited to the recognition of deferred income and social contribution taxes and assets arising from sale and lease-back operations during the adoption of the new
accounting practices (IFRS and Law 11638).

The main reasons that led the Company to republish its financial statements are summarized below:

•    We do not make use of automation when consolidating our financial statements but adopt manual processes in spreadsheets, which may involve a considerable degree of complexity.

•    The merger with VRG and our parallel transition to IFRS led to more time and effort being spent on the preparation of our financial statements, to the detriment of the time needed to analyze the financial statement close process and the internal controls related thereto.

•    This shift in focus could not be mitigated due to the higher-than-ideal turnover of the personnel involved in the audit and the preparation of our financial statements.
The Company has already taken the necessary measures to remedy the above-mentioned questions, including improving automation procedures, and strengthening  pro-active management through the installation of internal accounting and tax committees in order to keep income taxes and related deferrals, as well as all future non-habitual or non-recurring transactions under close and constant scrutiny.

Summary of the Adjustments to the Financial Statements in IFRS

•    Adjustment to the acquisition price of VRG, which resulted in the revision of provisions in the balance sheet and the recognition of an income tax benefit in the 2007 income statement.

•    Adjustment to deferred tax assets related to temporary differences in the accounting of aircraft leases in 2008.

•    Adjustments aimed at registering sale and leaseback assets on a gross rather than the previously reported net basis in the balance sheets.”