The AMEX Airline Index slipped (-0.9%) on Monday, despite moving into positive territory in morning trading and a number of analyst stock upgrades. The Dow (+0.8%) ended trading up, as oil prices (+1.5%) also increased, to USD78.13.

Air Canada shares (+1.9%) regained some ground on Monday, following an upgrade of its stock rating to ‘Buy’ from a previous ‘Hold’ by analysts at Genuity Capital Markets. Genuity recently led underwriters in the raising of CAD250 million for the carrier through a share issue. Genuity identified this, combined with the carrier’s CAD1 billion in financing raised earlier this year and plans to improve its balance sheet by CAD500 million by 2012, as reasons behind upgrading its valuation of the stock.

American Airlines (-2.8%) meanwhile was removed from Standard & Poor’s credit watch on Friday (30-Oct-2009), due to improvements in liquidity and an improved outlook for the US airline industry. However, Standard & Poor’s maintained a negative outlook for American, stating the carrier still has a “very weak financial profile” and remains vulnerable to “renewed revenue deterioration or sharp increases in jet fuel prices"

The carrier also saw its secured notes assigned a ‘B1’ rating by Moody’s Investor Services.

However, Next Generation warned that "consensus for 2010 remains too optimistic and given the volatile macro backdrop, the industry needs to cut capacity another 5% to 10% to stem cash flow instability", thus requiring the industry continue to consolidate.

Delta Air Lines (2.7%) saw its stock price fall despite news the Australian Competition and Consumer Commission (ACCC) has issued a draft determination proposing to grant authorisation for a JV between Virgin Blue and Delta Air Lines on their flights between Australia and the United States (trans-Pacific routes). The carriers now await approval from the US Department of Transportation.

Meanwhile, Allegiant stocks continued to perform well, up 3.2% at the end of trading, while US Airways stocks fell 4.9%. 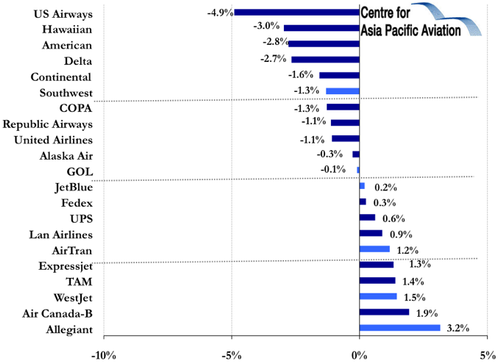