Meanwhile, shares in Cimber Sterling slipped 2.1% on Friday, the day after the carrier forecast it would witness a 29% year-on-year increase in revenues to DKK2 billion (EUR270 million) in FY2010/2011, with a 42% jump in passenger numbers and a 4% reduction in average yields.

Cimber Sterling CEO, Jacob Krogsgaard, stated the carrier has managed to offset the dramatic events over the past financial year and is confident of meeting the goal of returning to profitability by the end of the 2010/2011 financial year.

Outside the European regions, the notable share price movement of the day among the world’s LCCs was that shares in South African LCC, 1time Holdings, slumped 16.3% on Friday (after falling as much as 22% in intra-day trading to ZAR 105 cents per share) as it announced that it expects lower earnings per share when it releases its 2010 interim financial results on 30-Aug-2010. 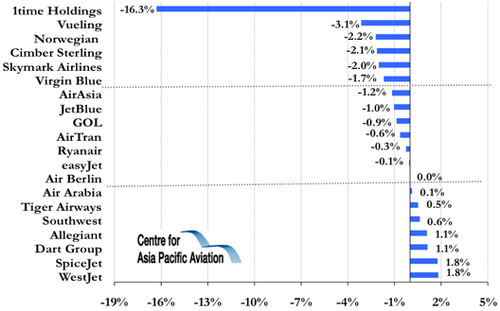