Air Arabia (1.2%) signed a JV agreement with Jordan's Tantash Group to launch Air Arabia Jordan, Jordan's first LCC. The new LCC will serve destinations across Europe, the Middle East and North Africa and will be managed by the Air Arabia Group.

As CAPA predicted in Mar-2010 in its Monthly Essential Middle East report, "a focused, well-funded LCC operation could be imminent in Jordan as the country's significant market liberalisation efforts continue".

IATA revised its 2010 passenger and cargo traffic forecast for the Middle East and Africa with the industry body predicting a rise in traffic for both regions compared with its Mar-2010 forecast. Traffic growth in the Middle East is now expected to reach close to 20%.

IATA now expects Middle East carriers to post a profit of USD100 million in 2010, their first since 2005. This is significantly better than the previously forecast USD400 million loss and the USD600 million loss in 2009. GDP growth of 4.3% is outstripping the global average and Gulf carriers continue to gain market share through their hubs for Europe to Asia Pacific traffic even as capacity is being added at a more cautious rate, according to IATA. 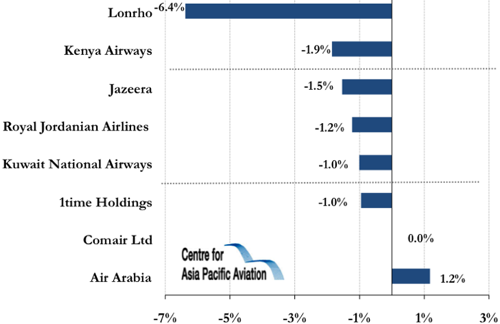