In line with movements on key global markets, LCC shares ended mostly lower on Wednesday 10-Nov-2010. Mounting concerns over sovereign-debt issues in the EU and possible further policy tightening in China dragged down major indices in Europe and Asia.

Sharjah-based LCC Air Arabia (+0.3) reported a 5.6% fall in Q3 net profits yesterday, but as CEO Adel Ali predicted, the result was better than analyst expectations. Net profit came in at AED136 million (USD37 million) on revenues of AED568 million. Load factor in the quarter was 84% (+8.5 ppts).

Adel Ali said he expects to launch the carrier's fourth hub in Jordan in 2011. The pan-Arabian LCC has subsidiaries in Egypt and Morocco.

AirAsia down on profit downgrade

Meanwhile, analysts have stated that Firefly could become the lowest-cost operator in the Malaysian market upon the delivery of new B737-800 aircraft. Firefly will configure its B737-800 aircraft with 189 seats, nine more seats than AirAsia’s typical A320 configuration.

AmResearch Sdn Bhd, quoted by The Star, commented: “Our back-of-the-envelope calculation suggests that Firefly’s unit cost will likely be 5% lower than that of AirAsia’s at 11.2 sen. This is purely coming from a higher seat count per aircraft, all else being equal." The company, however, added: “Investors are better off with AirAsia for exposure to LCC play given its far superior route network and fleet size, which enables it to better tap the growing regional demand and provides it the critical mass to enable it to capitalise on ancillary initiatives.”

HwangDBS Vickers Research and ECM Libra Investment Research in separate reports added that lower than peer unit costs would be achievable with the carrier likely to ride on MAS’ existing infrastructure and resources.

Among other LCCs Norwegian’s (-3.6%) recent gains halted yesterday and easyJet was down 2.8%. Both the OBX Index and the FTSE weakened yesterday.

SpiceJet (+2.5%), Air Berlin (+2.3%) and Dart Group (+1.2%) shrugged of losses on their respective markets and were the strongest gainers yesterday. 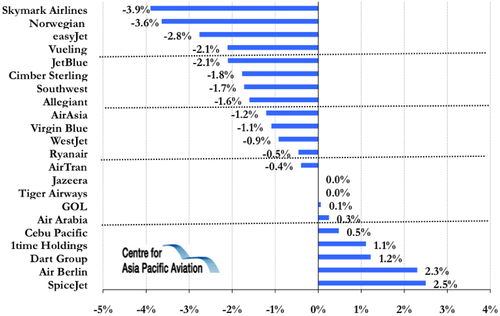