The airline provides direct flights from its base in Casablanca to the cities of Brussels, Montpellier, Paris, Lyon, Basel-Mulhouse, Milan, Bologna, Barcelona, Istanbul and Amsterdam. Starting in Nov-2010, Air Arabia (Maroc) will offer three weekly flights from Cologne (Germany) via Fes or Nador to Casablanca.

Qatar Aviation Leasing reportedly launched syndication of a USD650 million loan agreed earlier this year in order to reduce the pricing. Qatar Aviation, set up to purchase aircraft and lease them to Qatar Airways, signed a USD650 million, three-year loan in Mar-2010 with a margin of 250 basis points (bps) over LIBOR, with the new agreement to see pricing halve to 125 bps, according to reports. The new loan will also carry a sovereign guarantee and has been underwritten. Of the 30 banks reportedly in the original syndicate, 16 are from the Gulf region.

Middle East shares were mostly down with Jazeera (-3.9%) and Kuwait National Airways (-1.2%) down while Royal Jordanian remained stable. 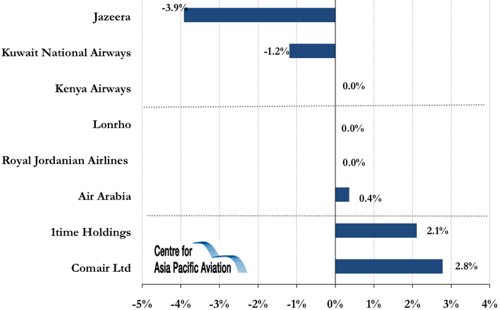