AIG to pull out of the sale of ILFC? – Suppliers Share Wrap

Another major leasing company may soon be off the market, just a few weeks after the HNA Group completed the acquisition of Allco’s aircraft leasing arm.

According to a report in the Financial Times, American Insurance Group (AIG) plans to withdraw the sale of ILFC, after unsuccessfully attempting to sell the unit, the world’s second largest leasing company, for more than 12 months. The unit was to have been sold to help repay USD182.3 billion in US Government aid handed to AIG in 2008, of which more than USD120 billion was still outstanding, as of Oct-2009.

No formal announcement has been made, but AIG has reportedly pulled out from plans to sell the unit, one of its few consistently profitable companies, as it does not expect to derive sufficient profit from the sale. ILFC’s USD30 billion debt burden has proved too great a deterrent to prospective buyers, in a market where easy access to credit is still less than certain.

Also hurting the sale prospects has been the downgrades to ILFC's credit status. Last week, Standard & Poor's cut its ratings on ILFC's corporate credit rating to 'BBB-minus' and cut its unsecured debt three steps to 'BB-plus'.

Rather than sell the unit at a significant discount on its book value (with discount estimates at more than 50%), AIG has decided to retain the unit, which will reportedly undergo a restructuring and significant management shake-up. Co-founder and CEO, Steven Udvar-Hazy is expected to leave ILFC. He had been attempting to acquire approximately 10% of ILFC's aircraft portfolio for USD4 billion, with a consortium of investors including Onex Corp and Greenbriar Equity Group.

Current ILFC president and COO, John Plueger, may reportedly replace Udvar-Hazy as CEO. The position of Chairman at the company was transferred from Udvar-Hazy to former Northwest Airlines CEO, Douglas Steenland, in Dec-2009.

Aircraft lessors continued their downward slide on Tuesday, with Babcock & Brown Air dropping 1.9%, while Genesis Lease and AerCap both slipped 0.9%. Aercastle was also down, losing 1.5%. 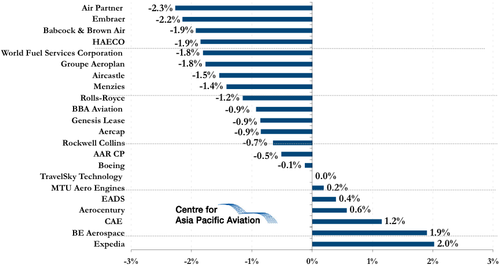