Ariana Afghan Airlines is planning a long overdue fleet renewal project which will enable the government owned flag carrier to replace its ageing fleet and resume growth. Ariana is aiming to grow its fleet from four aircraft to seven aircraft by the end of 2019 as three 737-800s, two 767-200s and two ATR 42s are acquired.

The airline aims to launch five new international routes with the 737-800s, extending Ariana’s network to 12 international destinations. The ATR 42s will be used to expand the domestic network beyond the current five destinations.

Ariana is a tiny flag carrier, carrying less than 500,000 annual passengers, in a small and challenging market. Competition is intense as Afghanistan also has two privately owned airlines and an open international market served by aggressive foreign airlines. Consolidation is inevitable, particularly if Ariana succeeds at expanding in both the domestic and international markets.

Ariana has struggled as competition has intensified

Ariana is one of Asia’s oldest flag carriers and has been operating since 1955. Ariana understandably languished during the Taliban era and has been impacted by the instability of its home market. In the post Taliban era the Afghanistan market has expanded significantly, but Ariana has been impacted by liberalisation, which has led to competition from new privately owned local airlines and foreign airlines.

Ariana has the largest international network among Afghan carriers but its share of the international market is only 14% to 15%. Ariana tells CAPA that it carried slightly less than 500,000 passengers in 2016, including 30,000 passengers on charter flights to Saudi Arabia during Hajj (when it wet leases a 747).

Ariana currently serves 12 destinations, including five in Afghanistan, with a fleet of only four aircraft. Its active fleet consists of two A310s and two 737-400s – all of which are at least 24 years old.

Ariana Afghan Airlines average fleet age: as of May-2017 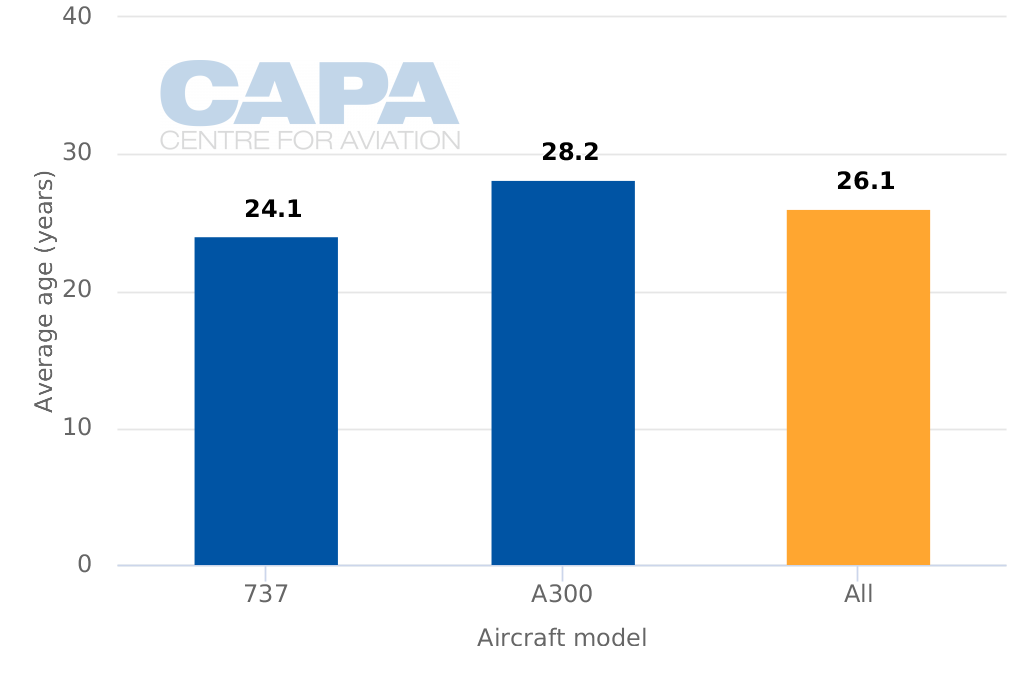 Ariana tells CAPA it has secured government approval to renew the entire fleet and grow to seven aircraft by the end of 2019. Ariana’s new fleet plan includes the acquisition of seven second hand aircraft over the next two years, including three 737-800s, two 767-200s and two ATR 42s.

Ariana is aiming to take delivery of the first ATR 42 and 737-800 by the end of 2017, enabling the airline to start executing its network expansion plan. All seven aircraft are expected to be delivered by the end of 2019, at which point the A310s and 737-400s will be phased out.

The existing four active aircraft will be retired gradually in 2018 and 2019. Ariana’s 737-400s recently completed fresh C checks and the airline intends to use these aircraft for another two years before phasing them out entirely.

Ariana now uses A310s for most of its international flights except Dubai, where authorities prohibit Ariana from operating the A310. The 737-400s are mainly used for all the Dubai services and in the domestic market, although on occasion some of the other international routes are also operated with the 737-400s.

Guangzhou, Dushanbe (Tajikistan) and Tehran are the initial priorities for new routes and could be launched by the end of 2017 with the first 737-800. Ashgabat in Turkmenistan and Tashkent in Uzbekistan are also on the wish list, but could prove difficult to sustain.

Tajikistan, Turkmenistan and Uzbekistan are all Central Asian countries, as well as members of the CIS. The Afghan government is keen to expand ties with the Central Asia and CIS region. Passengers travelling between Central Asia and Afghanistan now generally have to travel via Dubai or Istanbul – routings that require significant backtracking.

However, traffic between Afghanistan and Central Asia is relatively limited, and in most cases demand is not sufficient to warrant direct services. Emirates and flydubai also offer very competitive fares, despite the backtracking, and provide the frequency that Ariana will never be able to offer.

Ariana also has the opportunity to add capacity on several of its existing routes as it resumes fleet expansion. Only one of Ariana’s international routes is currently operated daily.

Ariana also operates daily services on the main domestic routes of Kabul to Kandahar and Herat. Mazar-e-Sharif and a fifth airport in Afghanistan, Zaranj, are each only served with one weekly flight.

Most airports in Afghanistan do not have regular services 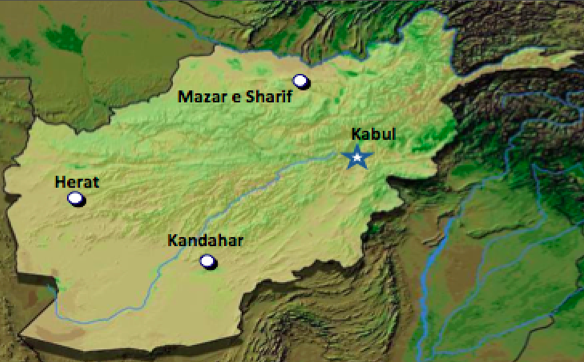 In the domestic market, all three airlines (Ariana, Kam Air and Safi Airways) compete on the main domestic routes of Kabul to Kandahar and Herat. Kam Air has by far the largest domestic network and has the largest active fleet among the three Afghan carriers. Kam serves 11 airports in Afghanistan, including six that are not served by any other airline.

However, some of Kam’s domestic destinations are not served regularly. Ariana is intending to add more regular services to Kam’s smaller destinations as it starts operating ATR 42s. It also may start serving some of the airports that do not currently have any scheduled service.

The Civil Aviation Authority of Afghanistan now operates all the smaller airports and is in the process of fully taking over the Kabul airport. NATO previously operated all the airports in Afghanistan, for 12 years. The Afghanistan CAA took over air traffic control operations from NATO in 2015.

In addition to competing on the two main domestic routes, Ariana, Kam and Safi also all compete on the Kabul-Dubai and Kabul-New Delhi routes. Ariana and Kam (but not Safi) compete on Kabul-Istanbul, while Kam and Safi (but not Ariana) compete on Kabul-Islamabad. Ariana is the only Afghan airline serving Ankara, Jeddah, Moscow and Urumqi, while Kam is the only Afghan airline serving Almaty (in the Central Asian country of Kazakhstan).

Kabul to Dubai, New Delhi, Istanbul, Islamabad and Tehran are the five largest international routes from Afghanistan based on current international seat capacity. They are also the only destinations currently served by foreign airlines. (When Turkish’s thrice weekly A319 service from Istanbul to Mazar e Sharif is included, there are only six international routes served by scheduled foreign passenger airlines.)

The foreign competitors have the advantage of being able to offer connections beyond their hubs, particularly Emirates, flydubai and Turkish. This enables these airlines – the three largest foreign airlines in Afghanistan – to capture much larger market shares on the main international routes than can any of the Afghan operators.

The Emirates and flydubai combination is particularly strong. Emirates operates one daily flight to Kabul using 777s, and flydubai has four daily flights on the route with 737-800s. Turkish has nine weekly flights from Kabul to Istanbul, all using A330s.

Local airlines have been impacted by Afghanistan’s open skies policy

Dubai is an essential route for all the Afghan carriers as it is the most popular international destination for Afghans. However, the route is extremely competitive, and fares are generally not any higher than domestic fares – although the flight to Dubai is three hours, compared to a typical one hour flight in the domestic market.

The main domestic routes are generally profitable for Afghan carriers, but competing in the international market against larger and stronger foreign competitors has been a challenge. Over the past several years Afghan carriers have repeatedly complained about Afghanistan’s open skies policy, which has provided a liberal environment for foreign airlines seeking to launch services to Afghanistan or add capacity.

The liberal policy has benefitted the Afghanistan market overall, providing local citizens and visitors with cheaper fares and more options. It is important for the government to maintain this policy and not protect any of its local airlines, since open skies provides significant positive economic benefit.

Afghanistan has also been an open market for more than a decade, when it comes to new local startups. This liberal approach, which is rather unusual for the region, has resulted in more local competition.

However, having three local airlines in a country the size of Afghanistan is not sustainable. Afghanistan is a relatively big country, with a population of more than 30 million, but income levels are low – the GDP per capita is approximately USD600.

Consolidation in the Afghan airline sector has seemed inevitable for several years, but has far failed to materialise. Mergers have been discussed, and at times one of the privately owned airlines has been close to shutting down. Within the past year Ariana’s board rejected a government proposal to merge the three airlines.

With its new expansion plan Ariana seems to be betting that at least one privately owned airline will exit. Depending on how the market unfolds over the next year or two, Ariana could potentially accelerate or slow down expansion.

The private airlines would naturally be hoping for the government to pull the plug on Ariana rather than invest in fleet renewal and expansion. Whether Afghanistan still needs a government owned airline, given the competition from private local airlines and foreign airlines, is certainly debatable.

However, at least so far, Afghanistan remains committed to maintaining a government owned airline and it seems to have decided to invest in fleet renewal at Ariana rather than pull the plug. The main premise is that a government owned airline is still necessary in case security issues or instability re-emerge. In such an environment Ariana has the potentially crucial role of maintaining services to communities that could be cut off if private local airlines (and foreign airlines) were unable to maintain operations.

Given Afghanistan’s history, this is a valid reason for retaining a government airline. However, Ariana could continue its domestic role without having to invest in international expansion, which is relatively risky given the foreign competition and relatively small size of the routes it is planning to launch.

The government certainly has to invest in renewing the Ariana fleet in order for the airline to continue operating. The question will become how much the relatively poor Afghan government will be willing to invest in its flag carrier. Acquiring replacement aircraft is a more obvious proposition than expanding what will likely remain an unprofitable international operation.